The reason that Batman has been around so long is that, at its best, the comics are a heightened reflection of the hopes of every person. Sure, the near-century of stories means there’s plenty of silly stuff, too, but for my money, the best Batman stories are ones where Batman is struggling against a world that just does not care. And this is why I want to talk about Batman: The Long Halloween. The Long Halloween is a careful balancing act, juggling a whole host of plots and subplots with care and precision. Despite the superhero theatrics and cartoony character designs, at its core, it’s a horror story for its central character, one that is downbeat and tragic.

For those that may not have read this comic, The Long Halloween is a story set in Batman’s earlier years. He doesn’t have a Robin yet; he works closely with Jim Gordon in an attempt to bend but not break the justice system, and he puts all his faith into Harvey Dent, the new up-and-coming DA for Gotham City. This also plays up the detective side of Batman more than the movies or many comics do; the core is a murder mystery concerning someone in a trench coat and hat who murders people on the nights of holidays. Each victim is somehow related to the Falcone crime family, and as the body count goes higher and higher, suspicion and paranoia seep into the core triangle of Batman, Jim, and Harvey. Eventually, Harvey, previously a shining light for Gotham, is deformed from acid being thrown on his face and turns into the villainous Two-Face. I’m going to be discussing this comic assuming you’ve read it, so if you want to avoid spoilers, go off and read it first. It’s great. 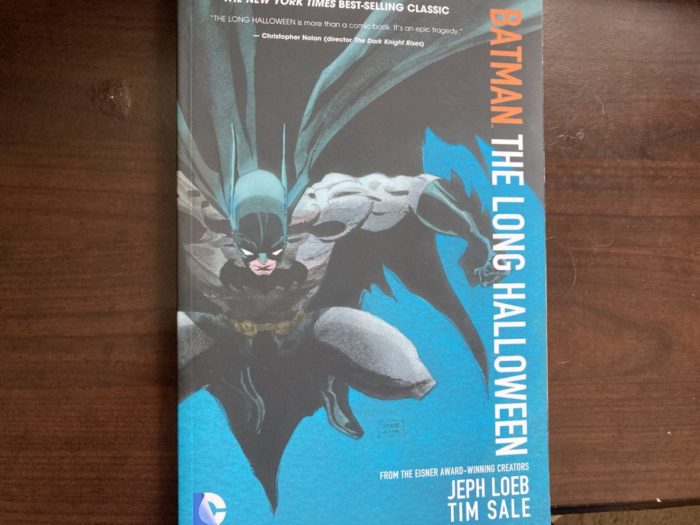 Writer Jeph Loeb continued the work started in Frank Miller’s Batman: Year One. That storyline forever changed Batman, taking a campy, often silly character and turned him into something more grounded in our world. In that storyline, Batman wasn’t fighting goofy-themed villains whose sole motivation was money. No, he was up against the grime and filth festering in Gotham City, and The Long Halloween takes that aesthetic and tone and pushes everything into more epic territory. Even though each chapter features Batman facing off against one of his many villains, the core story is more about trying to take down the mob.

Christopher Nolan’s Dark Knight trilogy took more than a little inspiration from this storyline, and it’s easy to see why. In this story, Batman isn’t…optimistic, necessarily, but he’s hopeful. As is always the case, he stands firm with his One Rule. He absolutely will not claim another life, and he believes in the justice system. He wants redemption for Gotham, not cleansing. He wants to make it better than it was by helping those who inhabit it instead of taking the lives of the many evil people who live there. Jim Gordon and Harvey Dent share this sentiment, and it’s this hope that ultimately leads to the downfall of Dent and turns this into a nightmare for Batman—one that he doesn’t even know about.

The murders that make up the book’s central mystery are all the same. Someone in a trench coat leaves behind a .22 caliber pistol with a baby bottle nipple as a silencer and tape around the grip. They never leave any evidence, and as the suspect list grows and grows, the idea that there might be more than one killer creeps into the back of Batman’s mind. And it turns out that he’s right. A man named Alberto, the son of Carmine Falcone, confesses to a whole mess of killings. Except there’s much more to it than that.

Dent unleashes a wave of chaos on Gotham when he lets loose the inmates of Arkham Asylum, and Batman and Jim Gordon work to round them all up. It’s all a ploy, a distraction tactic that Dent takes advantage of when he kills Carmine Falcone in an act of revenge for disfiguring him. At this point, Two-Face has completely embraced the duality that he represents; he is both Harvey, the well-meaning District Attorney who wanted to do right by the city he loves, and he is also Two-Face, an egomaniac with a real chip on his shoulder and a desire for the world to be fair and balanced. Two-Face confesses to more of the killings but says that there was another Holiday Killer. 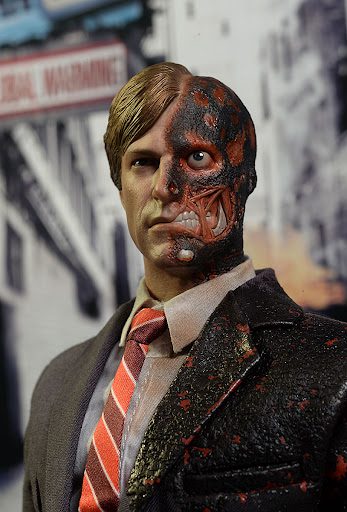 Batman assumes he means Alberto, and as such considers it case closed. But the ending to The Long Halloween is why I consider it to be a masterful dissection of Batman as he applies to the real world. Crime is mostly a result of the failings of an economic system; I think it’s fair to say that most people who steal or become involved in organized crime don’t necessarily start off by thinking they’re going to become a criminal. No, it’s desperate circumstances that lead to people stealing, murdering, and dealing dangerous drugs. Two-Face as he’s portrayed in The Long Halloween is a fantastic example of this very idea; he starts off idealistic, almost naïve in a way, and eventually, the darkness that corrupts Gotham claims him, too. There’s a fake-out death at the end, and I think it would have been a fine way to end his character arc if this wasn’t a superhero comic and continuity wasn’t constantly being messed with by different authors. Here’s the thing, though; Batman still holds the naiveté that Two-Face did away with. He thinks the killings have been solved, and even though he’s lost a friend, he is confident that that’s all there was to this case.

The truth is far darker. Yes, Alberto and Harvey really did murder several people, but there was a third play that no one knew about: Harvey’s very pregnant wife Gilda. She saw what a toll Harvey’s job was taking on him and decided to commit copycat murders to try and lighten the load for him. It’s a seriously dark turn and one that perfectly summarizes the theme of many of Batman’s best villains. Everyone is just one or two bad days away from becoming a villain. And this is the reason that I say The Long Halloween is a horror story specifically for Batman; Gilda was largely removed from many of the comic’s events, and she still succumbed to the darkness plaguing Gotham. For all his belief that people can be better, Batman still couldn’t see that the darkness of Gotham’s crime extends to people who seemingly have nothing to do with it.

The title The Long Halloween has many applications to this particular story. On a very literal level, Batman must fight one of his many costumed supervillains in each chapter, and that’s pretty fun. But on a deeper, level, it refers to the idea that maybe people are just pretending to not be monsters. Halloween is a time where people dress up as the things that scare them (which Bruce Wayne does; it’s well known he’s scared of bats). It’s a time where they pretend to be monsters they’re not, but if a Halloween goes on long enough, if people stay in costume long enough, wouldn’t it be true that their real face is the mask, the monster, the ghoul they’ve decided to dress up as? The events of The Long Halloween brought out the worst in a lot of the comic’s cast, with Dent being the central tragic figure. It’s arguably more his story than Batman’s and all the scarier to it.

At his core, Batman represents a never-ending struggle against the darkest part of the human condition. No matter how much money he throws towards his gadgets, no matter how many thugs he beats up, no matter how many times he puts his villains away in the slammer, someone else always steps up to take their place. Even though Batman’s end goal is a theoretical end to crime as Gotham knows it, that will never happen. The first reason for that is that he’s far too lucrative a character for him to ever have a proper ending. The second is that the very system he believes in is inherently flawed, and even though it’s seemingly designed to help and save people, in the end, it just winds up creating more monsters. Even though Batman himself may not kill people, in the end, his struggle might ultimately be futile. That futility is what makes The Long Halloween so terrifying and tragic. It channels old Universal monster movies in how it makes Two-Face a tragic figure, but it also suggests that, no matter how hard we fight, we can’t overcome the darkest parts of ourselves.

Looking for more on Batman and horror? We’ve got you:

“Haunted Knight is Spooky and Halloween-ish: A Study of Fear in Gotham City”