Science fiction and horror have a lot in common. Both genres are deeply entrenched in the supernatural, unbelievable, and surreal. Most science fiction stories don’t portray the world in a positive light either and go out of their way to highlight how hostile life has become. Horror does much the same, though often through different devices.

Still, at the core of both genres is ultimately the theme of what it means to be human. Horror typically explores this by means of contrasting humanity against some kind of vicious monster or supernatural threat. Science fiction, on the other hand, likes to blur the lines around what being human even means with things like robots or other intelligent races.

Here’s why Alien is the perfect mix of thought-provoking sci-fi and classic horror.

It can be very tempting to say that Alien is just a standard horror movie in a sci-fi setting, but that would be to gloss over some pretty magnificent details. It is true though that Alien’s unmistakably sci-fi setting does much to lend the movie its feel.

That is, by no means, a bad thing however as the Alien universe is easily the most developed of any horror franchise. No other horror series of which I know has legitimate history and lore, especially when you consider the all but confirmed theories that Blade Runner and Alien take place in the same timeline.

But beyond the sci-fi setting, Alien’s cinematography is definitively based in horror. The entire middle arc of the film where the crew explores a crashed alien vessel is chocked full of found footage-style shots. The titular alien itself is almost never shown on camera, much like Jaws and a ton of other monster horror movies.

This is in distinct contrast to the average sci-fi movie, which is always putting its futuristic creations in front of you at all times with as much CGI grandeur as possible. Highly astute viewers will also notice that the average length of any given shot in Alien is pretty long. It’s the classic tell of a good slow-burn style horror movie, which Alien unmistakably is. 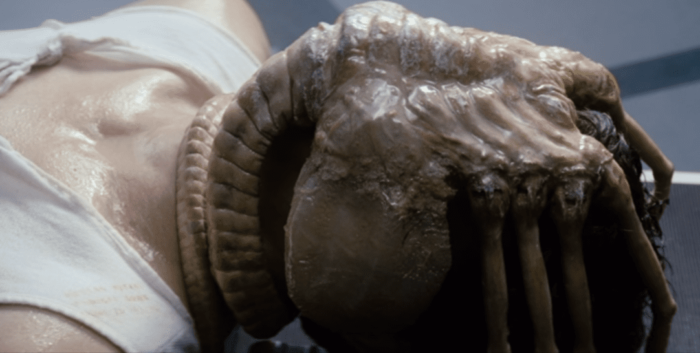 This movie is called Alien for a reason, and I’d be lying if I told you that it wasn’t really the best part of the movie…it is.

Based on the inimitable design and work of H.R. Giger, the Xenomorph as it is now known is easily one of the most spectacular monsters of all time. Everything about its design is quite literally dripping with scary. Sleek, unnervingly fleshy, sinisterly slow, and yet entirely inescapable. In every way, it is immediately iconic and you’ll never forget it.

After all this time it’s still indisputably horrifying and the Facehugger pictured above is just as freaky, if not worse. I get clammy palms just looking at it. The second mouth on the Xenomorph is also enough to make my toes curl every time.

Little details about the alien are also revealed in a way that normal horror movies rarely do. Due to the scientific equipment present on the ship, we get the joy of listening to some classic sci-fi technobabble about all the ways this monster is bad news. The acid blood is still my personal favorite.

People who really want a good time (or a very bad one depending on your definition) should give Alien: Isolation a play, as it’s genuinely the best Alien experience you can get, maybe even better than the movie itself.

Anyone who’s seen their share of horror movies knows that regardless of how solid the concept is, a bad crew of characters can sink it.

In Alien this couldn’t be further from the truth. While there are some fairly standard cliches we could fit each of these characters into, that doesn’t mean they aren’t done well. In fact, I think Alien handles the crew members with a natural grace very uncommon to your standard horror film.

These people aren’t friends, they aren’t secret lovers or anything that personal. They’re coworkers doing a job they all basically hate for different reasons. They fight, they bicker, and they’re petty with each other in exactly the way real people are. Ultimately, each character is super identifiable because you probably know someone reasonably like them.

They also aren’t stupid, something which plagues many lesser horror movies. There are only one or two moments in the entire film which make you go “don’t do that…”

Better yet, the plans the crew invent to fight off the alien are actually quite inventive and realistic, rigging up improvised weapons and using things like the ship’s ventilation system to their advantage.

Speaking of not being stupid, one of the smartest things this movie does is the inclusion of a certain synthetic character that I won’t name here. It’s a brilliant sci-fi inclusion that adds a whole new and interesting threat to the movie that you only vaguely suspect beforehand.

As I mentioned earlier, this is the way Alien tackles the major theme of both horror and science fiction in the same movie. On the one hand, we have the blood-chilling Xenomorph to remind us how fragile humanity really is, only to be walloped on the other hand by a confrontation with what being human even means.

A technical third antagonist exists in the abstract form of the ship’s computer system, not so lovingly named Mother. Mother represents the company’s interest in the situation the crew finds themselves in and let’s just say those interests don’t always line up with typical health and safety guidelines.

And at the end of the day, Sigourney Weaver as Ripley is still one of the best final girls of all time.