I’ve waited a long time to see The Green Knight. It was originally supposed to come out over a year ago, but like just about everything else in 2020, that didn’t go according to plan. Its release was delayed about fourteen months, but the wait is finally over. The movie is now out in theaters (at least in America; it was unfortunately delayed yet again in the UK), and I went to see it on opening night.

Directed by David Lowry, this movie stars a whole host of actors, including Dev Patel, Alicia Vikander, Joel Edgerton, Sarita Choudhury, Sean Harris, and Ralph Ineson. It’s an adaptation of the Arthurian fantasy poem Sir Gawain and the Green Knight, and it follows King Arthur’s nephew Gawain as he goes on a journey through magic and mysticism.

When The Green Knight begins, Gawain is a bit of a party animal, but that all changes one day at a Christmas celebration hosted by his uncle. The titular Green Knight appears and challenges anyone in the room to strike a blow against him, and if they do, they will have to meet him at a designated spot in exactly one year, when the creature will return the blow exactly as it was given.

Gawain accepts this challenge, and he beheads the knight in one shot. He thinks he’s killed it, but the thing just stands up again, reiterates the other half of the bargain, and rides away. From there, the story jumps ahead almost an entire year, and Gawain sets off on a quest to fulfill his obligation. Along the way, he encounters strange people, mythical beings, and unpredictable magic, and when he finally meets his opponent in battle one last time….well, you’ll have to watch the movie to find out what happens. I’m obviously not going to spoil the ending for you.

What I can say, though, is that The Green Knight was totally worth the wait, and I can’t wait to see it again. In particular, this movie really shines in three main areas: the cinematography, the characters, and the atmosphere. Let’s take them in order. 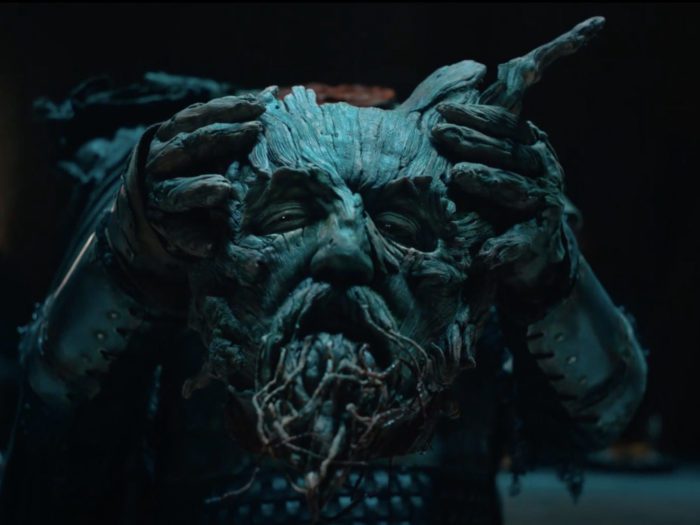 To begin, this film is beautifully shot. Even if you don’t like the story, you can’t help but be mesmerized by how great it all looks. Every frame of this movie is absolutely gorgeous, so you could take a screenshot at any random moment and you’d be guaranteed to get a great picture to hang up on a wall or use as a desktop background.

Moving on to the characters, they keep your eyes glued to the screen as well, but not in the way you might think. Usually, the best characters are the ones that are fleshed out the most or that get the most interesting things to do or say, but that’s not always the case in The Green Knight.

Other than Gawain himself, most of these characters feel more like parts of the setting than actual people. They play very specific and usually pretty short roles in their designated parts of the story, and then they’re gone. They’re basically there just to prop Gawain up, and on paper, that doesn’t sound very compelling.

But these characters are all an absolute delight to watch, and that’s due almost entirely to the performances. I didn’t notice any obvious standouts that made my jaw drop, but all the actors played their parts in such a way that I just couldn’t take my eyes off them. In particular, I have to give special mention to Sean Harris, who played King Arthur. He imbued the role with the perfect mix of royal authority and elderly frailty, and his performance was my favorite of the bunch.

On top of that, Dev Patel also deserves a lot of recognition for playing Gawain, as almost the entirety of The Green Knight stands squarely on his shoulders. The whole plot revolves around his character, so he’s on-screen just about the entire time. I didn’t think he was quite as good as Sean Harris, but I never got tired of watching him as Gawain. I was genuinely invested in the character, and that was due almost entirely to Patel’s great performance.

Finally, we have the atmosphere. This isn’t a straight-up horror movie, so it doesn’t really have scares. Instead, The Green Knight is all about the atmosphere. It fills you with a creeping sense of dread and uncertainty throughout Gawain’s entire journey, and it does this in two ways.

For starters, the film never explains its magic or its mythical beings, so you never know what to expect. You never know who Gawain is going to encounter next or what these beings are capable of, and that makes for a unique kind of tension that keeps you on the edge of your seat the entire time.

Along similar lines, the endpoint of Gawain’s journey adds its own unique layer to this tension as well. Since you know he’s going to be beheaded (or at least you think you know that…I won’t give away whether that actually happens or not), there’s a sense of inescapable dread that permeates the entire story. You know he’s marching to what appears to be his inevitable death, and that knowledge weighs on you the entire time. It gets heavier and heavier as he gets closer and closer to his destination, so even though The Green Knight isn’t scary, this is definitely a dark fantasy.

All that being said, this isn’t a perfect movie. There are a few little things I could nitpick here and there, but they’re not worth mentioning. Instead, I want to talk about the one major issue I had with the film. While every step of Gawain’s journey is riveting, the quest as a whole feels more like a series of isolated events than a single coherent narrative.

The various stops Gawain makes along the way don’t have much to do with one another, and if you took them all out and just skipped straight from the beginning of his journey to his final meetup with the Green Knight, the plot wouldn’t be affected all that much. Sure, these events are important on a thematic level, as they allow Gawain to face his character flaws, but it shouldn’t be an either-or proposition. They should matter both thematically and narratively, but I never really felt like they did.

But at the end of the day, that flaw is far outweighed by the many things The Green Knight gets right. The beautiful cinematography, the compelling characters, and the great fantasy atmosphere make this one of the best movies of 2021 so far, so if you’re looking for a good time at the theater, I highly recommend that you check this one out.