Welcome back to Indie Horror spotlight, a place to highlight smaller creators who are making fantastic, unique experiences within the realm of horror.

Today I’m speaking with Magnum from Ghost Coast Games about their in-development RPG that combines a unique battle system and aesthetics from old and new favourites.

Lor Gislason: First of all, tell us a bit about Ghost Coast and the world of No Body!

Magnum: Ghost Coast is the name of my ‘studio.’ I’m just one guy but wanted everything to be done professionally. Due to the way certain things are done regarding trademarks and copyright, I didn’t want my actual name out there on publicly accessible documents.

So, I coined Ghost Coast. Which was first “Ghost To Coast,” but Ghost Coast is better and kinda sounds like Ghost To Coast anyway. So basically, before I started game dev I was (still am) an actor, writer, and director. I always write LGBT+ stories because I am gay. I don’t want to write about boring heteros, there’s enough of that already.

Due to the pandemic, I haven’t been able to work in theatre, and I lost my job. So I thought, f*ck it, I’m gonna make a game. A game that says something, that does something and has lots of queer folk in it too.

So No Body was born, a game with a full LGBT main cast and that is dark, disturbing, but also lighthearted and funny a lot of the time. It discusses many heavy topics such as suicide, anxiety, depression, abuse, etc. No Body is set in the present day. There are two worlds, which you learn very quickly: the “real” world and the “The Well.” Why you end up in The Well is a bit spoilery, but it’s a bizarre and dangerous reality. Again, I can’t say too much. Just know that our four characters, and everybody in the game, are there for a reason, and they are trying to escape. 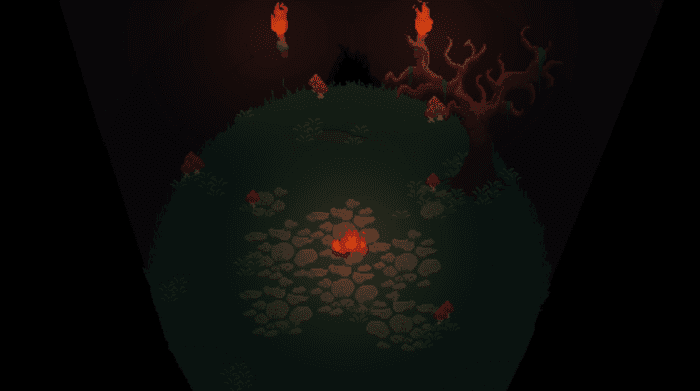 LG: Besides Undertale and Silent Hill, are there any other major inspirations for the game? Do you have any favourite horror movies or games that influenced the direction of No Body?

Magnum: I’ve never played Omori, but I keep getting told my game is similar. (I WILL play Omori when I get the chance, I promise!) As for other games, as weird as it sounds, I feel like Celeste is in there. There’s no real platforming in No Body, but Celeste’s anxiety, how it was told, and just everything about that sticks with me as a person with various issues (PTSD, depression, chronic anxiety, and ADHD. Wahoo!). Another game is Battle Chasers because of the combat. It’s quite strategic. Another would be the Souls series for their cool enemy and location designs. There’s only really one movie I think I could say influenced No Body, and that’s Midsommar purely because it was a bright and colourful horror movie in the daytime. No Body isn’t all dark and creepy—a lot of it is bright and colourful and upbeat. 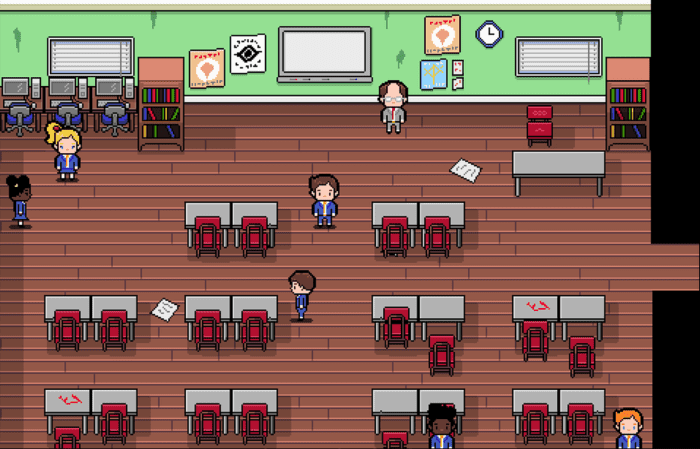 LG: Speaking of Undertale, there have been several games inspired by it released. What do you think makes No Body stand out?

Magnum: I think the art style is one way. The environmental/pixel art done by me and the character art by my artist Sam, a lot of people gel with it, and it’s the exact art style I wanted for my game. When I found Sam and he agreed to work with me I was a bit tearful [laughs]. If you ask him, I’m sure he can recant the amount of times I’ve been like “Thank you so much for working with me.”

Another aspect is the writing. Would I say my writing is better than Toby Fox’s? That’s a bold claim to make, and I don’t wanna commit social suicide by saying I’m better. We’re just different. If you’ve never experienced my writing in theatre or on radio (which you most likely haven’t), then let’s just say…I use a lot of metaphors, but am not afraid to just say it how it is. I feel the lore of No Body and the characters and their conversations are super interesting, and the way it is all set up, I feel like I could tell a thousand stories set in this universe.

I’d also throw in enemy design and the way battles are handled as a way of standing out. I’ve never experienced battles like what I’m doing in a game before. I’m not saying it doesn’t exist, I’ve just never experienced a system like this.

LG: No Body features an all openly LGBT+ main cast, which as a non-binary person I’m always excited to see. How important is inclusivity to you? Will there be any accessibility options in the game?

Magnum: As previously mentioned, I’m gay. I’m also mixed race, British + Caribbean. I only write stories/plays with gay people in them. Inclusivity in this regard is so important to me because there are no excuses for there NOT to be an all-gay main cast, even in popular media. I want gays, and I want it now. The game also has characters with disabilities. For example, Angel only has one arm. Though it’s a little hard to tell, her gold, metallic arm is actually prosthetic. This is discussed in the game. Another character has signs of Asperger’s. (Though this isn’t discussed, it is hinted at quite a bit by how she talks and responds to people.) I’m not doing this to “virtue signal” as I have been accused of (not really sure how you can virtue signal to your own community). I’m doing this because, well, why not? Besides, as you’ll discover from playing, there’s actually a reason why so many characters you meet are LGBT or disabled. No spoilers though.

Accessibility options: this is quite difficult for me as I’m just one person. There are subtitles all the way through the game, that’s sort of the default, so there’s that. I would like a colourblind option, but I need to figure out how to actually do that! 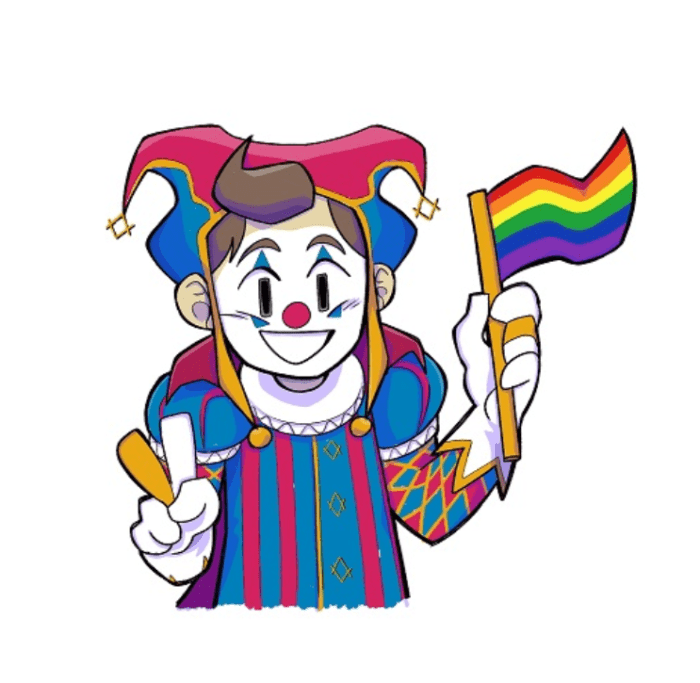 LG: Can you talk a bit about the five senses battle system?

Magnum: [Laughs] Yes. It’s really quite simple but allows a lot of flexibility and interesting scenarios for a developer.

So for example, let’s say you’re fighting something similar to Bowser. No element is hurting him, so You use [touch] and end up causing damage to yourself because Bowser is spiky. So you use [sight] and notice his belly is soft and vulnerable. Use [sight] again and you notice the ground beneath him is unstable. Oh but you have a move which causes earthquakes! Use that, Bowser ends up on his back, and you caused a “No Body!” His weakness is exposed. You can now attack him to cause damage.

Next time you fight Bowser, you can just use “earthquake” to immediately cause No Body.

This was a very brief and simple scenario, but I hope it sheds some light on how it works. It’s much easier in practice vs writing it down. 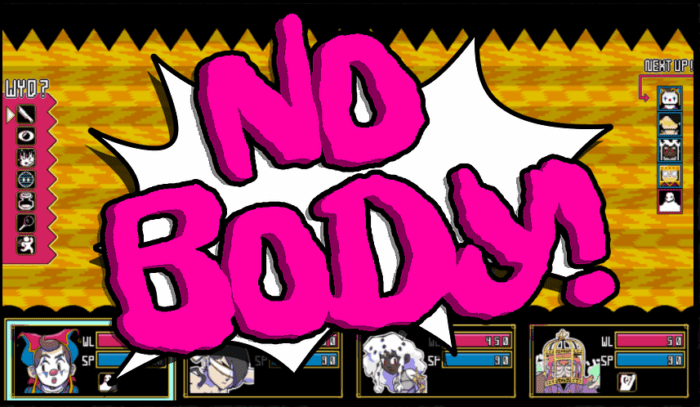 LG: Many believe the current state of horror gaming is firmly rooted in indie developers like yourself. Would you agree with this?

Magnum: Hell yeah. In fact, I think the best horror games I’ve ever played were made by indies. Bigger studios don’t want to be ‘too scary’ because of money. That’s literally why Resident Evil 8 wasn’t scary. Whereas indies don’t really have to worry about finances, ironically, and can tell whatever story they want because there are no investors. We’re the future!

LG: I know you are planning a Kickstarter for No Body in the future. Can you tell us a bit more about that and what kind of rewards to expect, etc.?

Magnum: Cheeky! Well, I plan to consult followers of the game on a couple of the rewards—at the end of the day, they’re the ones funding it, so they should have a say in what rewards are available.

One of the things I’ve been thinking about is stand-alone stories. So if you pledge at a certain level, you get these extra stories. Like what was Marked doing before you met him? The same goes for Witch and Angel. I could cram these into the game, but honestly, the game is FULL as it is, and I have no idea where I’d fit them without ruining the flow of the storytelling.

Another idea is because in-game you can play a game called GARLIC KNIGHT! I’ve been considering making the five stages of Garlic Knight separately as a Gameboy Rom, porting it onto actual Gameboy cartridges, and having those cartridges as a reward! Play Garlic Knight on your Gameboy/GBC/GBA/DS!

Another idea is to have physical versions of No Body shipped in PS1 style cases, but also a lot of people have said the game looks like a GBA game, so maybe I’ll ship them in GBA style cases. Nendoroids of the main cast is another idea too, and on the bottom will be a personalized thank you note from me.

Then there’s stuff like having your OC in the game as an NPC/quest giver, name in the credits, etc. I just need to actually decide what it is I’m gonna pick and work out what is financially viable. I don’t want to have a Kickstarter goal of £10,000 simply due to the cost of the extras. What’s important is the game, which means paying for music, art, and copyright, mainly. 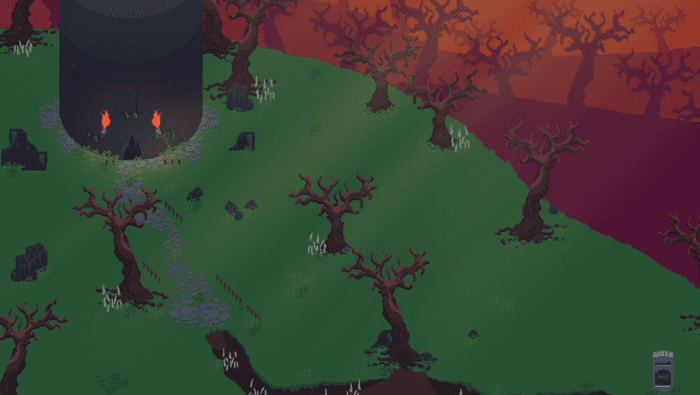 LG: Finally, tell us a fun fact about yourself!

Magnum: I’ve never seen a kitten IRL. Idk if that’s “fun,” but uh…yeah. I really want to see one though!