This article, written and read by Dean Delp, is now available on Horror Obsessive Radio.

Everyone loves a good origin story.

There’s something about knowing where it all began that helps us appreciate what we have now. The Cabinet of Dr. Caligari was the first great apotheosis of horror and cinema, making it one of the most influential films of all time.

Though there were technically earlier short films by Thomas Edison and Georges Méliès, The Cabinet of Dr. Caligari can rightly be called the first real horror movie.

At the very least, it is the first feature-length one.

Standing proudly as one of the greatest silent films of all time, it deserves, nay demands, both a review and an analysis of its implications. 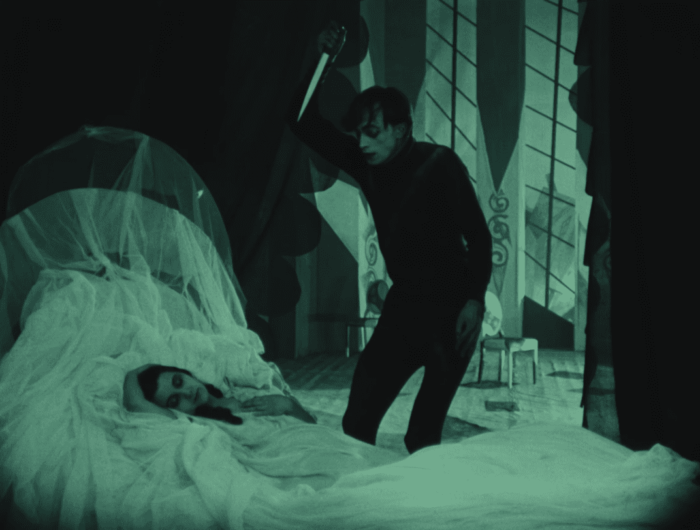 The story of The Cabinet of Dr. Caligari centers around four characters; Francis, Jane, Dr. Caligari, and Cesare.

Francis and Jane are normal citizens of their town, while Dr. Caligari is a mysterious and seemingly maniacal man who travels with a macabre performance routine. Dr. Caligari has under his control a somnambulist (sleepwalker) named Cesare, who according to the film, can only be woken by Caligari. Additionally, while in his woken state Cesare can answer questions about the past, present, and future with quasi omniscience. During one of the routines, Cesare prophesies a death and a series of murders begin taking place in town; this includes one of Francis’s friends.

The police get involved and it is discovered that Cesare is committing the murders under the control of Caligari. I can’t say more without giving spoilers, but it features several interesting plot reveals.

An infinity of Dutch angles and unearthly color filters combine to create a plethora of interesting shot compositions. While costumes and character designs are relatively standard. The place where the movie shines brightest is in its set designs.

I’m pretty picky about movies and tend toward over-criticism, but I can genuinely say in all my movie watching that I have never seen a movie with better set pieces and props than this one. The Cabinet of Dr. Caligari boasts positively immaculate murals, dazzlingly stylized buildings, and even simple props like chairs are twisted and warped, giving everything a bizarre and beautiful air.

Alongside Fritz Lang’s Metropolis, The Cabinet of Dr. Caligari is one of the crowning jewels of German Expressionism. In short, the movie is an absolute masterpiece by any standard, and entirely unprecedented in its time. 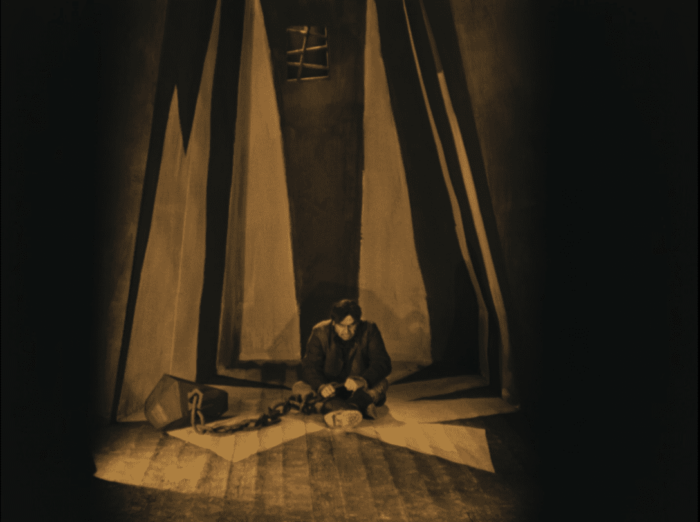 The Cabinet of Dr. Caligari is the origin of visual horror media as we know it. Almost every kind of horror trait or trope you can think of is featured in this movie. Certain scenes and imagery are flat-out stolen and repeated by later films.

If you’d like to see which ones, you can check out a review of the movie done for its 100th anniversary by the legendary James Rolfe.

Dr. Caligari’s monster equivalent Cesare demonstrates the infamous “monster carry” as it is called a full decade before any other film, so far as I’m aware. The scary carnival or circus is highly prevalent in the first half of the movie as well.

Spatially distorted sets and stages have been used in thousands of horror films ranging from classics like Universal’s Frankenstein to literally every Tim Burton movie in existence. Horror leans heavily on distorting reality and the tradition of physically warping a movie’s environment comes directly from The Cabinet of Dr. Caligari.

In a plot sense, the movie was highly influential and experimental for using an unreliable narrator and flashbacks. The Cabinet of Dr. Caligari is so bold as to even use flashbacks inside of flashbacks before returning to the present. It contains multiple plot twists playing at the themes of insanity which were highly original for the time.

Beyond that, the movie itself exists inside a frame narrative, perhaps the very first in cinema.

There are also the political implications of the movie. The Cabinet of Dr. Caligari is filled with analogy and even symbolism depicting the German psyche between world wars. After all, this movie came out in 1920, practically moments after World War I had ended.

The movie’s creators were known to be pacifists, and the widely accepted interpretation of the film is one of irrational authority. Caligari uses his powers to brainwash and control Cesare, making him do all sorts of monstrous deeds he would never commit otherwise. It is an analogy to a population controlled by totalitarianism and propaganda. It would prove even more prophetic after World War II than it already was after World War I.

Critical reception in both Germany and the United States was dramatically positive, with several critics calling it the first piece of artwork in cinema. Very high praise. To be honest, though, I may have to agree with them. The Cabinet of Dr. Caligari. is not only one of the most important movies ever made, but it is also one of the most aesthetically beautiful as well. 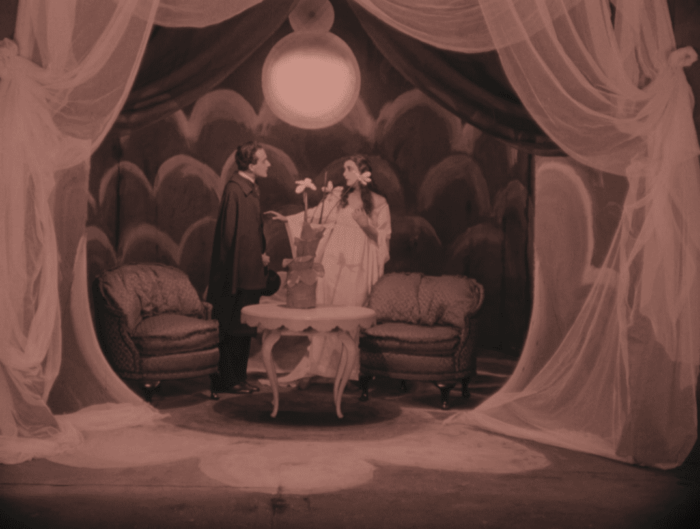 Though by today’s standards the movie isn’t even remotely frightening, it is still an absolute pleasure to behold. At only an hour and 15 minutes, it is entirely worth it.

Now, more than ever, you should see this movie. Digital remasters have made the film even more dazzling and despite being a century-old looks crystal clear.

There are numerous free versions available because the film is clearly in the public domain, but I would honestly spend the few dollars it would take to rent a high-definition version of it from Youtube, Google Play, Amazon, etc.

The truly interesting thing is that depending on which version of the movie you watch, the entire soundtrack, and even the color filters can be different. Occasionally, even the runtime is different, but most versions range between 70 and 80 minutes.

My personal recommendation would be to watch it as late at night as possible, and preferably by yourself. Turn all the lights out, let yourself relax, and step inside The Cabinet of Dr. Caligari.