Deadhouse Dark is an Australian anthology series made up of six horror shorts, loosely connected by a box that features in one of the episodes. There is an equally loose thematic connection in so-called “modern trends”, but that’s not to say these are reactionary: Deadhouse Dark is not trying to hold us back but rather warn us to move forward with our eyes wide open and be wary of what new ways might teach us about ourselves.

Enzo Tedeschi (The Tunnel) has brought together a group of filmmakers, and each of them—including Tedeschi—has written and directed a short film. They all share producers (Tedeschi and Rachele Wiggins), composer (Caitlin Yeo), and cinematographer (Chris Bland), as well as high production quality in general. The cast is different for each, as are the tone and style. Thus, Deadhouse Dark is also a showcase for Tedeschi’s production company, Deadhouse Films.

Overall, Deadhouse Dark is really rather good. Tense, intriguing, skin-crawling, or just plain uneasy: each of these shorts presents a different kind of horror, but they are all gripping in one way or another, either because you can feel for the characters or because you can’t bear the thought of what comes next. Considering that each of these episodes is roughly fifteen minutes long, this consistency of effectiveness is impressive. 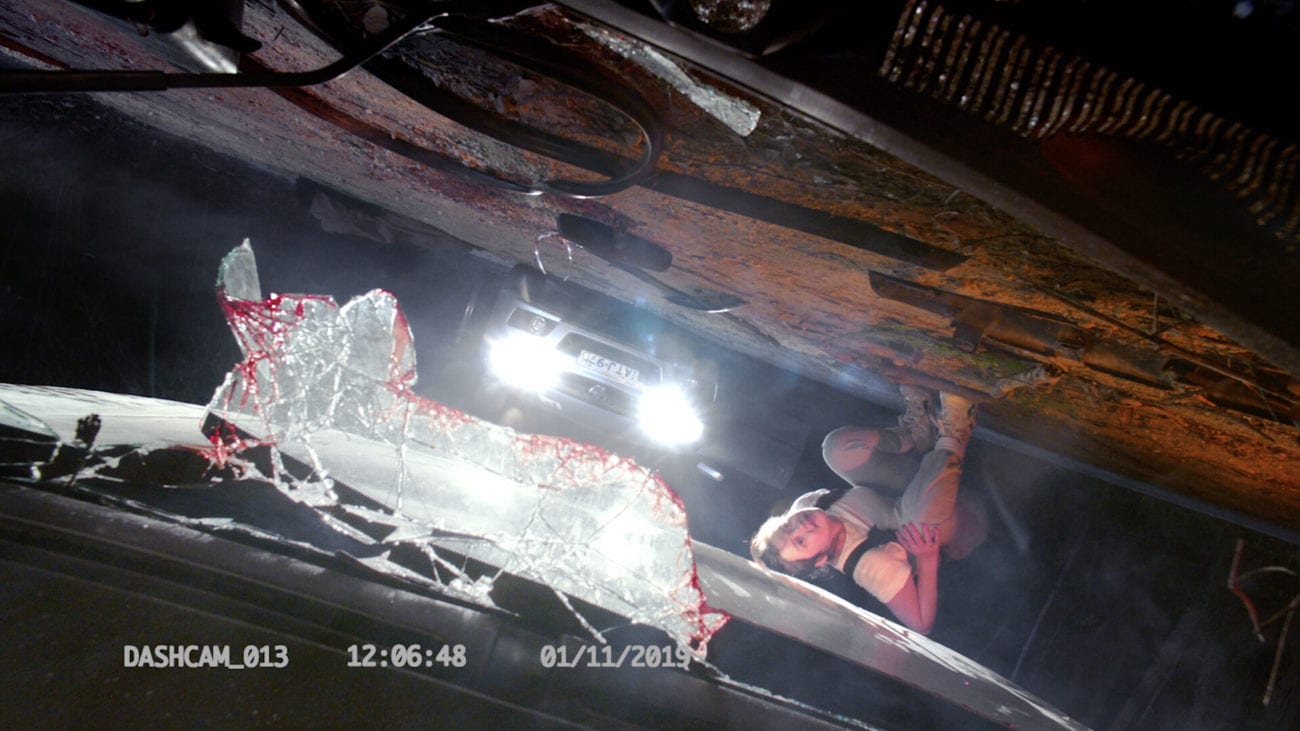 Episode 1 “DASHCAM_013_20191031.MP4”, written and directed by Rosie Lourde (Romance On The Menu) follows two young women on their way home from a Halloween party. What occurs after Marti (Naomi Sequeira) and Linda (Eliza Nicholls) happen upon a car accident may seem familiar and perhaps a little predictable, but the found-footage device using an in-car dash-cam brings the viewer right into their experience. Dark country roads, domestic tension, and painful inevitability combine to make a horribly effective little nightmare.

The pressure on teenagers to do better—from themselves, each other, or social media—escalates in Episode 2 “No Pain No Gain”, written and directed by Megan Riakos (Crushed). Young athlete Tilda (Gemma Bird Matheson) is desperate to win and finds herself drawn into her dream coach’s online programme of toughening up. Matheson impressed me with the dilemma and anguish visible on her face as each step in the programme seems to get more demanding. This Deadhouse Dark short gained an even more chilling hue when I discovered it was inspired by a real-life social media challenge from just a few years ago called “Blue Whale”, and it was followed by support information for young people considering suicide. This short explores things we do and the influences we are prepared to give in to when we don’t feel good enough.

I’m sure I’ve seen films about vloggers naively falling foul of misadventure, but Episode 3 “The Staircase”, written and directed by Denai Gracie (Battle Ground), takes some contemporary yet familiar tropes and applies them with style. Brody (Ryan Morgan) is in search of “insta-fame” as much as local creepy mysteries, and when he and his little team get diverted from a story by a doorway with a “condemned” sign, they encounter mysteries they can barely describe, let alone report. The acting is not quite so great in this one (and the lesson about fame a little trite), but the special effects and air of real dread make up for that just fine.

Most of the episodes/short films feature cast who are relatively inexperienced, but Episode 4 “A Tangled Web We Weave” (written and directed by series creator Enzo Tedeschi) stars Nicholas Hope, who I admired hugely in his film debut Bad Boy Bubby. He plays David, who meets Ellen (Barbara Bingham, another established actor) via an online dating app (it’s refreshing to see people even older than me meeting that way) but struggles with the embarrassment of a rat in his house. This one is somewhat more surreal and colourful than the others so far, though still nasty underneath, reflecting a theme of appearances that deceive. 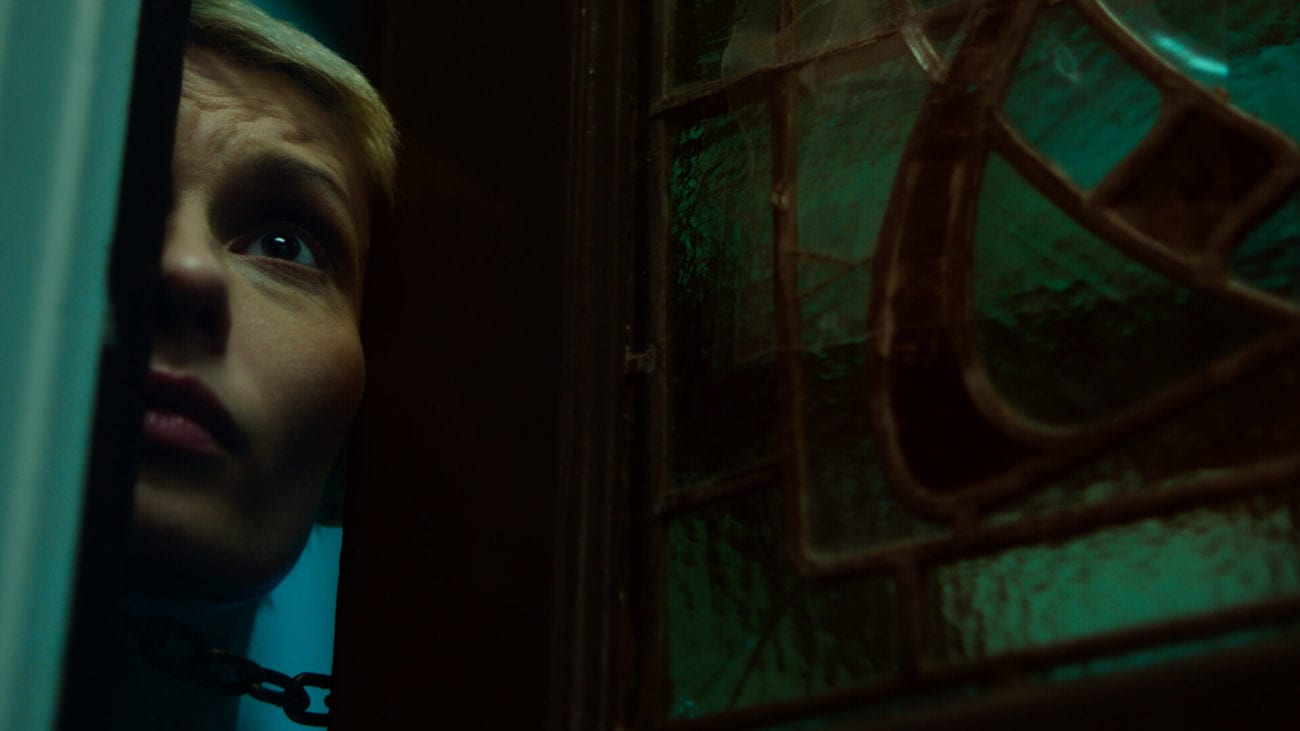 Then comes Episode 5 “Mystery Box”, written and directed by Rachele Wiggins (Slice of Life), which provides a link between the stories. Sophie (Lauren Orrell) can’t bear to be on her own in the big house for long, but at least that’s easier for her than going outside. She steps out briefly to retrieve an unlabelled parcel that appears, and the isolation-agoraphobia-mix steadily becomes more oppressive. The story—as far as it goes—is more weird than supernatural, and it has a mood blending patient, sad and determined. Rather a contrived pay-off, but beautiful to watch.

Finally, Episode 6 “My Empire Of Dirt”, written and directed by Joshua Long (“Post Mortem Mary” segment of A Night of Horror: Nightmare Radio). Grace (Anni Finsterer) is dying from an unspecified condition, and Demi (Akosia Sabet), a dedicated young “death midwife”, spends time with her to bring peace and clarity to the process. The contrast between the two women, agony and harmony, was almost too gut-wrenching for me to bear: I’ve not seen anything which made me feel so physically sad since Relic. The subject of mortality and the use of Grace’s home (through content rather than structure) to portray the inescapable nature of one’s condition also brought me back to Relic. This was the short film I respected the most, due to the creativity of its presentation, the performances and the sheer heartache it generated; but it was also the most difficult to watch, and I couldn’t give it a second viewing for the sake of the article, as I did with the others.

So there you have it: Deadhouse Dark is an anthology that you can dip into in your coffee break, or watch in its entirety like a film. Unlike many anthologies, there is little humour here (fine by me: I like my horror to be serious and thought-provoking as a rule), though that doesn’t restrict its breadth of variety. The only real issue I had with it was what felt like an odd order to the episodes: finishing with “My Empire of Dirt” gave the show a real downer of an ending, and “Mystery Box” could have formed a better conclusion. But that’s all. It was certainly engaging enough that I’ll be looking out for more from Deadhouse Films.