Trigger warning: this article contains multiple detailed references to the act of suicide.

If you are having suicidal thoughts or know someone who does, please seek help. You are not alone. Talk to someone who you can trust, or call the National Suicide Prevention Lifeline 1-800-273-8255.

For years I’ve been contemplating different exotic destinations to make a trip to, and I hope I will when it’s safe to do so. Nearing down to a final decision, today, I’ve decided on Japan. I’ve always admired their fashion, architecture, films, and of course delicious food. Nonetheless, I’m also a bit intrigued by their horror, and I’m not speaking of film-wise such as Ju-On: The Grudge either, though it is one of my favorite Japanese horror films. Rather, I mean a sense of an expression of horror, “dark history.”

Did you know that Japan has the sixth-highest suicide rate in the world and the second-worst among eight major nations? Sources say that more than 70 suicides were committed in a day, which surpassed 25,000 in the year 2020. It is reported that the majority of those acts were perpetrated by men. As sad and horrific it sounds, back in the day, suicide in Japan was prominent and, shockingly to me, traditional. Seppuku was a samurai’s ritual suicide thought to be honorable—the act typically involves stabbing oneself in the belly with a short sword, slicing open the stomach, and then turning the blade upwards to ensure a fatal wound. However, in this day and time, the act is rarely committed since the last incident was documented in 1970 by the well-known Japanese novelist, Mishima Yukio.  Recently, a large number of suicide victims preferred to spend their last moments at what is known to be the most popular suicide destination in the world, the Aokigahara Forest.

A few days ago while having a conversation with a friend that was aware of this topic, she decided to gift me a 20-minute documentary from 2010 about the forest that is available to watch on Vice. In the documentary, geologist Azusa Hayano takes a trip to the Aokigahara Forest where he talks about the history behind it and what he does as an environmentalist to help guide as many individuals as possible not to attempt to commit suicide there. He narrates that in the year 864, the tallest Mountain in Japan called Mt. Fuji, an active volcano approximately 100 km southwest of Tokyo, erupted. A forest that supposedly grew over the dried lava was given the name Jukai, “The sea of trees.” Some say that this name was given because the forest stayed green all year long.

When you arrive at the forest, there are abandoned cars that have been at the site for months, Hayano explains while speculating that the cars left behind were owned by victims who are either lost or have committed suicide there. Before entering the forest, a brown wooden sign displays a warning about suicide written in Japanese that reads, “Your life is a precious gift from your parents. Please think about your parents, siblings, and children. Don’t keep it to yourself. Talk about your troubles. Contact suicide prevention association.” 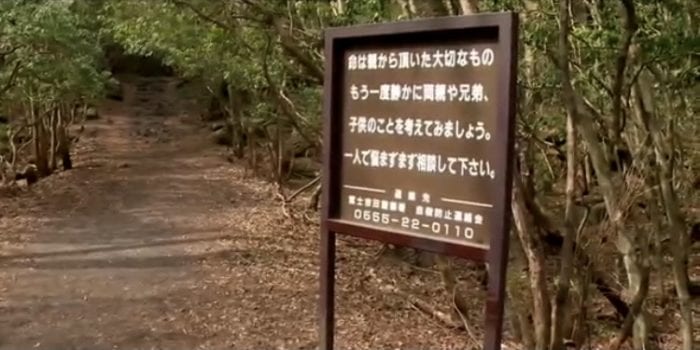 “In some cases, poor families would leave their elders there to die, along with parents convincing their children that the forest is scary and are told not to go near there,” Hayano added. In addition to that, something which is not mentioned in the documentary is that paranormal investigators even say that the site is haunted. They believe that the Yurei—angry ghosts who suffered a violent and unnatural death—are still roaming through the forest, as well as demons. Furthermore, rumor has it that, due to the vast amount of bodies discovered there, the Yakuza, a mafia of gangsters, pay the homeless to sneak into the forest and rob corpses of their belongings.
The destination is open to the public, Hayano claims, but warns that visitors are not allowed past a certain trailhead near another warning sign written in Japanese that, translated literally, reads, “Not to enter because you can easily get lost.” He further explains that most victims who are indecisive about committing suicide wrap tape along the way into the forest so they can seek a way out.

You will always find something at the end of the tape, either a dead body or tracing that an individual was there at the time. 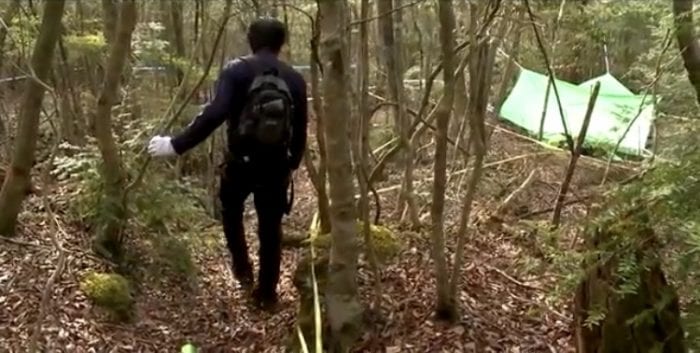 Many victims erect tents in the middle of the forest while deciding whether or not they want to kill themselves. Some go to the forest and kill themselves immediately, often hanging themselves by the neck—but hanging isn’t the only preferred suicide option that the victims choose. Some either die of starvation or overdose on a bunch of prescription pills. Others nail objects on trees such as suicide notes or cursed stuffed animals as a symbol of the pain they experienced that triggered them to go there. In the previous 20 or so years leading up to the documentary’s production, Hayano estimated that he discovered more than 100 bodies at the site, as well as the same amount of victims being reported missing during that period. To this day, visitors may even find personal items that are still left behind at the site by the victims—maps, mirrors, and even ropes that were used at the time of their death wrapped around in a loose knot on the tree branches. 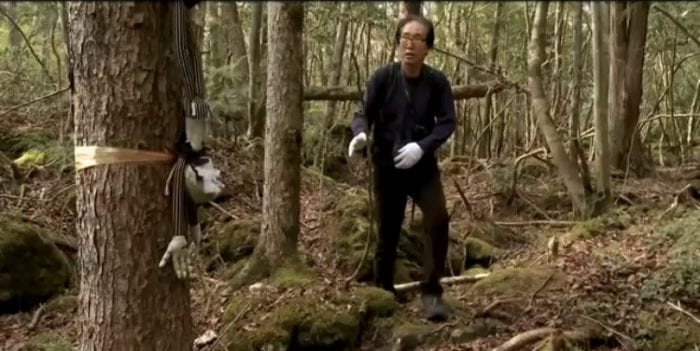 Towards the end of the documentary, Hayano expresses his sympathy towards a suicide victim, turned skeleton, that he’d discovered during the interview, “It makes me feel sorry for them seeing humans decomposed and rotten. Before it rots, parasites will hatch and the flesh will disintegrate.”

Following his expressions of sympathy, he reminisces about a conversation that he had with an individual who survived a near-death suicide attempt and about encouraging him not to do it again. After the victim explained how young he was at the time of the incident—and how severe the pain was from the attempted hanging that left a permanent mark around his neck—he states that he decided to take Hayano’s advice to never attempt again.

I think the way we live in a society these days has become more complicated. Face-to-face communication used to be vital, but now we can live our lives being online all day. However, the truth of the matter is, we still need to see each other’s faces, read their expressions, hear their voices, so that we can fully understand their emotions to co-exist.

I mean, do we not all agree? As for me, I could not have stressed this need for human contact enough. I’ve once had negative thoughts that led me to believe that the only way to make it all go away is to just end it all, but after realizing that those thoughts were getting the best of me and were not who I was as a person, I decided to let go and let the universe take over because I had no control over how my life should turn out to be, which was a wake-up call for me.

When we think about the past that no longer serves us and the future that we can’t control, we sabotage what is important, and that is being in the present moment and truly understanding that we can learn from our mistakes and change them for the better to grow and expand. So, love yourself. Spend time with yourself. Get to know you. Think of what makes you happy. Treat yourself to a hot cup of coffee or better yet, beautiful flowers. Be grateful that you are a human being in this lifetime who has a chance to make a difference from within yourself and to those around you. You matter to the world. Someone loves and cares about you deeply, which is what makes life worth living.

Interested in learning more about the Aokigahara Forest? Of course, there are a vast amount of documentaries about it around on YouTube, etc., but from what I’ve discovered, there are also films, books, and even music that you can also access, too. As a song recommendation for this article, please give a listen to “Jukai,” a song by one of my favorite artists, Jhené Aiko:

I use affiliate links