The Wolf of Snow Hollow is a werewolf horror-comedy that came out in limited theaters and on VOD for purchase on October 9, and it became available for VOD rental on October 27. It was directed by Jim Cummings, and it stars Jim Cummings, Riki Lindhome, Chloe East, and Robert Forster.

It’s about a small town that experiences a string of unexplained killings, and with every new body that shows up, people become more and more convinced that the killer is a werewolf. However, one cop working the case, Officer John Marshall (Jim Cummings), can’t accept that theory. He insists that the perpetrator is human and that the police will find him, but the murders keep on coming with no suspect in sight.

Whenever I see that a promising new werewolf movie is on its way, I always get excited. For some reason, we don’t get too many entries in this subgenre anymore, so it’s always a real delight when a new one comes out. I had high hopes going into this one, and I was ready to sink my teeth into an early Halloween treat.

Unfortunately, this movie was a huge letdown. To begin with, the humor fell completely flat for me. I literally didn’t laugh at a single joke the entire time. In fact, I didn’t even realize this was a comedy until after the film was over and I went to its Wikipedia page to get some details for this review. I thought the characters were just weird and quirky, but now I know that they were trying to be funny. It clearly didn’t work.

And speaking of the characters, they were probably the most disappointing element of The Wolf of Snow Hollow. The movie is rather light on the horror, and the plot is pretty simple, so it stands or falls almost entirely on the strength of its characters. Unfortunately, they were very underwhelming.

For the most part, they were just flat and boring, with one exception. Officer Marshall gets a real character arc, but I found him almost completely unlikeable. He’s kind of a jerk, and not in the “you love to hate him” way. He’s a jerk in the “you just hate him because he’s a jerk” way. That being said, I do have to give Jim Cummings, the actor who played him, credit for his performance. Even though I didn’t like the character, he was played quite well. 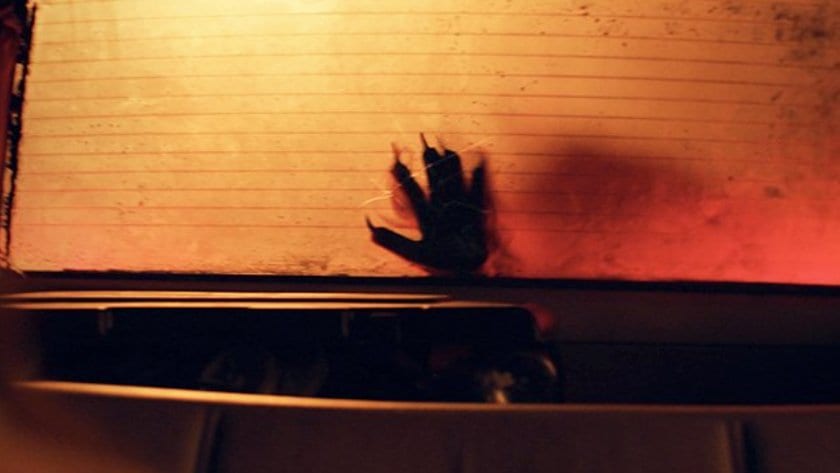 Finally, we have the horror elements. Like I said, this movie is light on the horror, so the werewolf doesn’t show up all that much, and when it does come around, the movie doesn’t give us anything we haven’t seen a million times before. In particular, the creature design doesn’t look much different from every other werewolf movie ever made, and the kills are all standard monster movie fare. In themselves, those generic elements aren’t necessarily bad, but they’re not enough to elevate an otherwise lackluster film.

Beyond that, there’s an even bigger problem with this werewolf: it lacks the metaphorical punch that this kind of monster so often carries. Throughout horror history, werewolves have always served as great metaphors for universal human experiences, like the struggle between good and evil that we all have raging inside of us or the ways people change as they go through various stages in life, and that’s often what makes their stories so interesting.

But the lycanthrope in The Wolf of Snow Hollow is different. Since you don’t know who it is until the very end, it doesn’t carry any deeper, metaphorical meaning. In fact, you could’ve replaced it with any other kind of monster, and the movie would’ve been exactly the same. The fact that it’s a werewolf and not, say, a vampire is entirely inconsequential. All that matters is that it’s a monster that Officer Marshall doesn’t believe in.

Now, that’s not to say that every werewolf movie needs to have a deep meaning or that the monster can never be interchangeable with other creatures. For example, I’m a big fan of Dog Soldiers, and that’s a straight-up action movie with monsters that pretty much just happen to be werewolves. It works mainly because everything else about it is really good, so the absence of a metaphorical meaning or any werewolf-specific plot points doesn’t matter. The Wolf of Snow Hollow, on the other hand, doesn’t have much else going for it, so those deficiencies are a huge mark against it.

The only interesting thing this movie does with its monster comes at the very end. I don’t want to spoil it, so I’ll just say this: it does something that is unique but that will also be very divisive with viewers. It’s a huge change from what we normally expect in a werewolf movie, and while novelties can often be refreshing, a lot of people aren’t going to like this specific twist. I personally wasn’t a fan of it, so for me, it simply added to my frustration with the film.

All in all, I’m sorry to say that I didn’t like much about The Wolf of Snow Hollow. The comedy was unfunny, the horror was barely even there, and the characters were a real chore to watch. The only bright spots were Jim Cummings’s performance and a few decent werewolf scenes, but they weren’t nearly enough to save an otherwise bad movie. So if you’re hankering for a good cinematic lycanthrope, I’d recommend that you give this one a pass and just revisit the classics like The Wolf Man and An American Werewolf in London instead.