I played the Resident Evil 3 Remake earlier this year and wrote two glowing reviews for it here and here. I got the Platinum trophy on the PS4 and to this day have the final unlockable concept art image set as my PS4 wallpaper. And yet…now I know why I saw so many polarizing reviews for the 3make after mine published. It may have been an entertaining game but it was a pitiable remake.

I didn’t know that at the time. I opened my initial review of it mentioning I went into the game with no baggage, or expectations of what the game should (or shouldn’t) be. I barely played Nemesis when it came out in 1999. I think I rented it, got bored, and didn’t play it again until it was available on the PSN Store for the PS3, where it sat in my library, until now.

I finally got around the playing Resident Evil 3: Nemesis and now I understand why the remake was so disliked by people that played the original. Aside from a few visual references, and relatively close story beats, the games are very different. So I get it now, while I stand by my reviews of RE3 Remake, I think this farewell to the original Playstation hardware is the better game, tank controls and all.

Resident Evil 3 is a sequel in name only, and is—in fact—a side-quel. It takes place before, during, and after Resident Evil 2. Never is this more apparent than the early scene where Jill arrives at the RPD.

At this point early on, Jill has already run into Brad Vickers, the pilot from the first game, still very much alive at this point. See, I’ve been saying week after week he’s alive in this game and indeed he is! Briefly. He’s quickly dispatched at the entrance to the RPD when Nemesis makes his grand entrance and impales Brad. This explains why zombie Brad is sometimes wandering around the RPD in RE2.

Jill’s jaunt through the reused RE2 police station is brief, but it’s a nice early break from all the mayhem. RE3 allows you more freedom to wander the streets of Raccoon City. Never has an RE game felt so open to exploration. As I began my replay I remembered this being the thing that actually turned me off the game back in 1999. I have a tendency to fret over unexplored avenues in games, and I had a constant lingering feeling I was always missing something, or expending too much ammo or health items, potentially leaving me ill equipped to survive the game later on. This proves foolish, since ammo is in ample supply in this game, as the enemies come at you in large quantities. This is thanks to the game scaling back the character models, meaning more zombies (albeit ones consisting of fewer polygons) can appear at once.

The RPD section actually didn’t help my incomplete feelings, as you only explore a part of it before moving on. While this game was done in a short period of time, and reusing the assets and key location of RE2 was done as a time saver, it was still nice to interact with things that you couldn’t in RE2 (the STARS office for example allows you to inspect things you previously couldn’t).

I don’t quite know how exactly RE2 and RE3 overlap, and I could probably do an entire article on continuity errors between the two games, but since there are alternate scenarios in both games, I’ll save that certain brand of nitpickiness for those Gaming Sins YouTubers to ding.

Jill is caught off guard by the zombie outbreak (although I’m not exactly sure how sh*t went so sideways so quickly) so the fact she ends up not dressed for the occasion kinda makes sense. Nevertheless, her tube top and miniskirt outfit would probably get a few side-eyes from the internet finger-waggers of today. In the remake, she of course is dressed sensibly. Also, since she’s the generic and stereotypical 2020 “badass female protagonist” she’s gruff and says “F*ck!” a lot in the remake, because Big Guns and Cursing = Empowerment. 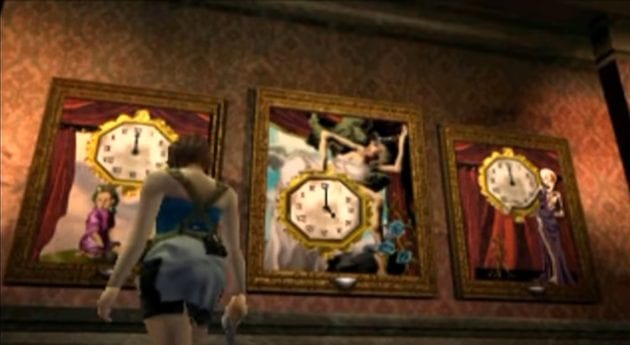 1999 Jill was an actual badass, she just happened to be dressed in a way that makes today’s online activists—with a dragon in need of slaying—sharpen their critical swords.

Admittedly, Carlos Oliveira, who in the Remake is a blandly generic good guy character, is a bit of a creeping perv in this game. Not Chief Irons (from RE2) levels of skeeve, but definitely on par with Luis from RE4. At least he doesn’t comment on Jill’s tube top being equipped with “ballistics” the way Luis did to Ashley in Resident Evil 4.

Familiar Gameplay with Some New Tweaks

Resident Evil 3 doesn’t do a lot to stray from the RE formula. However, there were a few new things added to this game that made it stand out.

The Ammunition Creation System is introduced in this game, and sees Jill using the Reloading Tool and various types of gun powder found in the game to create different types of ammo. There are 3 main types of gun powder (A, B, and C) and you can make 13 different types of gun powder by mixing them together. In simpler terms you can think of it like herb mixtures. Gun powder A used in the Reloading Tool will get you hand gun bullets, but A + C will get you grenade flame rounds, while mixing three C’s together will make magnum bullets. It’s a nice way to customize what bullets you want to make, instead of being at the mercy of what you find laying around.

Some portions of the game will offer you decisions (called “live choices”) which will alter how that part of the story plays out. It was put there to give the relatively short game some replay value. The remake took those elements out because they wanted to create a more linear, and longer, gaming experience. They certainly made it linear, but the RE3 Remake is far too short for that artistic choice to be worthy of defending.

Nemesis overall tried to innovate on a small scale level. Resident Evil games are trope-heavy affairs. The same things happen constantly in the series, and RE3 has got tropes, make no mistake about it, but they aren’t as plentiful as usual. Much like Mr. X in Resident Evil 2‘s B scenarios, Nemesis has a habit of Kool Aid Man-ing himself through walls and windows. There’s a helicopter that crashes, and one that doesn’t. And of course there are rocket launchers, only this time Nemesis has one too. But other than that, it’s a relatively original affair.

This game was never meant to be a mainline title. It was supposed to be an action-oriented spin off featuring a new character attempting to flee the city. The original Resident Evil 3 was to be set on a luxury cruise liner, and was to feature HUNK, who first appeared in RE2 in a secret mini game called The 4th Survivor. HUNK, who never speaks, would’ve made for quite the bland protagonist. Luckily, that game was not going to be ready in time, so Capcom decided to retro-fit their spin off game into a mainline title, replacing the new character, and placing Jill Valentine in the lead role.

Capcom was also working on Resident Evil – Code: Veronica at this time. Perhaps the dev teams spread themselves a little too thin during this part of the franchise’s evolution. Time constraints, diluted resources, and artistic compromises lead to this being a less than stellar outing. Sure, there was some fun post game content, including The Mercenaries: Operation Mad Jackal, which incentivized the players to complete it in order to unlock some extra content and outfits you could use in the main game. Overall, RE3 is a good game. It’s short and sweet, not terribly challenging, and just different enough from the previous two to keep players engaged.

You Are Now Leaving Raccoon City

Before we close the book on the PS1 era of mainline Resident Evil games, we need to say goodbye to the town (or sprawling, major American city, if you’re in the version from Remake) of Raccoon City.

When the final battle is won, and you make your escape, you fly off in a helicopter just as Raccoon City gets nuked off the map. Is Umbrella gone for good? Will Jill find peace and redemption? And who is piloting this chopper? That burly frame, that ginger hair! It’s Barry from Resident Evil! Good thing ol’ Barry Burton showed up when he did, she was almost a flash-cooked Jill sandwich.