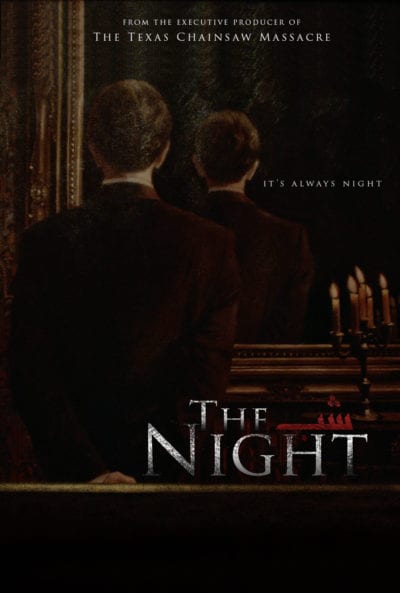 Welcome to the Hotel California. You can check out any time you like, but you can never leave. Iranian-American director Kourosh Ahari’s debut feature The Night is a supernatural fright-fest—one that also delivers a superb and timely tale of an immigrant family living in America. It is currently featured at the inaugural Nightstream Film Festival and instantly became one of my favorites of the year. While being spoken mostly in Farsi, it actually takes place in Los Angeles—a very welcoming approach that honors where this film is coming from. It’s an immensely human story that anyone, Persian or American, can relate to in some way. Thusly bridging the gap between the two increasingly tense cultures.

An exhausted married couple, Babak (Shahab Hosseini, a Best Actor winner at Cannes for The Salesman) and Neda Naderi (Niousha Jafarian) seem to have trouble acclimating to life in America. Their obviously strained relationship is put on display right away as they bicker throughout the first act. After a night out with friends, a very under the influence Babak drives his wife and baby home. He stubbornly does so because Neda’s license is suspended.

On their drive home, they find themselves good and lost with their navigation app no longer functioning. To make matters even worse, Babak suddenly appears to run over a black cat. A universal superstition no-no. In fact, a quick google search can tell you that in Iran, killing a black cat at night will bring death upon you. However, my suggestion would be to simply never kill a black cat at any time of day. After scoping out the situation, it doesn’t look like he killed the cat at all. Actually, he severely pissed this thing off. Another universal no-no, by my count.

They admit defeat, deciding to seek refuge in the nearby Hotel Normandie. A haunted hotel so creepy that it MUST share some sort of spiritual connection to the Overlook from Kubrick’s legendary film The Shining. Actually, The Night evokes the pain and agony that stems from denial stronger than any film that has tried to achieve it since. Unbeknownst to Babak and Neda, the horror hotel they’ve checked themselves into will not be letting them leave or sleep peacefully through the night. At least not until they communicate whatever dark secret they are hiding from each other.

The cast of seemingly ordinary ghosts within the hotel slowly introduce themselves in memorable and hair-raising ways. George Maguire in particular had many show-stealing scenes, freaking us all out as the world’s creepiest hotel receptionist. Seriously, that guy was an immediate red flag. There are a lot of things wrong in that hotel, but he has to be number one. They all have their own brand of strange, though. Every time one of these apparitions manifests themselves, they appear to just be normal people in the hotel or some sort of Neda/Babak doppelganger. However, something seems peculiar about these people.

Ahari’s ability to make the ordinary appear anxiety-inducing was unmatched at this festival. By doing so, these ghastly beings agonize this foreign family and us as well. Where they see an agitated police officer dismissing their cries for help, we see a potential supernatural entity with a yet unknown motive. An obnoxiously loud spirit standing outside their door in the hallway? Or possibly a xenophobic hotel guest who didn’t take too kindly to a family of color staying nearby. A potent method to get an American audience to empathize with the plight of this Iranian couple.

Either way, everyone involved should be rightfully scared. Rather than relying solely on silly jump scares and over-the-top gore, director Kourosh Ahari uses effective camera-framing techniques and utterly spine-chilling sounds to petrify his audience. Keeping whatever horrors watching Babak’s every move just ever so slightly off-screen. Only giving just enough to let our imaginations run wild. As a result, this style effectively reclaims the definition of xenophobia. Restoring it to its original meaning as a fear of the unknown, rather than the much more specific usage today in a post 9/11 world.

In the Q&A afterward, Ahari spoke of the importance of making a film that can be shown both in America and Iran. He succeeded in this effort to bring together two societies that have an otherwise strained relationship. This is truly a ground-breaking film for the horror genre in Iranian cinema. Not to mention one that will be sure to please fans all over the world. There is a little something for everyone to be found within this chilling story. The more inquisitive horror fan (like me) will take great pleasure in finding the underlying themes hidden within the spooky Hotel Normandie. While fans of a classic ghost story will be keen on experiencing the many scares to be had during this long dark night.

Despite the fact that the puzzle within The Night can be quickly solved. It does not dismiss the fact that it has something incredibly important to say. It isn’t ghosts or any other supernatural being keeping Babak and Neda up at night. It’s racism in America—conveyed through ghostly harassment and the gaze of unwanted eyes. The horrible secrets they hide? Perhaps it’s their own refusal to admit to each other that the American dream is not what they were promised. Explored in classic media such as The Great Gatsby, the idea of the American dream is deeply rooted in hedonism. Selfish overindulgence eventually leading to self-destruction. Just as it was the case in The Shining, our own self-serving denial and refusal to retrace the steps of our past will eventually be our own undoing.

If you’re still trying to find a film to watch at Nightstream this Halloween season, an on-demand library is still available until October 14th. Badges and tickets are readily available and many more amazing films are there to enjoy. Do not pass up an opportunity to support incredible films like this one!