I’ve written before about the best works of bizarro author Jeremy Robert Johnson. Almost everything he touches turns to gold in one way or another thanks to his ability to inject real humanity into stories that are fundamentally over the top and strange. He was mostly known for his outstanding short stories and novellas until 2015’s Skullcrack City came along and showed the world that, yes, he’s capable of turning out a long-form story as well. Since then, he published In the River, a brief novella that combines elements of fantasy and survival horror, and Entropy in Bloom, which is sort of a greatest hits collection of some of his best short stories.

It’s been a few years since the world has seen anything by him, but it was worth the wait. His new full-length novel, The Loop, delivers on everything that makes him a great writer. It has a strange horror sci-fi concept, explores the darkest parts of the human mind, and features powerful, take-no-prisoners storytelling that transcends its genre. 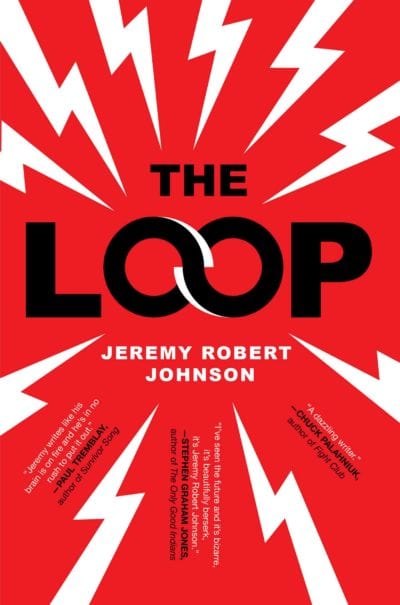 Lots of things that are strange

The marketing for this novel advertises it as Stranger Things meets World War Z. I can’t speak very much on the latter because I’ve only seen the movie adaptation once, but honestly, the comparison to Netflix’s hit show is very surface level. I was worried at first that he would be chasing trends with this after hearing that comparison, but where all the characters in Stranger Things are shockingly well adjusted and whimsical, in The Loop, the cast is all struggling with their own situations and dark pasts.

The protagonist, Lucy, is an adopted child from Peru whose guardians mean well. They provide her with shelter, food, a place to stay, and generally try to be as involved with her life as they can, but they also respect the fact that she has past trauma that makes it difficult for her to connect with others. As someone with brown skin in a very rural town, she is an outsider, and her best friend Bucket is the only outlet she has to cope with the feeling of being othered that she has.

It’s a much more grounded take on the teen horror novel, and there’s a huge focus on the damaged parts of the whole cast. Even the characters who go on to be antagonists, such as a highly privileged boy that goes missing early on, have elements of being forced into bad situations by the societal rules of the town (to say much more would be to give away some late-game revelations).

Meanwhile, the plot itself concerns an outbreak of violence in the characters’ hometown. After a brief, almost surreal opening that sees Lucy witness a student beat a teacher to death with a textbook and gouge out another student’s eye, she decides to go to a party despite the social anxiety she has from the traumatic incident. Things quickly go awry when teenagers from the nice part of town start showing up with pale blue eyes and a taste for blood that goes to extreme lengths.

A real asset of JRJ’s work is his outlandish ideas that he executes to their fullest extent. I’ll admit I was a bit skeptical when I heard the premise since it sounds like it could be any number of zombie or zombie-adjacent stories, but in true him fashion, Johnson employs some twists later on that are classic him, offering an exploration of human consciousness and how frail that really is, as well as other themes like parasites. Suffice it to say that this is in line with his other work, despite how it initially comes across as another teen zombie story.

Humanity in the dark

The other big misstep when marketing this book as Stranger Things adjacent (aside from the fact that it takes place in 2019 and has no obnoxious ’80s references) is that this book is positively brutal. Johnson is no stranger when it comes to gore, with most of his short stories using violence in different ways. As mentioned above, the book opens with a detailed description of a teacher’s head being bashed in by a textbook, and things only get gorier from there once the second act starts. It’s not for the faint of heart, particularly later on when things get into full-on Cronenberg territory with insane body horror taking center stage.

That’s not to say that the book is gratuitous. The violence not only serves to heighten the threat, but it also turns the book into an exploration of humanity’s violent tendencies. Lucy has to commit some pretty heinous acts in order to survive, and the most disturbing part is that some exceptionally damaged part of her mind actually finds herself enjoying it. Through Lucy and the grander plot, Johnson explores the nature of our violent tendencies and shows that we are all just a bad situation away from turning into monsters.

Like all great genre fiction, though, it explores all of these themes through the lens of a briskly moving, thrilling story. At 303 pages, The Loop is a lean, mean, well-oiled machine that wastes no time in setting the mood before unleashing complete chaos on the reader. While you could argue that the ultimate conflict is a little too reminiscent of his previous works, it’s still executed in a way that manages to be exciting and just familiar enough.

It is, in my eyes, the best kind of throwback horror story. It calls to mind classic horror movies like Return of the Living Dead while simultaneously carving its own path. It is unashamedly a genre story, and it certainly indulges in that element of its identity. But it also never loses sight of its cast and makes them feel like real people trapped in an insane situation. The Loop is a brisk thrill ride with a harrowing message that never forgets to be an entertaining story first and foremost. It shows that Jeremy Robert Johnson hasn’t lost his touch, and it has me excited for whatever he puts out next.