I’ve said it before, and I’ll say it again: Jeremy Robert Johnson is one of horror’s best unsung heroes. The man’s output is all over the place, but that’s a good thing. Sometimes his stories are straight-up fiction, sometimes they’re paranormal horror, sometimes they’re extreme, sometimes they’re sad, but the consistent through-line in all of them is that they’re generally pretty great across the board. His ideas define the phrase “out there,” but he usually does a good job of bringing everything to a thematically resonant conclusion regardless of how weird things get. In 2017, he released a collection of some of his best short stories from his prior two cult hits Angel Dust Apocalypse and We Live Inside You. If that collection was a greatest hits, then his new release, All the Wrong Ideas, is something of a lost track collection. The title turns out to be very apt; All the Wrong Ideas is home to the rest of his insane tales, as well as a brand new, never-before-published story that is classic Johnson. 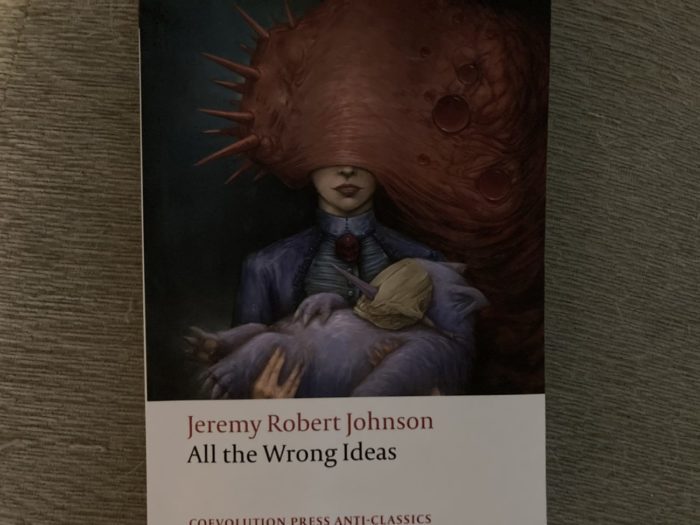 And that’s not me putting words into his mouth, either. The introduction, titled “Diametric Opposition,” is all about how he had to fight with his New York City publishers to get this collection released due to the weirder nature of the stories it holds. The thing is that most of the tales are still grounded in the kind of humanity that makes up the heart of Johnson’s best works. Take, for instance, “Working at Home.” This story follows a scientist who is overworked and isolated to the point that it ruined his marriage and his relationship with his now-teenage daughter. It makes sense, though; he works in a laboratory that conducts questionable experiments and quarantines patients who show signs of abnormal diseases.

Parasites, sickness, and a perversion of the human anatomy is Johnson’s bread and butter, and in this story, it’s used to great effect. It turns out that the current thing being studied is a large worm that uses its victims’ bodies to reproduce. And, of course, reproduction happens slowly, slow enough that the victim will become keenly aware of what’s happening due to the worm crawling under their skin. It’s a shock-filled, gross-out tale that manages to tie things up in a gnarly, disgusting bow at the end, thanks to the arc that its protagonist goes through.

There are also several works that are straight-up comedies, with the earliest example being “Ex-Hale.” It’s a very brief, very funny story about a “morgy.” Essentially, the guy, named Ray, specialized in playing corpses in movies and TV shows. The entire tale is a one-sided eulogy for the man, and there’s a darkly twisted reason for his death that made me laugh even though I’ve read this story before. The same approach is used in the tale “Priapism” and its sequel “Consumerism.” These are both one-sided conversations between a hapless teenager named Ronald and his egotistical, probably sociopathic father. Here, Johnson nails down a disturbing but hilarious mindset of being intellectually superior to others, and the results are both awful and very funny. In case you’re wondering, “Priapism” is about Ronald being found in a…compromising position, and “Consumerism” is about the aftermath of Ronald learning to drive. These stories all make a case for comedic stories working in just a couple of pages.

Still others are essentially experimental fiction, such as “Wall of Sound: a Movement in Three Parts,” which is a 50-page tale of club drugs gone horribly, horribly wrong. Rereading this story made me think of how, in the introduction, he mentioned how he was a much younger, more troubled man when he wrote the bulk of these stories, and how he was worried they might come across to some people. This is likely the story he was referring to most, as it is filled to the brim with elements some would consider problematic. Casual sex, dangerous mixing of drugs, and neo-Nazism are all topics covered in this long story, but it’s also abundantly clear that he isn’t endorsing this kind of behavior. It’s important to keep in mind that he is a self-professed recovering drug addict, and I’m sure a lot of this story comes from his experience with substance abuse.

There’s even slam poetry in here, in this case with the story “Last Thoughts Drifting Down,” but as is always the case, there’s a twist to it. This slam poem is told from the point of view of a Hydrogen bomb, about what it might think before landing and eradicating all those in the vicinity. Interestingly, this ties into the last story of the collection, the novella “The Extinction Journals.” This is a sequel story to the very funny “Sharp Dressed Man at the End of the Lane,” which, in case you haven’t read it, is about a man who prepares for the apocalypse by making a suit out of cockroaches. In “Extinction Journals,” his plan worked, and even though his suit just ate the president (who was sporting a suit made of Twinkies), now he is told by some entity that there are other survivors out there who need help.

It’s a quick read, easily finished in an afternoon, so I won’t spoil too much of it. In some ways, “Extinction Journals” feels like something of a blueprint for his excellent novel Skullcrack City. Between it and the prequel short story, it’s fixated on how humanity would have to overcome an apocalypse and is filled with dark humor and plenty of body-altering shenanigans. It’s not my favorite work by Johnson, but it’s pretty damn good and a fine way to close out All the Wrong Ideas.

Finally, I’d like to touch on the brand new short story in this collection, “The Seat of Reason.” This feels more like something you’d see in a well-regarded horror magazine than a bizzaro collection of stories, but that’s not a bad thing. I’m not entirely sure when it was written, but it’s clear that Johnson has some parental anxieties about raising his own kid if this story is anything to go on. It’s about a couple whose relationship is strained, to say the least. Michael works a security gig in China, and as such is gone for two weeks at a time. Raising their daughter is largely left up to Mary, who, in a moment of maternal desire for her daughter to be okay, buys Sofie some fish and a snail so she can practice taking care of living things.

Soon, things go very wrong when Sofie starts having next-level migraines and mysterious fluid starts pouring from her nose. All the classic Johnson themes are here; disgusting creatures, unknown diseases, and shocking plot twists. It’s all anchored by the very real fear of essentially screwing your kids up, and that theme is driven home wonderfully by the final few lines of the story. “The Seat of Reason” isn’t Johnson’s most amazing short story, but it’s more than worth a look. In fact, I’d say it’s good enough for fans to check out the collection as a whole even if they’ve read everything else in it before.

All the Wrong Ideas feels like something of a miracle. It’s undeniable that not everyone will find the twisted, insane stories to their liking, which feels risky considering Johnson found some mainstream success with last year’s gruesome and memorable novel The Loop. But I’m happy that these weird, darkly wonderful short stories have been given a second chance at life. The cover, which depicts a disgusting creature beginning to eat a woman, is pretty accurate. The stories inside are all about monsters, both literal and human, and how they can consume a person. These stories are outlandish, oftentimes gross, but oh-so memorable, and I’m hoping this offers a convenient way for curious readers to dive into the weirder side of sci-fi horror fiction.

“The Gold Persimmon: An Unabashedly Beautiful and Queer Debut Novel”

“Seeds Is a Delicious Variety Pack of Short Horror Fiction”

“The Beast in Aisle 34 Puts a Modern Spin on Werewolves”

“The Drowning Kind Is an Original Modern Fairy Tale”