Who hasn’t looked in the mirror and thought what their life would be like with a little nip here or a tuck there? It’s hard not to while living in a society that glamorizes those who spend a large portion of their wages on making their lips plumper, butts larger, waists smaller, or even spending thousands of dollars to look like their favorite animal.

According to the American Society of Plastic Surgeons, Americans spent more than $16.5 billion on cosmetic plastic surgery and minimally invasive procedures in 2018 alone. Worldwide, that number is expected to reach $21.97 billion by the end of 2023. Judging by those numbers, I think it’s safe to say that humans are obsessed with their appearance.

When I worked in the medical field, medical tourism was becoming quite popular. Because cosmetic procedures in America are pricey, some take the risk of traveling to other countries to modify their appearance for a cheaper rate. In fact, according to a 2015 report by the US International Trade Commission, between 150,000 and 320,000 Americans travel abroad every year to receive health care. This usually works out fine, unless you’re in Yummy, the newest horror offering on Shudder.

This Belgian zombie movie introduces us to Alison (Maaike Neuville), her mother, Sylvia (Annick Christiaens), and Michael (Bart Hollanders) as they embark on a road trip to a remote part of Europe for plastic surgery. Alison is tired of the unwanted attention her large breasts draw and Sylvia is along for another facelift. Michael, Alison’s supportive boyfriend, simply wants to ensure his girl gets the treatment she deserves even if Sylvia isn’t thrilled he’s come along.

On the way, the trio has an unfortunate accident in which we find out that Michael has a case of hemophobia (fear of blood) which led him to drop out of medical school—cue the foreshadowing.

Upon arrival at the hospital, we see that it is not quite what was expected. The building is run down, but the group is greeted by a friendly nurse, Janja (Clara Cleymans), and a strange travel agent, Daniel (Benjamin Ramon), who spills that the hospital is actually known for its experimental treatments.

As Sylvia and Alison are being prepped for surgery, Michael follows Daniel around the hospital in search of drugs. The two stumble across a room in which a woman is tied to a gurney with a mask over her face. The woman is whimpering and obviously in distress. Michael, ever the gentleman, takes the mask from her face and unties her. What he doesn’t know is that she is Patient Zero (Louise Bergez), the result of an experimental treatment in search of everlasting youth and releasing her begins a zombie outbreak within the hospital. The movie wastes no time introducing these creatures roaming the halls feasting on patients.

Yummy is a heavy-handed commentary on vanity. Everyone who meets Alison comments on how perfect her body is. Yet, she is painfully unhappy with her appearance and goes to these great lengths to have surgery, leading her family into the heart of a zombie apocalypse. Sylvia loses her fight for youth by succumbing to a zombie bite and being put down by her own daughter. At one point, as the viewer is working to figure out why patients are turning into zombies, Dr K (Eric Godon) suggests, “God is punishing us for interfering with his creation.” It is at this point that we learn that he was experimenting with enzymes to stop aging, and this is the result. This seems to be a comment on the lengths that people will go to make themselves more beautiful; undoing what God has done. 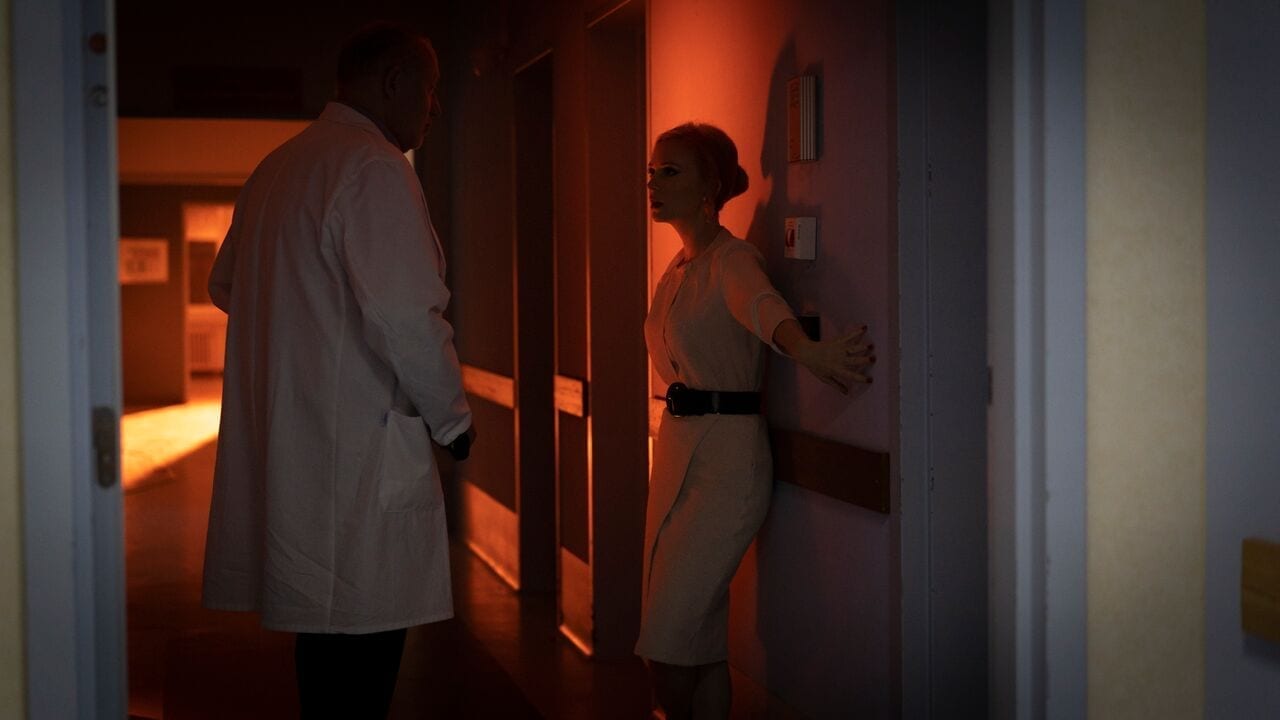 Yummy is a horror comedy with tons of gross-out, gory fun and blood spatter harkening back to the B-movies of the 1980s. At one point as Alison and company are planning an escape, they find the only way left to the outside is through a garbage shoot where the crew lands in dead bodies and medical waste. We’re also introduced to a zombie who is eating herself and seems to have already gotten through the bottom half of her body. Ironically, she is the fastest of all the zombies in the hospital and gives the survivors a run for their money. Michael also has a recurring gag where he vomits over seemingly nothing (pun intended).

The movie does have some head-scratching moments. Such as why is Daniel, a travel agent, working in a hospital? He explains it is because he can take advantage of the women who want to show off their new bodies on expensive trips, but that doesn’t make a ton of sense. And why would you continue with your surgery when you notice all sorts of health violations in the operating room, like a lazy surgeon drinking coffee next to the operating table and nurses without the proper sanitary or personal protective equipment? Perhaps this is another commentary on the lengths people will go to achieve their idea of perfection.

Writer/director, Lars Damoiseaux, gives us some great characters in the young couple, Alison and Michael. Alison turns from being a demure young lady to a zombie-fighting heroine who steps up to lead a group of survivors. Michael goes from being a medical school drop-out to someone who puts the knowledge he gathered while in school to use in the fight against these flesh-eaters as well as overcoming his extreme hemophobia.

If you’re a fan of innovative zombie movies that take a different look at how zombies come to roam among the living, you’ll have fun with Yummy. And if you’re a lover of B-style horror films with a steady diet of violence, laughs, gore, and wall-to-wall blood, look no further than this Shudder exclusive.

Yummy is available for streaming on Shudder beginning June 25.