I have a growing love for paranormal horror right now. Not exactly sure why; I’ve always been a slasher kind of guy, but, paranormal horror is just hitting right for me these days. That’s why, when given the opportunity to check out Vertical Entertainment’s new horror film Behind You, I jumped at it.

When I originally watched the trailer, it seemed to me like it was a mash-up of Insidious and Oculus. While that might be partially true, sadly it isn’t what I expected it to be. Now, that’s not necessarily a good or bad thing, it’s just something that I noticed, and it might be something you would’ve thought about the movie, too. To be fair, it does grab a few elements from those two films, just not a substantial amount.

Behind You is the directorial debut of both Andrew Mecham and Matthew Whedon. It stars Jan Broberg (Abducted In Plain Sight), Addy Miller (The Walking Dead), Elizabeth Birkner (The Outpost) and Philip Brodie (The Outpost). The story is simple: While staying with their aunt, two sisters notice that all of the mirrors in the house are covered. After one sister uncovers one in the bathroom, she releases a deadly, malicious spirit.

As I said, it’s simple. That’s not necessarily a bad thing; simple is often preferred over overly-complicated plots and contrived stories. With all that said, is Behind You an example of why less is more in terms of scares and storytelling? Well, let’s try and decipher this one together. 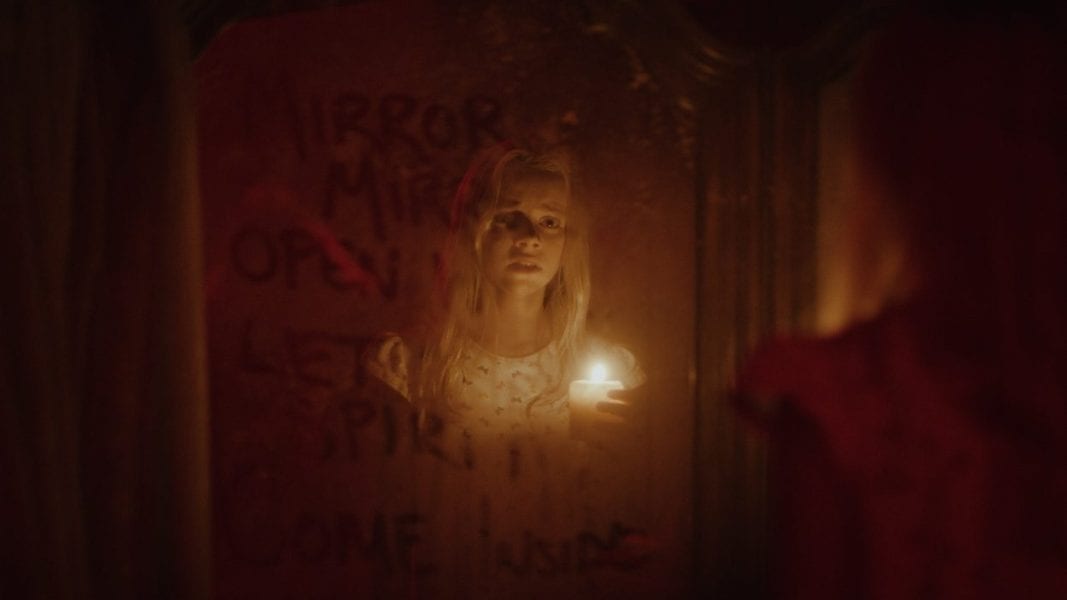 One of the most important things in any movie is acting. Thankfully, I can tell you that the acting in Behind You is definitely not lacking. It’s not award-winning, but there are some impressive performances to behold. Elizabeth Birkner as Claire is the most effective. I’m not going to lie, it starts off slow as she’s basically mute, but, as the movie gets into the meat of things, her performance gets more in-depth and intricate. She does a great job of portraying all of the emotions and pain of what her character endures—it’s great.

Now, generally, the cinematography is standard and quite vanilla, but there are a few great shots thrown in there that heighten the mood and overall ambiance. There’s a shot where one of the characters, Charles (Philip Brodie), is “taking care” of something at night and the lighting, the framing, and the angle is so perfectly aligned. This moment is very beautiful.

Also, the sound design and mixing are effective enough to warrant some bone-chilling sounds and string hits when scares arise. There are a few moments where you can hear great cracking and squishy, wet sounds. Along with some whispering that happens in parts, I think the way the sound was mixed and meshed in with the scenes was, for the most part, effective and creative.

One part that is a mixed bag of sorts is the tension. Sometimes the tension is fierce, efficacious, and thick; other times, it’s uneven and built too quickly to have any sort of punch to it. It’s a little distracting to have such an uneven build for something that doesn’t pay off, or sometimes is abandoned in the process of the build-up. 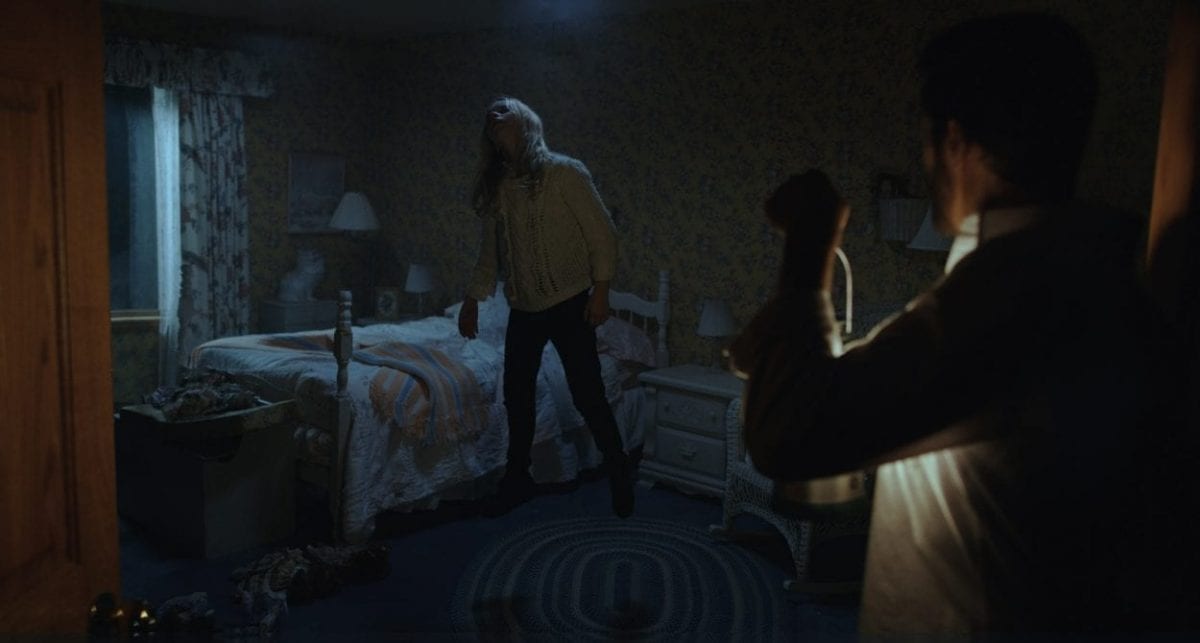 An area of true contention on my viewing was that it just wasn’t that scary. Creepy? Sure. But I didn’t have any moments where I jumped, cringed, or moved in the slightest due to an actual scare. It’s a shame because the idea here is a goldmine for potential scare opportunities and setups. It could be due to the string hits that apply whenever they think you’re going to be scared; it doesn’t do it for me, it sounds too generic and plain for horror at this point. Maybe if the thumps and deep hits of music kicked in were a little more original, it would’ve worked.

There is one very specific moment in the movie that I can’t exactly get into because it’s a bit of a spoiler, but, it has to do with dialogue that makes no sense as to why it’s said to a certain character ,unless it’s the only vehicle to be used for an easy solution to a problem they’re dealing with. It’s a little too convenient of a thing to say, and it has no value to the scene other than to set up the next scene. It really bothered me and it completely threw me off when it came up.

Furthermore, there’s a little bit of muddiness in the story that comes in the form of an explanation pertaining to the opening scene of the movie. The story as a whole is a simple story to tell, so I’m not sure why they added the ‘twist’ that they did. It came off as unnecessary and forced. If you have a simple story, that’s completely fine; no need to muddy the waters with extra add-ons for complexity. Sometimes simplicity is all you need to be effective and stand out.

Also, this is a rare occasion where I have the feeling that this movie would’ve been a lot better off if it was just maybe 15-20 minutes longer than it was. The third act is really when things start to move and the action kicks off with conviction. Truthfully, that’s what I enjoyed most about my watch. If the action started a little sooner and we had more time to be immersed in that setting of the dark, dreary, and tense situation at hand, it would bring this film up another notch to where I believe it should be. 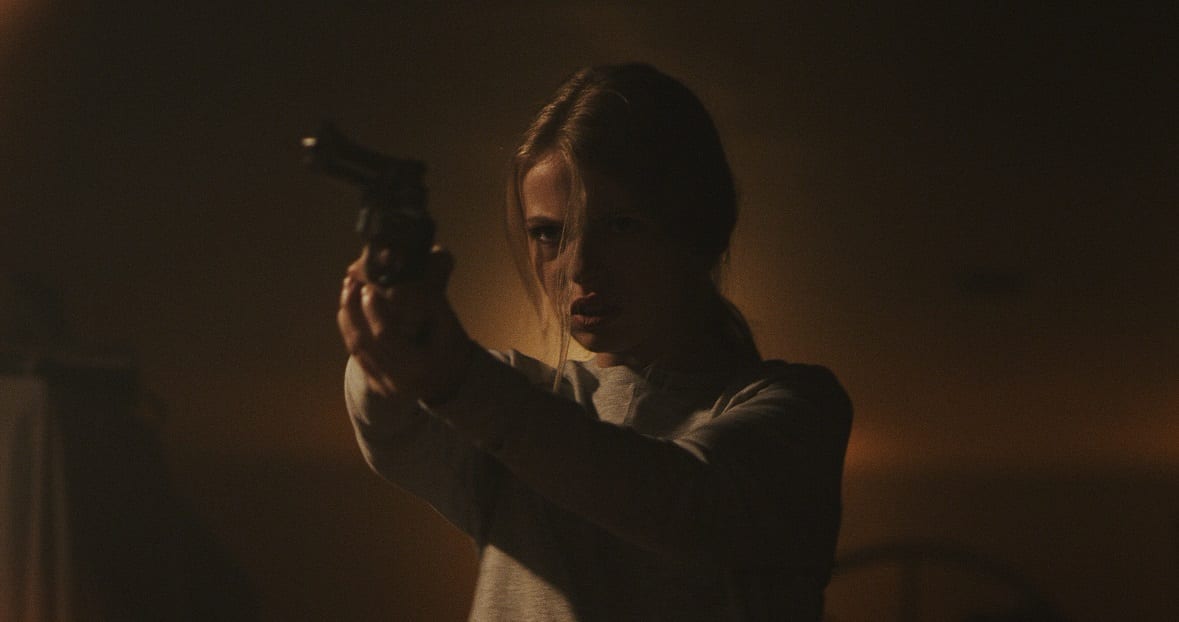 I try my best to enjoy the movies that I watch and set forth a positive attitude toward horror. Do I think that Behind You is some amazing, ground-breaking masterpiece that should be a contender for horror film of the year? Sadly, no. It gets a little confusing, there are a lot of obviously placed cues for the following scene to kick in, the best part of the film is 15-20 minutes too short, and it ultimately feels uneven.

That being said, I still found some enjoyment out of my time with it, and I hope that you give it a watch yourself and have the best time you can with it. Elizabeth Birkner is the stand-out performer, the sound mixing is great, and there’s a fair amount of tension and potentially some scares for other, less jaded individuals. It’s most definitely a mixed bag in every sense of the phrase, but that’s what makes film so great. I do think it’s a solid first outing for Andrew Mecham and Matthew Whedon as a duo. I really hope you guys can give this one a chance.

Rating: 5.3/10. You can purchase Behind You here. Make sure to let me know what you think. Do you agree or disagree with my rating? I’ll be waiting!