What separates us from sinister things, people, or ideas, and how do we know when malevolence lurks nearby? When a protagonist transforms into something grotesque and becomes an object of horror themselves, they cross a threshold and let evil inside. Boundaries of survival spaces are defined and eventually violated in dystopian, zombie, and supernatural horror subgenre films. The concept of liminality combined with foreboding dread and inevitability is hard-wired in the horror genre. Our Outside Your Window series explores themes of boundaries and thresholds in horror films.

Join Collin Henderson in his analysis of Pyewacket, the story of a grieving, discontented teenager whose yearning for occult power invites baleful entities into her life.

When you’re a kid, it’s difficult to view adults as fully formed people with hopes, dreams, flaws, fears, and problems. You just don’t have the real-world experience needed to empathize with people who have been on Earth longer than you have and seemingly don’t relate to you in any way, shape, or form. This is something that protagonist Leah (Nicole Muñoz) discovers over the course of Pyewacket (2017), a low-key, chilling, and disturbing horror movie from writer-director Adam MacDonald. By trying and failing to come to terms with this, she changes into someone much more troubled and much more volatile than the person she is at the beginning of the movie.

It’s been an indeterminate amount of time since Leah’s father’s death when the movie starts, and we learn early on that the relationship she has with her mother can charitably be called strained. In the first scene with Laurie Holden’s depiction of the mother, Mrs. Reyes, she is seen crying and presumably drunk in her bedroom, mourning the loss of the family’s patriarch. She is abrasive and oftentimes downright mean to Leah, at one point calling her and her friends losers. And to make matters worse, she questions Leah’s sudden interest in the occult a little less than a third of the way through the movie. Leah’s response is simply that it makes her feel better. 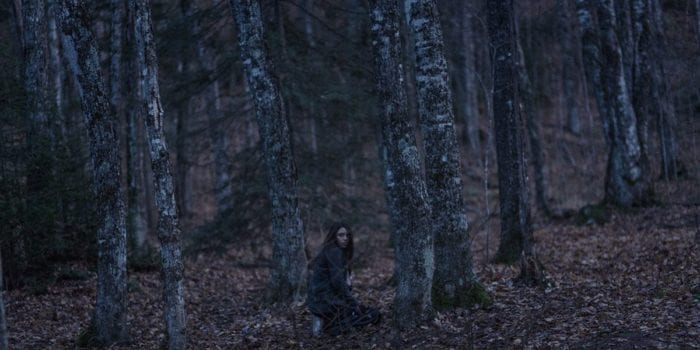 It’s this dynamic that comes to define the central conflict. The pair move out to an isolated place in the middle of the woods, much to Leah’s dismay. It means leaving behind her friends and her school—pretty much her whole world, at this point in her life. In a lesser movie, the mother figure might be portrayed as downright nasty or evil. Here, though, Laurie Holden’s performance makes her more of a flawed mother trying to do what’s right for both of them. She apologizes to Leah for her outbursts and begs her to understand that the reason they’re moving is because their old place has nothing but painful memories for her.

The woods quickly become a metaphor for the maze of grief and teenage rage Leah finds herself immersed in. Almost immediately after moving and fighting with her mother, she goes into the woods and summons a spirit known as Pyewacket to kill her mother. Part of the ritual involves giving her own blood to the witchy brew she makes. To do that, she has to slash her own wrist in a scene that is both uncomfortable and traumatic for its barely veiled depiction of self-harm. Immediately after that scene, she tries to staunch the bleeding using tissues and bandages but does a poor job of it. The wound spills onto her dinner plate that night. Immediately, her mother goes to comfort her and helps her clean it up.

It’s a short segment of the movie that plays up how irrational and erratic grieving people can be. Not only does her mother completely change her tone from earlier scenes, but Leah herself seems to come to a realization that she acted out of anger and spite instead of thinking things through. Her mother helping her clean the wound is a great scene since it says so much while seemingly showing so little. It shows that people coming together to help each other through tough times adds up to more than people rejecting one another.

This being a horror movie, though, the ritual is more than an act of teenage rebellion. The seemingly safe haven of their home is broken into the morning after, with the front door left open and dirt trailed inside as if someone came through wearing filthy footwear. The woods where Leah expressed her frustration suddenly become a place that’s alien and terrifying. In this case, the two characters are surrounded by the representation of Leah’s grief, and her mother is largely oblivious to what is going on. In another, more conventional movie the two characters might work things out and come to terms with everything that’s happened. Here, despite good intentions, the two just do not identify with one another for a variety of reasons.

It isn’t long before Leah is haunted by whatever Pyewacket is. She wakes up in the middle of the woods, her wound freshly bleeding. She can’t get the conflict and fear out of her mind, and it starts to manifest itself physically, negatively affecting those around her. She invites her friend Janice, a fellow occult enthusiast, out to the woods, and nothing seems to happen until the next morning when Janice is in Leah’s mother’s car, insisting that she be brought home. Something happened to her in the woods, and we never find out exactly what, but it’s clear that exposing her to this negative energy will have long-lasting consequences.

In many ways, this is a traditional supernatural story, complete with some weird spiritual antagonist, and this means that there’s a scene where Leah consults an expert to try and figure out how to stop these disturbing occurrences from continuing. The expert tells her that she is the bridge for the negative energy, that “black magic begins and ends with you” and that Pyewacket can take on any number of forms. Like everything else in the movie, it further serves the idea of this supernatural conflict being a symptom of Leah’s grief. She is the one that brought such negative power into their home and it would have to end with her as well. 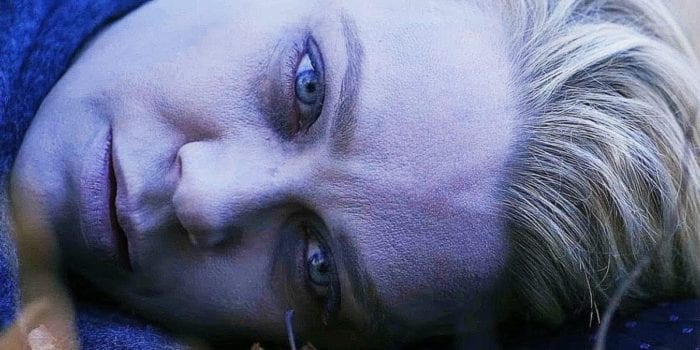 The problem is that when she gets home, she sees the corpse of her mother in the woods, then hears her call out from the house. It becomes unclear how much of this conflict is in her head and how much is real, but she ultimately finds her mother in her bed and drenches her in gasoline, then sets fire to the house. What was supposed to be an escape from the ghosts of their shared past is destroyed by Leah, who believes that Pyewacket actually killed her mother. This movie paints a worst-case scenario for two people struggling to deal with a great loss. Like I’ve already said, in another movie, the two might have come together to defeat the supernatural evil, but here, they are both consumed by it, literally and figuratively.

The film’s terrific use of its traditional set-up and structure weaves a tale of two very different people dealing with death. Leah is ultimately the main character, though, and with this being her story, it focuses on her growing pains in trying to understand why her mother brings them to a new home. It shows how rash decision making and a lack of emotional maturity can alienate those closest to you and ultimately lead to  horrible destruction. Unlike other coming of age horror movies, Leah doesn’t come to some grand realization until it’s far too late, and that is where the terror comes from. It isn’t until after everything’s happened that she manages to realize just how wrong she was for directing her grief at her mother. But by then, it’s far too late to make amends.