Every horror fan has their blind spots, the guilty gaps in their library that loom like undeclared contraband at the borders of every conversation. They shame us with their absence and poke holes into the love letters we write to the genre we love with every pointed exclamation of “How have you not seen _______!?” For me, the empty chair at my recital, the loved one I know I’d be close to if I ever called, is the original 1982 Creepshow. Despite the miraculous list of names at the helm of the classic horror anthology, written by Stephen King, directed by George Romero, and featuring gore effects from Tom Savini, I just never got around to it.

Even when Bravo, back when Bravo was cool, did their 100 Scariest Movie Moments and featured Creepshow’s roaches bursting from the corpse of E.G. Marshall, I still somehow never found the time.

But the time is now, and, thankfully, there’s the new Creepshow from Shudder and Greg Nicotero. What began as a film is now a horror anthology series of hour-long episodes featuring two short, scary, splattertastic stories. Whatever juice and nightmare fuel powered the 1982 film clearly pulses and pounds through the new series, especially the first episode. Based on the anarchic morality stories of EC horror comics like Haunt of Fear and Tales from the Crypt, the new Creepshow leans into these roots with comic-book-panel style transitions between tales and a wraparound narrative featuring a Jim Henson nightmare version of the Creep itself.

With a villainous cackle and a turn of the page, we’re launched into a blood-soaked Twilight Zone that showcases the best kind of fun a horror fan can have. 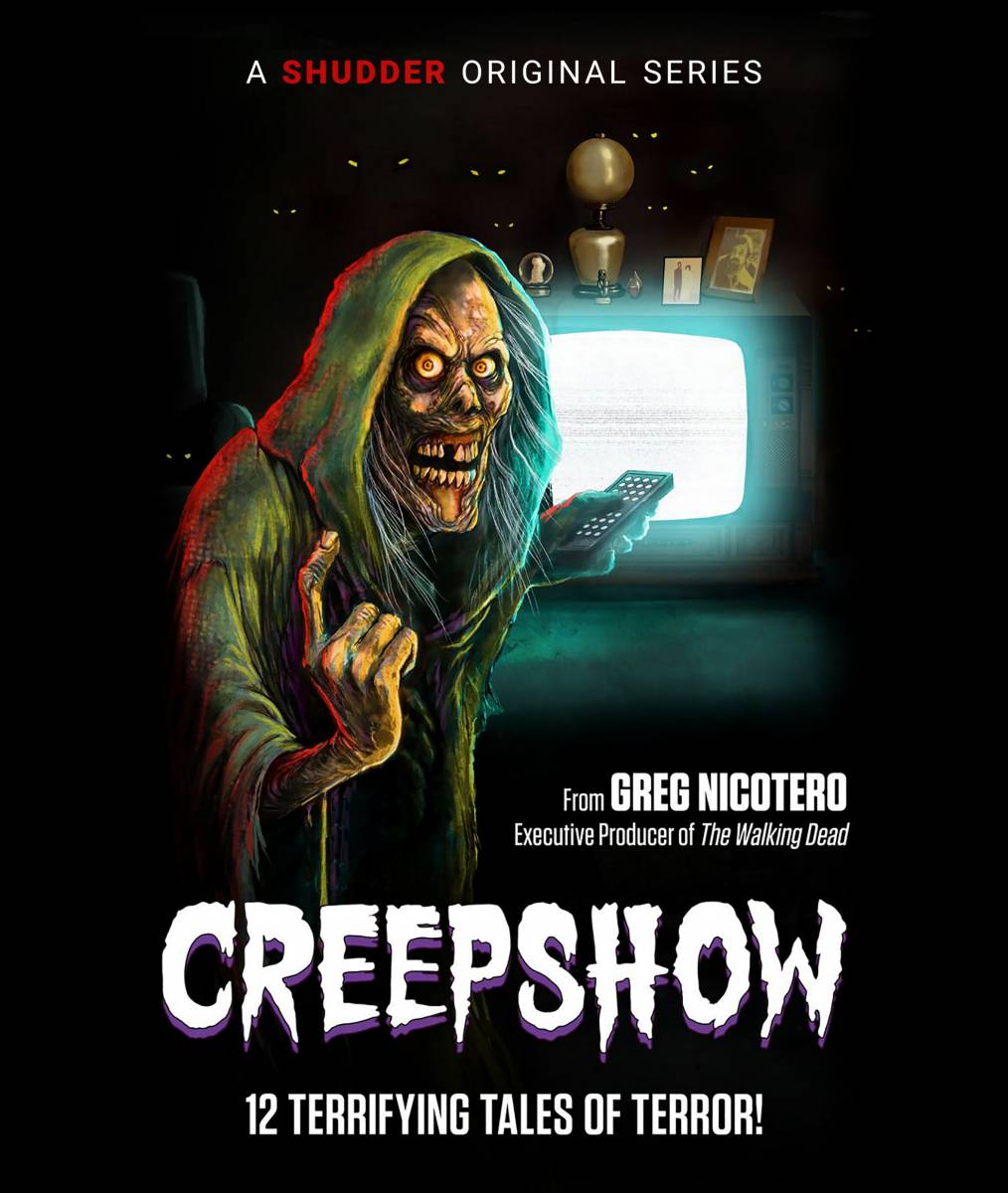 Based on a short story by Stephen King himself, directed by producer Greg Nicotero, and adapted by Bryan Willinger and Philip De Blasi, the first segment of Creepshow tells the story of a boy and his alcoholic father. The story is lean, mean, and repulsively gooey in the best way. The small cast is stacked with names that make short work of any doubts about Creepshow’s horror credibility. Tobin Bell of Saw fame, Giancarlo Esposito of Breaking Bad, and back for more creepshow after a long absence, Adrienne Barbeau as charming as she was in the original, reminding everyone of the crushes they’ve nurtured since her turn in The Fog.

“Gray Matter” is as much a taste of what horrors await us in the series as it is a compelling story on its own, and it never disappoints. The young boy at the story’s heart turns in a grounded portrayal of a child in crisis, as his father drinks and drinks and grinds their lives into the pavement like a flattened beer can. Things get slimy and violent as the story escalates into one of the most disgusting and stunning conclusions since Brian Yuzna’s Society. Greg Nicotero has always been a champion of practical effects and brings all those skills to bear here in ways I know better than to spoil. This is the frantic extreme end of the spectrum sure to delight fans of the original and shake awake the unfortunate souls who slept on it (like me).

Most appealingly, the show manages to perform the same tricks of its EC Comics roots and the original by using its horror as an allegory for something more true to life. The fear and disgust of growing up with an alcoholic parent, the complex cocktail of revulsion, pity, fear, and resentment all play out in Willinger and De Blasi’s script, the crayons of real trauma shading between the lines of a classic monster story. As Timmy, the dutiful suffering son played by Christopher, deals with his father (played frighteningly true-to-life by Jessie C. Boyd) drinking and the resulting body-horror, the parallels are easy to draw between an unpredictable drunk and the supernatural slime monster he becomes.

Part 2: The House of the Head

The exact opposite is explored in the episodes follow-up story, written by Josh Malerman and directed by John Harrison. Adapted from one of Bird Box author’s own short stories, “The House of the Head” exhibits all the restraint and subtlety that “Gray Matter” leaves chewed up and twitching in the basement. A little girl, Evie (in a strong performance from Cailey Fleming) , playing with her dolls discovers a grotesque severed doll head terrorizing her doll family, the Smith Smiths, when she’s away from them. She tries to recruit tougher dolls to protect the Smith Smiths but soon discovers that’s easier said than done as the plastic body count begins to rise.

The segment is a minimalist, taut, whimsical look inside the overactive imagination of a girl coming to grips with danger, and processing it through her toys. There’s a playful ambiguity to Harrison’s direction, a secret that the actors, such as Evie’s parents (played pitch-perfect by Rachel Hendrix and David Shae) and the doll store owner, Mr. Ogman (played with a mix of foreboding and golly-jee small-town charm by Guy Messenger) refuse to reveal.

Where “Gray Matter” goes big with visceral gore effects and monster mayhem, “The House of the Head” literally goes small, limiting its terror to a family of dolls that matter because of how believably they matter to Evie. We’re immediately sent flying back into our own imaginative childhoods, where backyards were jungles and our action figures had grudges with each other.

If the first episode of the new Creepshow is any true indication of what’s to come, this is going to be a hell of a show for horror fans, and the excuse I’ve been looking for to finally get off my ass and watch the original to whet my appetite between episodes released on Shudder.