The world is full of small and deadly things for Sydney Clara Brafman. Her Tiny Terrors short film project finds all the ways to juxtapose the precarious relationship to tragedy, injury, and death that lurks behind each of life’s hum-drum moments. When we got the opportunity, we tried to get to the bottom of why she finds so many scares in the littlest things.

The most boring parts of life are Saw-esque death traps in Brafman’s films. This strange tension lurks in Brafman’s life off-camera as well. The young filmmaker has spent her entire life, avoiding a vicious killer, hiding in plain sight. “I actually have a severe allergy to cocoa! It’s fatal if ingested, and I’ll typically have a reaction if I even touch it.”

Brafman then runs through the realities of a filmmaker with a fatal cocoa allergy. “My sets are always chocolate-free, and I refuse to have any form of chocolate in my films. It’s my little way of crafting a world without the thing that can kill me.”

When something so small threatens your life, you get perspective on how fragile human life can be. “I think that at any given minute, we’re unknowingly dodging disaster at every corner,” she explains. “It’s a skill, and also a curse, to be able to walk into a coffee shop and assess all the ways things can go horribly wrong.”

For those wondering about this killer coffee shop, let Brafman give you a few new nightmares. “Maybe the ceiling fan will dislodge and decapitate us, maybe a broken container of bleach leaked into the coffee grounds and that cold brew is toxic, or maybe a small electrical surge will cause the bagel toaster to ignite.” This life spent under chocolate threat leads her to some dark, and fascinating places.

“I’m always one degree away from anaphylaxis shock due to mislabeled ingredients and hidden cocoa, which is terrifying but also incredibly inspiring. It forces me to think ahead in every scenario, plan out what would happen and what I would do, but also lets my mind wander into these uncharted territories of disaster.”

The world of Sydney Clara Brafman, she clarifies, is our world, too, cocoa or no. “For any of us, we’re all so squishy, and it’s so easy to make a fatal mistake, it’s really a miracle any of us are still alive. That’s such an amazing brain space to explore, and I love it.”

That precariousness is at the heart of her ongoing Tiny Terrors short film project, in which she (and any willing collaborators), tell bite-sized stories about the scariest parts of their day-to-day. This is not a land of masked killers or undead hordes. Horror comes in the form of a boba straw. A chicken wing. That bite-sized aspect is not incidental or budgetary, either. Short films matter a great deal to Brafman.

“In my experience so far, it seems to be a common consensus among filmmakers that everyone will just make short films until they move on to features or tv, and never look back. This is certainly not the case for me, and I wanted to establish that early on,” she said. Tiny Terrors is as much a defense of the form as an exploration of their subject matter.

“I love short storytelling as a medium, and I decided to give myself the space I needed to explore that. I don’t think every idea needs to be 90+ minutes, and often I’ve really enjoyed short films far more than their feature counterparts (Lights Out, or Excision, for example). I can understand making a proof of concept with the intention of using it to make a feature, but I also think it’s ok to leave the story as small as it is.”

This bold stance against the constant push towards longer stories is not new for Brafman. She’s been interested in challenging convention from the very start, with a short student film, “Falling Through,” in which she threw a super-8 camera out a window.

“[It] started as an idea meant to challenge the college classes I was enrolled in at the time, as well as the equipment we all used and how precious it all seemed. I never really knew what was going to record or even develop, and I was so thrilled with the result. The camera ended up spinning uncontrollably on the way down, and the end result was a wonderful stream of light and color, and just before the film cuts out, we land.”

This was a definitive experience in Brafman’s artistic development. “I see a lot in this film, which is kind of funny because I don’t really consider any of my work experimental, and I usually don’t like that type of storytelling. But, I see a lot in terms of death, unsurprisingly.”

This love of brash, iconoclastic, quick storytelling leads us to Brafman’s new festival smash hit, “The Only Thing I Love More Than You Is Ranch Dressing.” The film follows a young couple eating chicken wings before things get bloody, brutal, and hilarious. The 30-second film took home the award for “Best Editing in a Short Film” at this year’s Cinepocalypse Film Festival and “Best Gore” from the 60 Second Horror Challenge Contest. Watching the film with an audience has been a highlight for the filmmaker.

“It’s been really fun watching people experience Ranch for the first time. So far I’ve found people go through 3 stages while watching the film: first, they’re like “ah, this looks cool, it’s starting off so quick, and it looks really hardcore.”; then “holy shit, OH GOD”; and lastly, “Hahahahah! What the fuck, that was it?!”. A friend literally told me he went through “a journey of emotions” while watching it, which is still so wonderfully hilarious for me.”

Hilarity, it seems, is a vital ingredient to Brafman’s artistic vision. She’s a staunch defender and proud evangelist for the horror-comedy, another by-product of a young acceptance of her own mortality. “Circumstance and the sheer improbability of certain disasters happening are just ridiculously fun sometimes, so I think being able to combine those awfully grotesque scenarios with a sense of humor is the perfect space to play around in.”

But it’s not just finding the funny moments in horror, that appeal to her. She’s also mining comedy for its unsettling undertones. “I find that horror doesn’t need to be scary; it can just be upsetting and conflicting. And I find that kind of emotional turmoil is actually quite serious because you’d been laughing or finding something humorous, but then it’s also deeply disturbing, and you have to question that in yourself. Is it ok that it’s funny? Should I still be laughing? The answer is yes. Things can be funny, and that’s ok. And when they stop being funny, that’s the real magic.”

These comedic and horrifying takes on quotidian life can have an unexpected cost, however. In 2017, Brafman’s film “Frowny Face” (or simply “:-(“ ), a woman trips while walking up the stairs. The film gets its juice from a gruesome accident with smoothie straw. She trips and drives the straw into her eye in a shocking payoff.

Fun enough on its own, the film seemed became a dark prediction when a fan sent her an article. Apparently, a woman had died in a freak accident involving a fall and a metal drinking straw. The experience of life imitating her art deeply affected Brafman. “Someone sent me that article, and it was really quite shocking. According to the article, “a woman fell onto a 10-inch stainless steel straw [that] entered her left eye socket and pierced her brain.” One can’t help but feel a chill at such an improbable and horrific way to go. The story had another effect though and reaffirmed Brafman’s dedication to the fears we’re embarrassed to admit.

“If this has taught me anything, it’s that we should be more open and willing to share what scares us. Fears aren’t meant to be precious, and it’s ok to never overcome them. I think they make up so much of who we are as people, individually and together. But we can help each other a little along the way by destigmatizing them, and making these phobias smaller.” 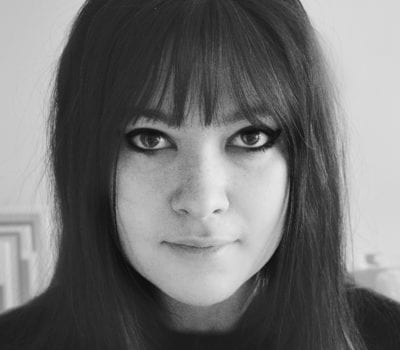 Brafman isn’t slowing down, either, with plenty of projects in the works. “Most urgently, I’d say, is pre-production for my next larger short. I’m working on something that’ll probably end up being a whopping 4 minutes.  It’s called “Stay Home,” a film about an agoraphobe in the apocalypse.” She’s also given herself a challenge. “I’m also always committing myself to a 15-second film every year, and I have big dreams for a new one, involving lots of camera work and choreography, so that’ll be easy!”

Brafman isn’t afraid to challenge the mainstream with her work and her outlook on the genre. Tiny Terrors is still going and accepting submissions of scripts and stories. She doesn’t see an end to her time in short film. “Micro filmmaking is emerging in new and different ways, and being able to captivate someone in such a short amount of time is a huge challenge. I’m leaning into that, and being as loud and fast as I can right now.”

And why not? Why stay quiet or stop chasing your passions when your life could end tomorrow by a piece of chocolate?