25YL got the opportunity to interview talent from the highly anticipated new series Critters: A New Binge. This short form series introduces the cult classic to a new generation, while giving everyone’s favorite Crites a new adventure. In our second interview, we talk to series director Jordan Rubin. All episodes of Critters: A New Binge are currently streaming on Shudder.

25YL: So, Critters. I interviewed Bzaun just earlier, and I was letting him know about the site I work for, 25YL. We wrote about the Shout! Factory Blu ray box set back in December. So, we talked about the first four films, the fan-made film, as well as what we knew about your New Binge at the time. Did you come to the New Binge as a fan of the franchise or …

RJ: Yeah, I did. You know, I remember having watched it when I was younger. Then, I revisited it when I got the call about possibly pitching an angle for this one, and I went back and watched it and got excited again.

25YL: Yeah, easy to do. I enjoyed revisiting it. Part of the fun of this to me, as a fan, is it seems like everyone wants to hop on this Critters kind of re-entry. Shout! Factory already put out the box set. So, it’s good timing for you. David Gordon Green said after the success of Halloween if he could take a stab at anything, he would have liked to have done Critters or Ghoulies and I hear a SYFY …

RJ: Yeah, I saw where he mentioned that.

25YL: Yeah, and SyFy has finished a project?

25YL: Well, we’ll stick to your project. You’ve kind of been able to set a tone with this one, kind of the first to bring them back. So, what would you say has been your approach to the franchise?

RJ: Well, obviously, there’s that reveal. You get a chance to watch it or not?

25YL: I got to watch the first episode and started the second before having to run off, but I’m liking it.

RJ: Oh, I appreciate it. Yeah, there’s sort of a big reveal that we did, not like anything that was in the original series, and so that’s one thing. But also just updating it for modern times, making it feel much more relevant. Also,just the comedy. I come from a background in comedy and just infusing the show with a little more of that, but we aren’t mocking it and we aren’t getting meta, but actually, you know, having fun and having the Critters be a bit more… getting a laugh at their characters and having them talk a lot more and have a lot more subtitles than there was in the original franchise. You know, I’d say that, if anything that I brought to it, that’s definitely a new spin, sort of the comedy. 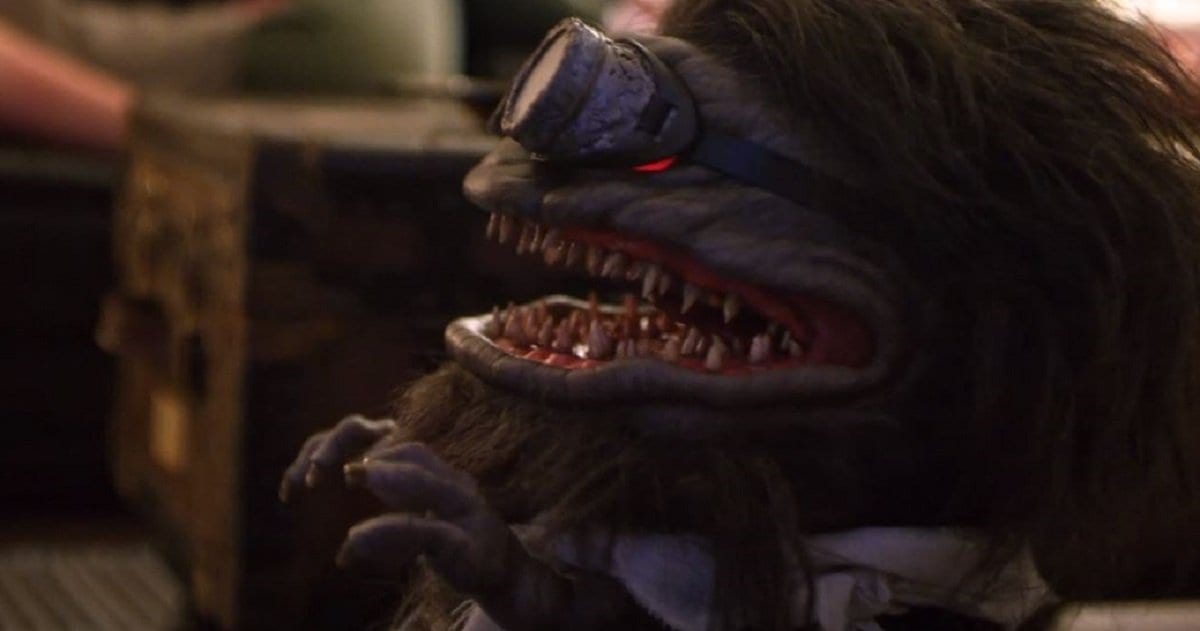 25YL: Right. And I like that they kind of laid that ground, I think, early on, because there was a point in the first film where one gets blown away with a shotgun and it cusses, and they said that got a great reaction from the audience even though they were a little nervous about it at the time. You’re just playing off that. So, of those original films, was there one of those that kind of spoke to you a little bit more as you approached this?

RJ: Yeah, it really was the first one. That was my favorite, you know. I loved that first one, and I go back and I’m a big fan of first movies a lot of the time. I don’t know why, just that whole, the whole origin story. Like I love Dark Knight obviously, but people don’t talk enough about Batman Begins. I’m just a fan of that. I love the comedy and silliness they brought to Gremlins 2, but I personally like the first one. It’s just a stand-out to me. It’s this amazing film. You know, and for me, in the same way Gremlins spoke to me, so did that original one [Critters]. I kept going back to that for reference and a jumping-off point.

25YL: Right. So, speaking to original intent, I was thinking that originally this was going to be part of Verizon’s little streaming service. You were going to do the narrative as internet shorts to complete your story. Did that affect how you directed it or approached it, having to do these short segments?

RJ: Well, Verizon bought it originally, the pitch, and financed it as a digital series in the exact same way that we are showing it and airing it now. So that was always the intention. It just changed who is distributing it and releasing it. But the intention was always to have it be a serialized series with eight episodes.

25YL: Right, and you just shot it as one long continuous narrative?

RJ: Yeah. We shot it … we block shot it. We shot it very much like you would shoot a movie, but we’d always scripted it knowing there were endings and there would be sort of, almost feeling like it was an old-school kind of reel, like around between eight and 11 minutes. There would be a wrap-up for the next episode, cliff-hangers, things like that.

25YL: And then, you worked with real puppets on this. So, you also did some of that on Zombeavers. Did that bring something to the experience?

RJ: It did. Although, this film, this series was a whole new level, because the Zombeavers puppets were very flat on the ground and rodent like, and there wasn’t … they weren’t talking and expressing themselves like a human would, and so the humanistic qualities that we infused into the Critters on this one presented its own challenges but also made it a lot more fun. It made the scenes a lot more interesting to be from human actors, because they’re actually talking to you or yelling and interacting with something that is standing up and is able to interact with them more than just like a ferocious kind of animal. So, there was a lot of stuff I learned and a lot of, you know, special effects tricks, tricks that I brought along in my pocket from Zombeavers, but there was a whole new challenge.

25YL: Sure. Have you had a chance since you kind of got started with all this to talk with any of the Critters fandom or get some reactions?

RJ: Yeah, I mean, I was so busy with it. There is a Facebook group that’s pretty big. They are called Critters Rehatched, and they’ve always been great and supportive, and I spoke to a couple of those guys. You know, they were very eager to hear anything about it, or gain information, but I’d signed non-disclosure agreements, so it was very hard. I was trying to be as nice as I could and tell them as soon as I had stuff I could tell them, but I was amazed at how big of a fan base there is for Critters and how much they couldn’t wait to get information. It was interesting to just see that and work on something that already had a fan base. I hope they are happy with what I did.

25YL: What is it that you think makes these audiences–and you’ll see what I’m doing here–hungry for Critters more than 25 years later? You know, we’ve had Stranger Things. There almost seems to be somewhat of a return of the latch-key protagonists, or teenage protagonists seeing these monsters and invasions through their perspectives. How does that help or add to this Critters: A New Binge?

RJ: Right. Could you say that one more time?

25YL: Yeah, what makes audiences so excited about this? What’s your perception of that, that Critters is able to return? We’ve had kind of this renewal of interest in these films.

RJ: Yeah, I think it’s just the … I think there’s the nostalgia factor, obviously. I think a lot of people grew up … It seems like, from what I can tell, there is–which I didn’t know until getting involved in it–there’s this whole big Critters fan base that is separate. You know, very often there are people that, they just love all of these type of creature features, and say bring on Gremlins, bring on Critters, but then, I find there’s a lot of people that are Critters purists, and they’ve always been out there. And then, like you said, I think there’s a nostalgia for the 80s and the young kid, latch-key protagonist to discover this crazy world like Stranger Things, like all these things. I don’t think it ever sort of went away, like J.J. Abrams’s Super 8 and all those kind of films throughout the years. They’re examples of things where it’s always been alive. I think maybe in the digital space, there’s now the opportunity to revisit a lot of these things at different budget levels, and so it has sort of brought back a sort of independent film budget and feel and content that sort of died out for a while. I think that might be the reason. That is because they’re either making very low budget movies, or they make massively expensive, big CGI movies, but there’s no middle ground anymore. But all of a sudden, it exists now because there’re avenues for it.

25YL: Right, and your project has landed at Shudder, which I was excited to see when it was announced. So, maybe platforms like Shudder also support these kinds of projects, especially in this genre?

25YL: What are you hoping fans get out of Critters: A New Binge tomorrow?

RJ: What am I hoping they get out of it?

RJ: Yeah, I hope they enjoy seeing those monsters that they know and love, and I hope they feel that I’ve done justice to the franchise. And I also hope they get a lot of laughter out of where we take it and that it is a fun ride and not just scary, but sort of both.

25YL: Is this it for you where Crites are concerned, or would you like to have an opportunity to continue working with these Critters projects?

RJ: I would love to continue on it, and I think all of the Critters are in storage. It would be fun to jump back in. We left it with a cliffhanger ending that we could revisit and continue for another season. I’d love to come back if the fans and Warner Brothers will have me, and Shudder.