In my analysis of the first episode of Ghoul, I remarked how surprised I was by the little amount of on-screen horror we saw during the first 40 or so minutes. And while the second episode does bring Ghoul closer to the show I anticipated it to be, it is still very much keeping its cards close to its chest. You might walk away from Ghoul a little disappointed if you were expecting this Blumhouse production to be in the same mould as their more famous works, as the second episode has more in common with films from the late ’70s/early ’80s such as Alien and The Thing. Obviously, there is nothing wrong with the way the story is being told, but its deliberate pace might be too slow for some. Not for me, though, as I’m loving the way Ghoul is teasing us along the way. The first episode was very politically-minded, establishing this dystopian world, and the people at the centre of the story. This second episode, however, feels like a prelude to the inevitable showdown in the third and final part of the miniseries.

We open with the arrival of Ali Saeed, whose unassuming presence grounds this antagonist with a strange sense of believability. The team tries to make Saeed speak, but even after a beating, he refuses to answer. He is dragged to his cell, and the other prisoners berate a fellow inmate because they believe him to have snitched on Saeed’s whereabouts. Saeed is then chained and tortured, but only Nida provokes a reaction from him. He calls her “Nidu” (a nickname only her father knows), and she’s visibly shaken. Rightly so, too. Supernatural horror almost always leans far too heavily on entities that are beyond the realm of possibility, so we’re conditioned to expect Darth Maul lookalike creatures such as the Lipstick-Face Demon from the Insidious franchise. From his outer appearance at least, Saeed is just a man and not some device used to lure us in with a quick jolt of fear. Despite him looking like a normal guy, we know Saeed is more than just a man, and Nida and the soldiers soon will too. 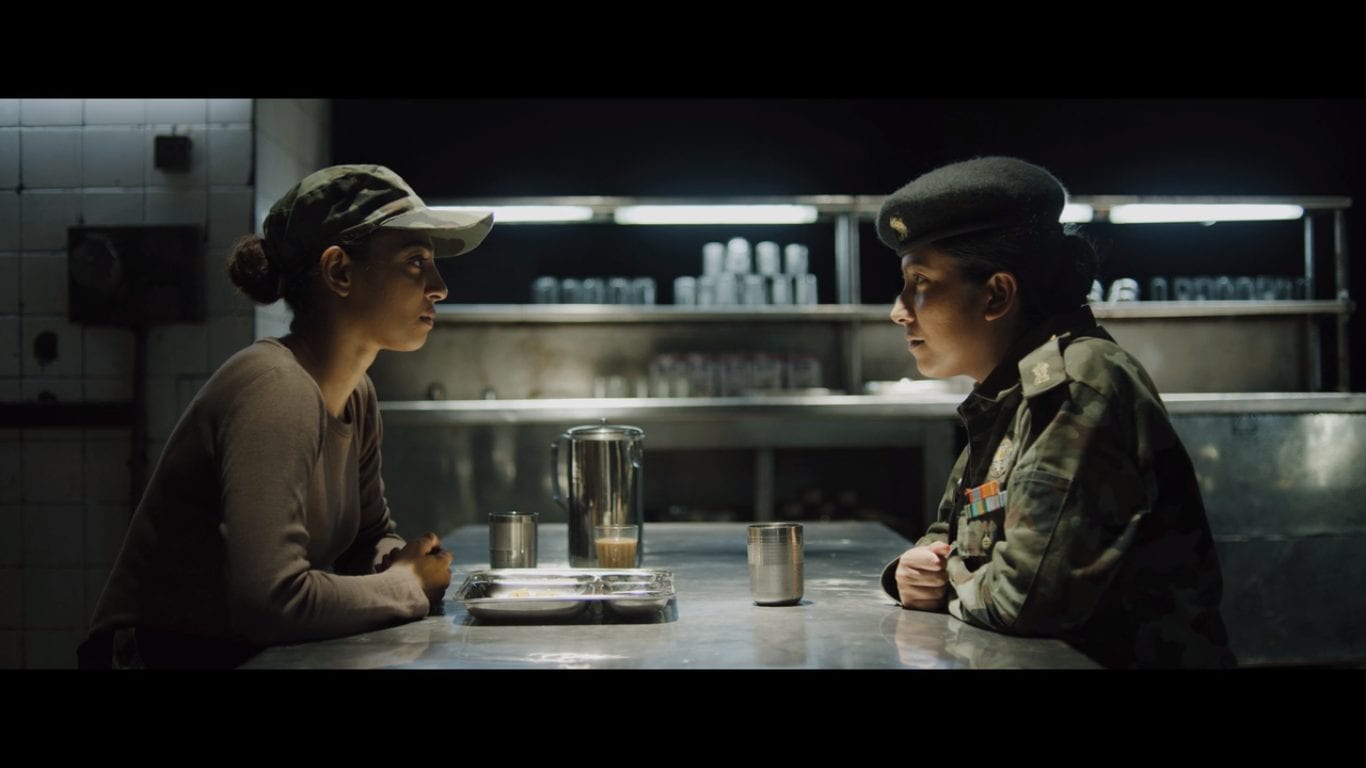 During a break from Saeed’s interrogation (which sees him exposed to incredibly warm/cold temperatures and loud music), everyone in the facility gets some rest and each has their own vividly brutal nightmares. Yes, dream sequences are clichéd, but they’re still effective when we see Nida shooting her father in the head while Saeed watches and applauds, followed by a fake out which sees Nida’s father emerge from the shadows. Jump scares aren’t particularly original and they don’t supply genuine terror or true suspense, but a well-timed shock is something to be enjoyed, right? After Nida has a conversation with the once again confrontational Major Das, she and two male interrogators restart Saeed’s questioning, and we very quickly learn that Saeed didn’t fall into their laps by coincidence. He’s playing with their minds, making the men hear things from their shared nightmare (a child crying and a woman screaming in pain), and the two men start to fight each other in anger.

Though, all of this isn’t being shown or heard on the CCTV footage, as that has frozen causing panic in those watching. One of the men, Chaudhary, stabs his partner, Gupta, in the chest and they soon realise they’ve let a demon into their playground. This is where my earlier reference to The Thing comes into play. Both Ghoul and The Thing are set in intentionally isolated locations and use that claustrophobia to their advantage. Are us humans the monsters, and not the titular Thing or Ghoul? Almost certainly, yes, which is why the monsters in horror usually critique us as a society such as the zombies from Romero’s Dead series. Just like the Thing goes around imitating people and other organisms, the eponymous Ghoul inhabits Saeed and creates havoc in various supernatural ways. Gupta is the first to go, and the Ghoul has only just begun. It is at this point that Col. Dacunha steps in, believing he can get the job done. Oh, if only he knew about the monster sitting a few feet away. 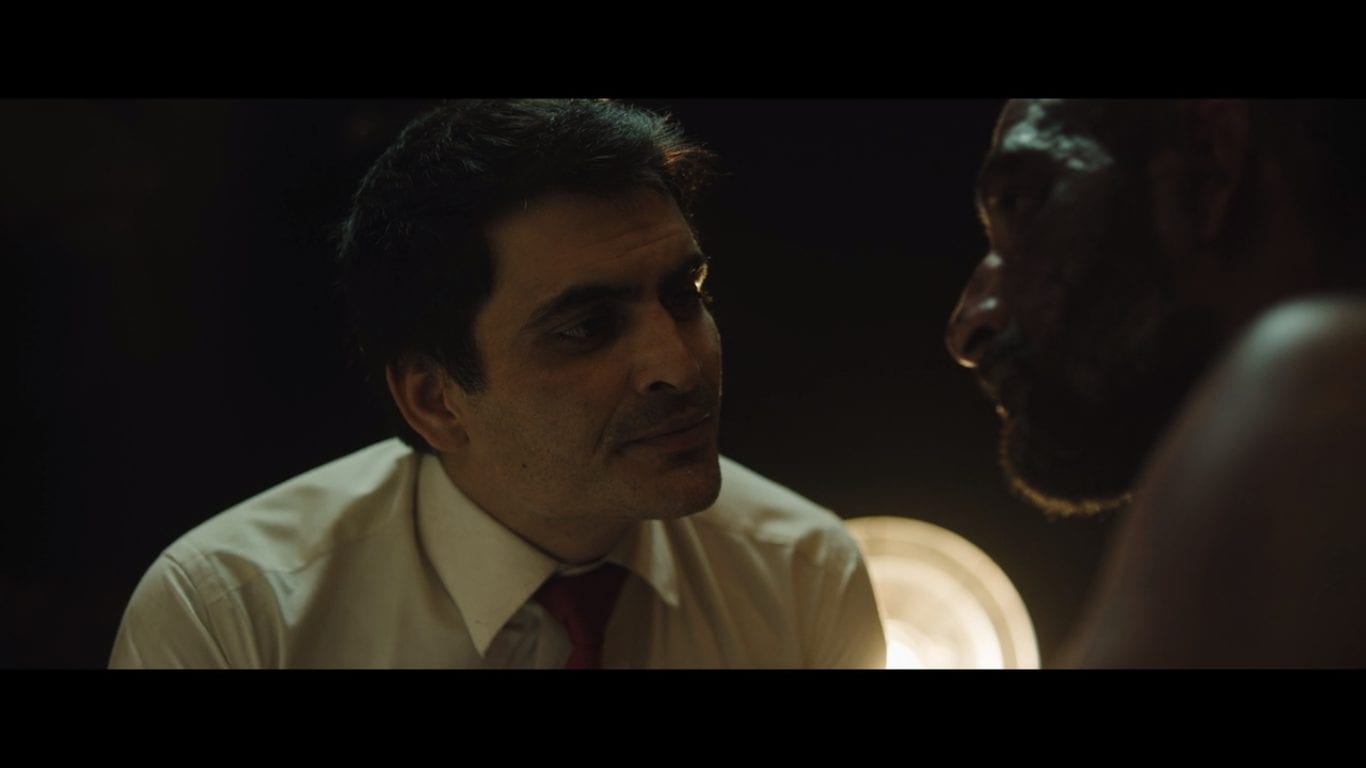 Dacunha tries to pressure Saeed by revealing his family history and threatens the life of his loved ones, but Saeed just sits there in silence. That is until he starts whispering in an unknown language, which makes Nida grab one of the inmates and he reveals Saeed is speaking ancient Aramaic. Maulvi, a cleric, has known Saeed since childhood and has no idea how he is repeating the same thing over and over, “Finish the task. Make the sinner realize his guilt and then eat his flesh.” Maulvi warns Dacunha to leave the room, but it’s too late when Saeed starts speaking in the voice of Dacunha’s wife, revealing some truths that anger his foe. Dacunha begins to electrocute Saeed, causing him to foam at the mouth, but unfortunately for Dacunha, his anger leaves us in the dark when the facilities power shortcuts. Once again, Saeed calls for Nida and she goes to investigate with only a flashlight by her side. She questions the unconscious Saeed about her name and then, like magic, he’s gone.

This is where I start to see a lot of Alien vibes in Ghoul, as it’s so much scarier to see a monster wait for its prey rather than endlessly chase after it. Like the Xenomorph, the Ghoul doesn’t have to hunt down its prey, as it’s more than happy to sit and wait for its victim to stumble into its path. In both Alien and Ghoul, the titular monsters are invited into their hunting ground by accident, which is straight up bad luck more than anything else. All the crew of the Nostromo did was investigate a distress signal (required by company policy), and that ended up with them bringing a chest-bursting alien into their home. Likewise, the powers that be in Ghoul think they’ve hit the jackpot by capturing the terrorist Ali Saeed, but little do they know they’ve got more than they bargained for. Radhika Apte, very specifically, reminds me of Sigourney Weaver as Ellen Ripley too. Hell, she’s even holding a flamethrower at one point, which instantly made me think of Ripley at various points in the franchise. 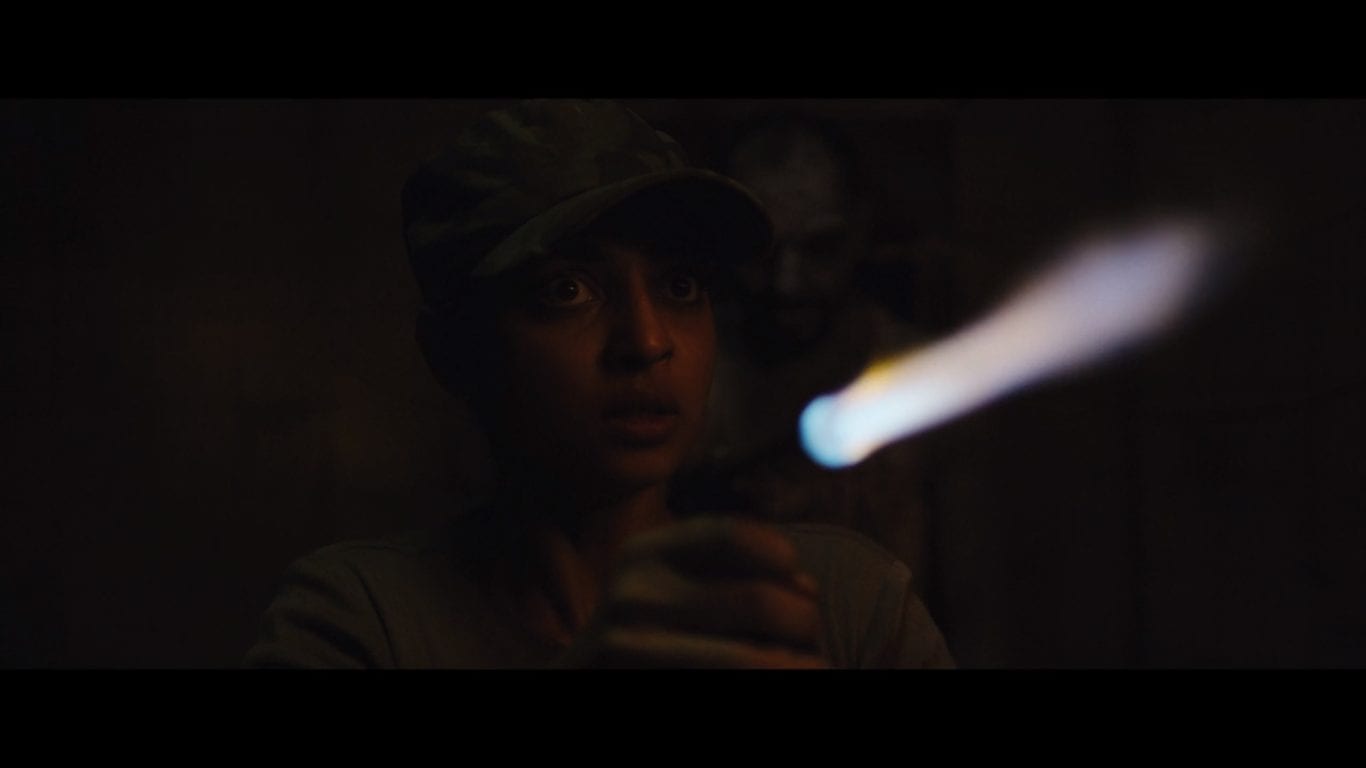 It is in the dark where Nida first sees the Ghoul inside of Saeed, which results in the biggest jump of the episode. She can see it, she can hear it, but trying to get other people to believe her is another thing (again, just like Ripley in Aliens). After the power is restored, Dacunha calls for the help of Faulad Singh (their go-to guy to break any difficult interrogation case). The final minutes of the episode see Nida and Dacunha discussing what happened between her and Saeed while they were alone, and she mentions her father after the Ghoul speaks of him. The two argue about how Saeed could possibly know everything he does, and Nida questions if Saeed had planned to be detained by them before his capture. We then see the arrival of Faulad Singh, and we once again finish on a close-up of Saeed’s face as he says, “Now let the games begin.” Oh, this is exciting. Ghoul is really ramping up to its final episode, and I love that way this part builds on the first in preparation for its inevitably bloody climax.

With one episode left we’re almost at the finish line, so do join me for the final time next week as I wrap up my coverage of this fantastic thrill ride. But before I go, let me leave you with a few questions to ponder over that I didn’t acknowledge in my main analysis. Do the NPS really only have 24 hours to interrogate Saeed or are there more secrets yet to be uncovered? Do the violent nightmares tell us more than what’s on the surface, are they a subconscious display of real-life guilt, and will those visions play into the final episode somehow? And finally, how does Saeed know Nida’s nickname, why does so much tie into the presence of her father, and why has the Ghoul taken such a liking to her? There’s a lot riding on the final episode of the show, and I’m not expecting too many of the folks at Meghdoot 31 to be able to walk out alive if Ghoul delivers on the bloodbath it has been promising. Let’s see what games the Ghoul has in store for us, shall we? I can’t imagine the soldiers having too much fun, though. 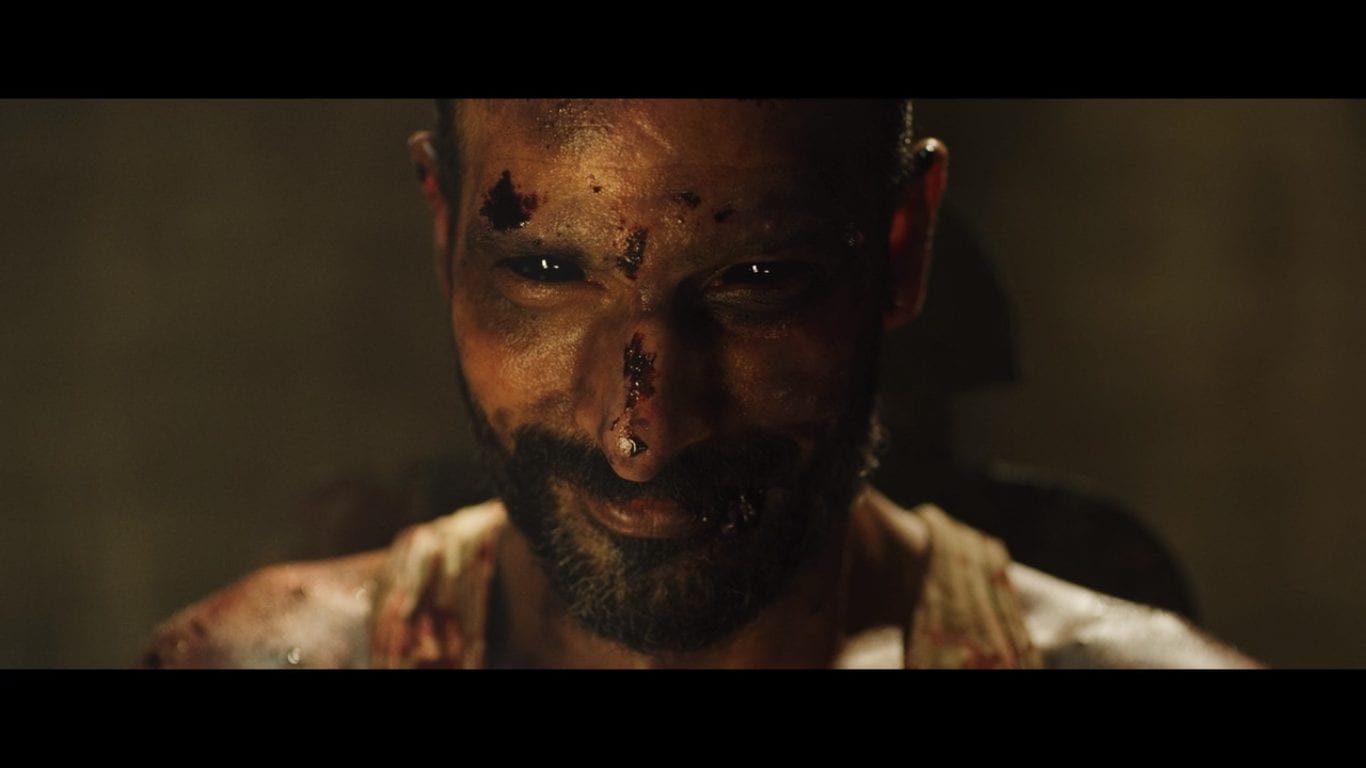 So, what are your thoughts after the second episode of Ghoul? Does it make you want to jump right into the final episode, or does its deliberate pacing and structure hinder the narrative flow? Please leave a comment and let us know by following the information about our social media accounts, which can be found below. Alternatively, you can follow me on Twitter (@JonSheasby), and we’ll continue the conversation over there.