It’s one thing calling your 18-part TV show an 18-hour movie, but can you imagine your actual movie becoming a Netflix miniseries during production? Well, Patrick Graham can because that’s exactly what happened with his new show, Ghoul. In the past few years, Netflix has really committed to producing more and more non-English-language content in both film and TV. They have recently struck gold with shows like Dark, the German-language sci-fi thriller; The Rain, a Danish post-apocalyptic drama; and their first Netflix Original from India, Sacred Games (also starring Ghoul’s Radhika Apte). I swear, we literally would have got an 18-hour movie if Netflix had produced Twin Peaks: The Return. There would have been credits at the beginning of hour one, credits at the end of hour 18, and no breaks or pauses in between. For the record, I don’t buy into The Return being an 18-hour movie. Ghoul, however, is definitely a three-part TV show and not a film as originally intended.

Ghoul is Netflix’s second Indian show thus far, and with it comes Blumhouse Productions’ very own Jason Blum, who serves as an executive producer on the series. Obviously, Blum’s name has become a sign of quality that piques the interest of any horror fan, which hopefully signals good things are ahead, right? Well, I’ll save that for later. First, let’s look at how Ghoul became a three-part horror-thriller almost two years after filming began. Writer-director Patrick Graham began principal photography on Ghoul in 2016, two years after Blumhouse Productions, Phantom Films, and Ivanhoe Pictures came together to create a slate of genre movies set in India. While that three-way partnership still continues, Netflix came on-board in February 2018 and Ghoul became what can now be viewed in over 190 countries around the world. This isn’t the all too often predictable story of how a major studio butchered a film, though, as Graham was more than happy with Ghoul’s acquisition by Netflix. 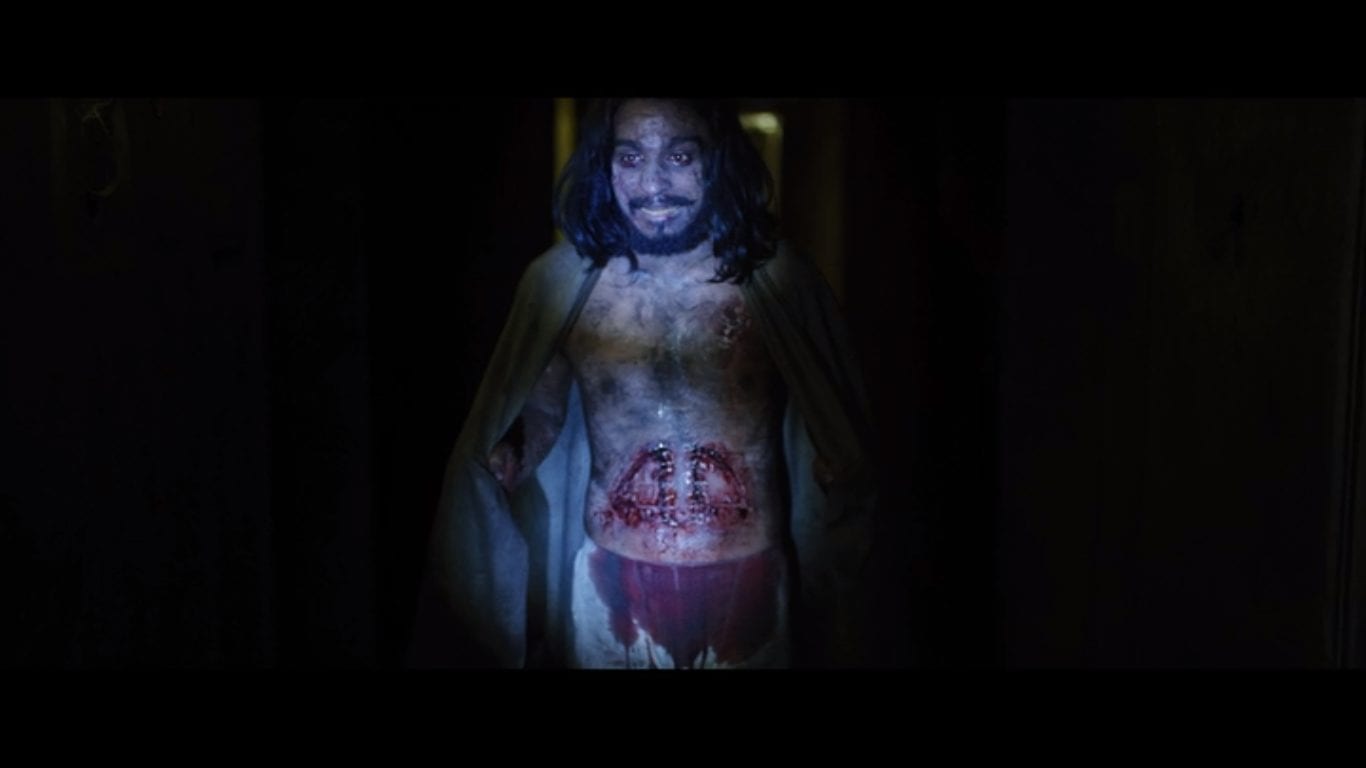 Based on the Arab folklore monster, the idea for Ghoul came to Graham in a dream and he then developed it as a movie script. But after production began on Ghoul—then intended to be a film—Graham felt he needed more screen time to do his story justice, and this is when Netflix came in and saved the day. More backstory was added, characters were fleshed out, and Graham was happy to be given extra time to let the story breathe. Graham originally wrote the screenplay in English and later had the dialogue translated to Hindi, which is a common practice in the industry (e.g. Quentin Tarantino simply had to trust his words were being translated correctly during the production of Inglourious Basterds, as he was basically none the wiser). Obviously, this caused a problem or two for Graham during Ghoul’s production (the crew was mainly composed of Hindi speakers), but careful prep and rehearsals went into making sure everything went according to plan. And it did, thankfully.

“The near future. The country has changed. Sectarian violence has reached crisis point. Secret detention centres are established. A military clampdown is in effect.” Right from the get-go, Ghoul lets us know the type of show it’s going to be. A whispering man cuts himself and presents a blood offering to something. The military searches a suspected terrorist safe house and finds a long-haired man with red eyes and cuts all over his chest. “Everyone is dead,” says the man, who points them in the direction of the person they’ve been tasked to capture. His name is Ali Saeed (Mahesh Balraj) and he’s surrounded by many dead bodies. He whispers into the ear of the captain and we fade to black, cutting to one month before these events. It’s a suspenseful start to the show, for sure; as the lights continuously flicker, causing a sense of unease, the string/percussion-heavy score increases in tempo and volume throughout, and things stay out of focus long enough for us to question what we’re seeing. 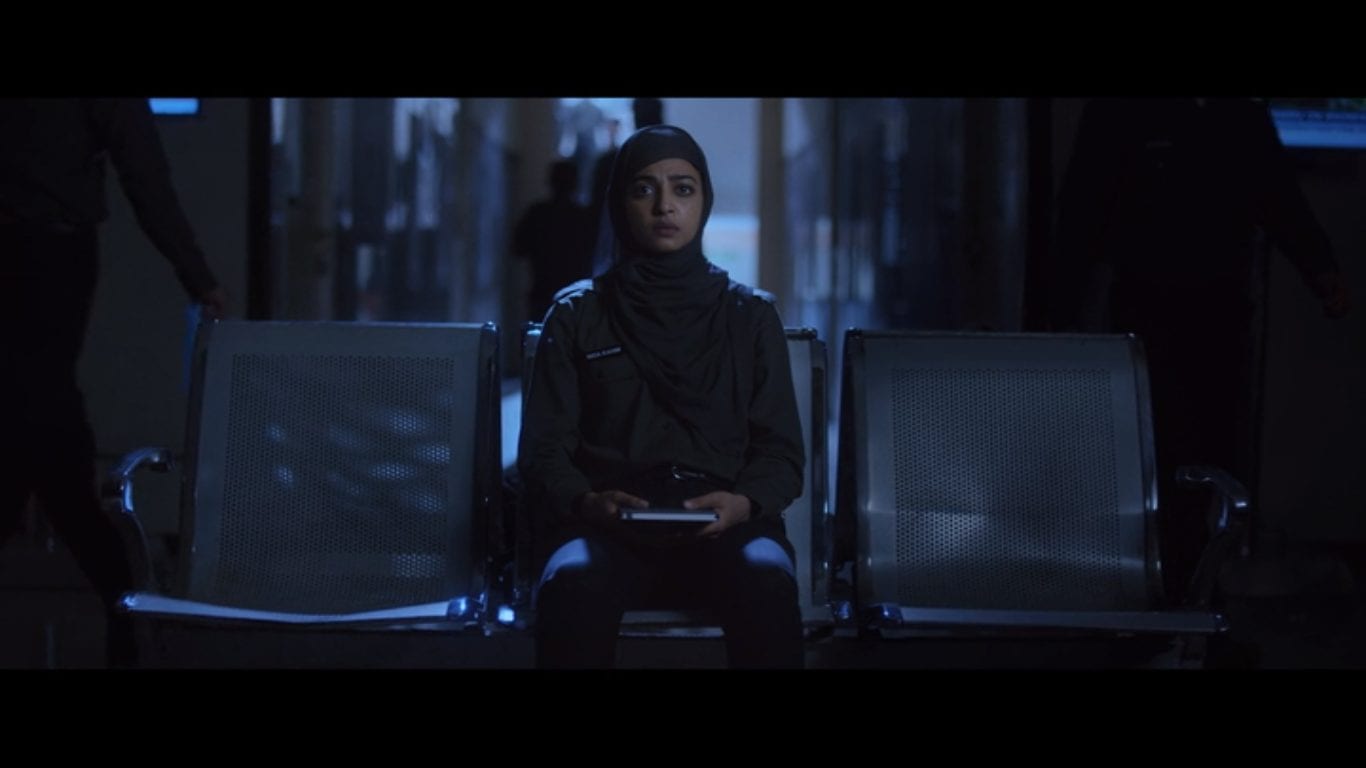 But for the rest of the episode, there’s barely any horror on show. In fact, you’d be surprised you were watching a horror miniseries at all. Ghoul is the type of show that wears its politics on its sleeve. There are no hidden messages, no subtle hints of satire. Instead, the political landscape is a hugely important part of Ghoul and it plays into the introduction of our lead, Nida Rahim (Radhika Apte), and her father. This future dystopian version of India is in turmoil, terrorism is at an all-time high, and everyday normal people are paying for the sins of others. People are oppressed, angry, and fearful of the way the country has created the National Protection Squad to control terrorism; both women and men have had their rights taken away, and even owning a certain type of book can be considered an anti-government stance. Like The Handmaid’s Tale, the world of Ghoul feels like a once-unimaginable place that’s now all too imaginable if we turn the dial of sanity a few degrees in the wrong direction.

Nida, a recent NPS recruit, fully believes in the actions overseen by the government. Her father, Shahnawaz Rahim (S. M. Zaheer), is wholly against their authoritarian regime. Innocent people were thrown out of their homes and segregated into supposedly safer areas where they would undergo reconditioning to cleanse them. Their possessions were taken and burned for being sacrilegious, and universities and schools were closed, taking away anyone’s right to an education. Again, like The Handmaid’s Tale, Ghoul is commenting on the parallels between this heightened fictional world and our real world, which often feels so insane that it makes House of Cards look like a documentary. I believe Patrick Graham is also voicing a broader social commentary on the way a portion of society sees anyone with religious beliefs—not just those largely practised in Asian countries—as bad or evil or capable of terrorist activities. (Watch Who Is America? to see these morons in action.) 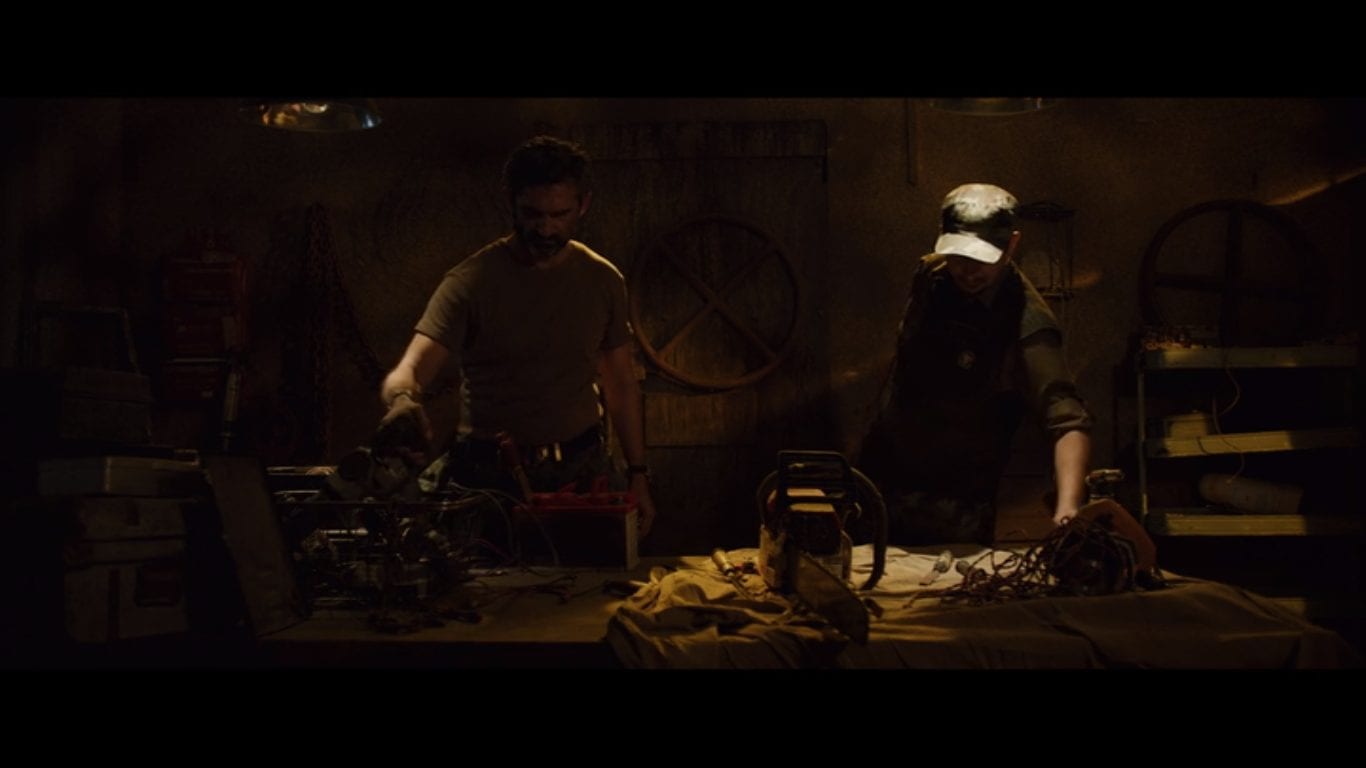 Anyone is capable of being good or bad, and that’s the truth. We make that decision, so to blame an entire belief system is utter lunacy (it might win you the presidency of the United States of America, though). While driving Nida back to the academy, Shahnawaz is stopped roadside and immediately fears for his safety because of the outlawed books and non-syllabus lecture notes in his possession. Luckily, Nida manages to bypass the inspection thanks to her credentials in the NPS Advanced Interrogation unit. Though Shahnawaz cannot rest easy for long, as Nida later reports him for being a threat to public safety. Is Nida being brainwashed into believing what the government is doing is right, or does she believe that this is the only way to achieve a better future for herself and the country? It’s hard to say, but her loyalty to the government cannot be questioned when she’s willing to have her own father locked away and held in a detention facility to undergo reconditioning.

We cut back to present day and a blindfolded Nida is being transported to Meghdoot 31, an advanced interrogation centre, which will see the arrival of the terrorist Ali Saeed later that day. Upon her arrival, she meets her co-workers (one of whom questions her religion) and is introduced to the facility and the way everything works. Classical music plays constantly, windows are blacked out, and clocks are removed to prevent anyone from knowing the time. Ghoul is a show that revels in the shadows. It’s murky, damp, and suffocatingly oppressive in both its setting and tone. Characters aren’t to be trusted, information isn’t to be trusted, and everyone has their own agenda. Nida—excellently portrayed by vulnerable-yet-tough Apte—then meets with Colonel Sunil Dacunha (Manav Kaul), who praises her effort and bravery for handing over her father. She’s told she will be the one interrogating Ali Saeed, despite Lieutenant Laxmi Das (Ratnabali Bhattacharjee) being suspicious and having no trust in Nida. 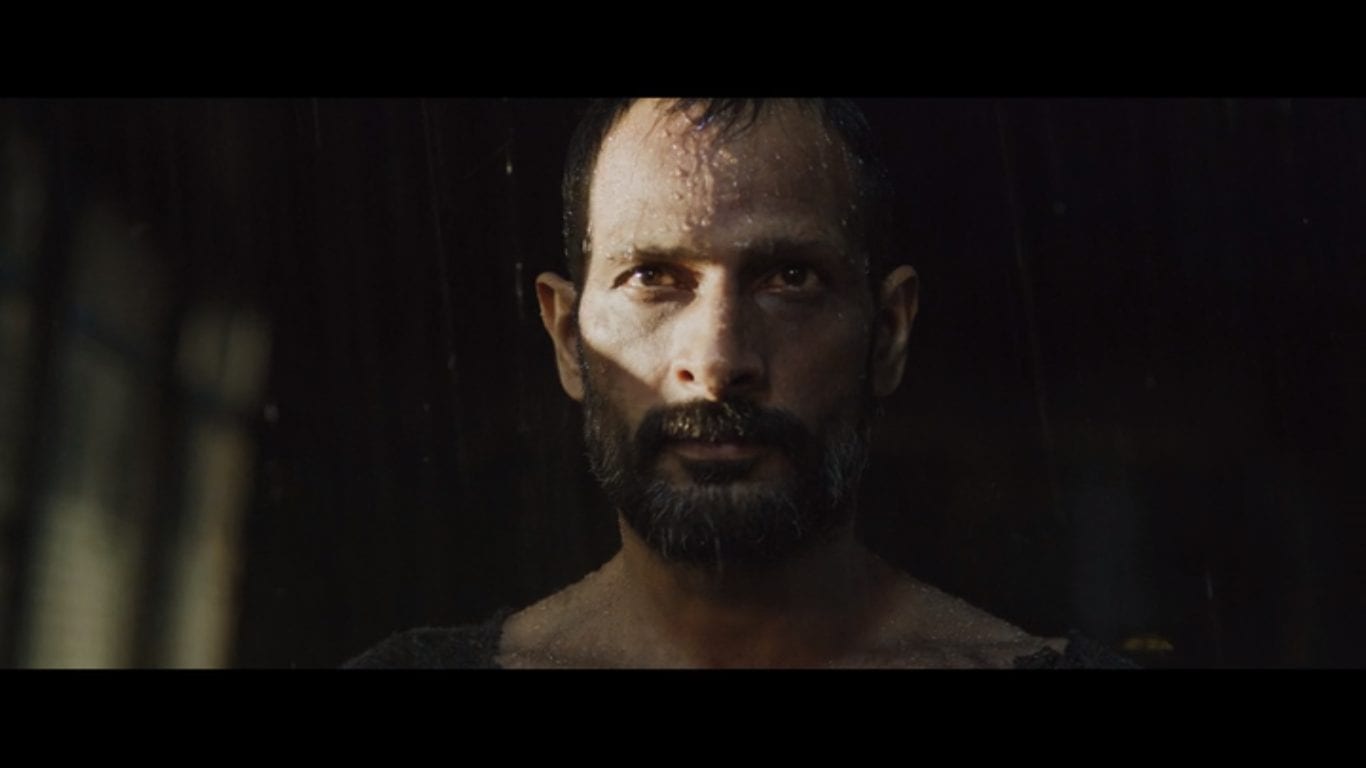 We then see two interrogators arguing about the innocence of a prisoner, which once again thematically draws on the duality of the show. Who is right or wrong? Good or bad? One believes the prisoner might be innocent and is saying nothing because he simply has nothing to say, while the other is certain he’s a guilty monster who should be pushed even further. The first episode ends as the staff wait outside for the arrival of Ali Saeed, while the prisoners question his potential entrance. The rain is pouring, dogs are barking, and Ali Saeed steps out of the vehicle. We finish on a close-up of his face, as the dogs stop howling and we cut to black. Personally, I was very happy after the first episode of Ghoul. It looks like a TV show, it’s structured and moves like a TV show, and any worries of it feeling padded out or unnecessarily long were quickly eradicated. But there are still two more episodes to go and I’ll be covering those very soon. Hopefully, they will live up to the promise of this opening part.

Looking for more on Ghoul? We’ve got you:

Ghoul: A Netflix Original Miniseries – “The Nightmares Will Begin”

So, how do you feel about the first episode of Ghoul? Did it leave you craving more, or does it already feel like a standalone movie stretched out to the length of a miniseries? Please leave a comment and let us know by following our social media accounts, which can be found below. Alternatively, you can follow me on Twitter (@JonSheasby), and we’ll continue the conversation over there.