One of the best parts of covering film festivals is the anticipation of the films running the circuit that get tons of insanely good press. I have been hearing nothing but praise in regard to PussyCake. With a title like that it is pretty difficult not to be pumped for whatever the hell it is going to be. After viewing this film, I was beyond happy it lived up to the hype. What starts out as a struggle for relevancy for an all-female rock band quickly turns into a struggle for survival—not just for the band, but for the world. While the surface of the film provides amazing visuals, there is much more under the surface to gnaw on and really think about for days to come.

It’s rare for a zombie film to take the idea of what zombies can be and reinvent the idea. What we know as “zombies” comes under the gun, giving us a new canon for how zombies can be portrayed on screen. PussyCake is far from a typical zombie film; rather, it’s a vomit-filled alien zombie hybrid flick that will disgust and rivet audiences. There are many films that try and go out of their way to be midnight movies. Usually, the effort is fruitless and feels too try-hard; this is not that film. PussyCake is a truly authentic midnight movie, feeling like an evil mix of Evil Dead, Psycho Goreman, and The Green Room.

PussyCake starts with a kid doing research into his scientist father’s disappearance (this will come in handy later on). From there we get a hard cut to the band, PussyCake, finishing a show. We have our main players: Elle Cake (Maca Suarez), Sara Cake (Aldana Ruberto), Juli Cake (Sofia Rossi), Sofi Cake (Anahi Politi), and their manager Pato (Flor Moreno). After their show is over Pato tries to get her ex-partner Simon (Amanda Nara) to respond to her message about a second show, while the Cakes do heaps of drugs. With a show looming on the horizon for the band, and their attempt at relevancy, they hit the road in their van. Once their van breaks down in the town where the show is, they are trapped there. What lays dormant in town is worse than a bad review from Anthony Fantano: death.

One of the most visually appealing moments is after the van breaks down and the girls find the venue closed, Juli takes acid and goes for a walk on the beach. What she finds on the beach, which has been done to other effects in worse films, is something so visually intriguing it stuck with me. I don’t even think the point of said beach shot was meant to have that level of effect, but the simplicity of it all really hit me deep. What Juli sees on the beach contributes to a story point later in the film, the way they handle this piece of world-building is spectacular. There is no discussing why what is happening on the beach is happening, you are simply given the perfect amount of context clues to understand it. While there is a lot that goes on in this movie, nothing is overwritten and it all perfectly makes sense in the grand scheme of everything. That’s some damn good sci-fi. 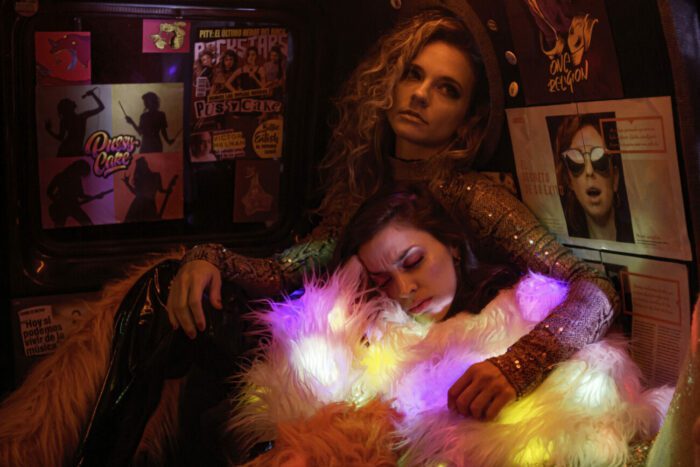 This is the first film I have seen from Argentinian director Pablo Parés, which is a crying shame. The visuals he was able to produce from Maxi Ferzzola’s script, with story credits to Pablo Parés, Hernán Moyano, and Hernán Sáez, shows the amount of competency Parés has with both screen direction and character direction. Plus for this being Maxi Ferzzola’s first credited screenplay on IMDb, that just adds to the whole veil of impressiveness. The way this screenplay blends the experimental sci-fi ideas with the insanely disgusting cosmic horror really sets it apart from the typical sci-fi horrors that have been churned out recently. Rather than having the “invaders” as one cohesive group, the cat and mouse game between the “invaders” really adds a whole other level of flair to the story.

Who knew that vomit zombies were going to be my new fear?

I would be remiss if I did not take the time to talk about two specific things: the outfits and the practical effects. First, the costume design for this is absolutely spectacular. It’s really fun to see this rock band take on a zombie apocalypse in their stage clothes. The practicals are also top notch. One of the biggest difficulties when deciding to make your practicals heavy film take place during the day time is how everything looks. When basked under the moonlight you can take a little more liberty with your effects, and that’s fine. PussyCake takes these brilliant creature and makeup designs and forces them out into the harsh sunlight. I personally love when horror bleeds into the daytime, it gives it a more authentic and disorienting feel. 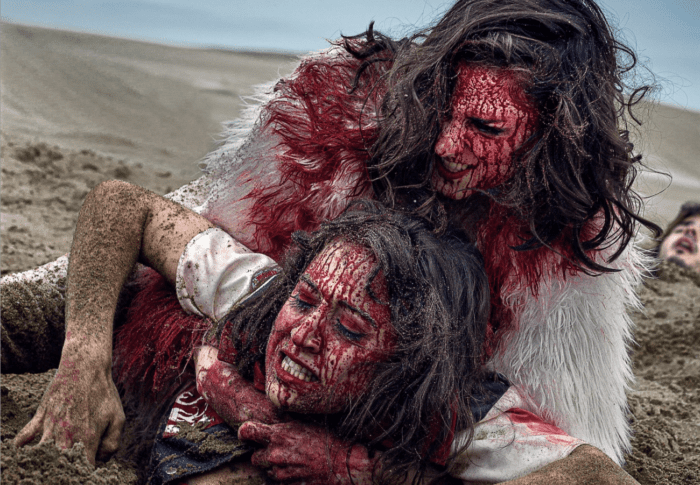 PussyCake is an in your face midnight movie, set in the daytime, that is covered in vomit, blood, and energy. Even the slower moments of character development are engaging and fun. It will be interesting to see the audience reaction to this film, I have a good feeling this is going a major hit with audiences. Oh, and don’t miss the post-credit scene! This film will make the perfect addition to any Halloween movie marathon. Thankfully you will be able to view this film way before October even hits, as PussyCake will be available On Demand and streaming on Screambox on August 30th.