Alexis Bruchon’s first film The Woman with Leopard Shoes was one of those 2020 titles which really stood out for me, for its wit, originality, and tension, so I was very happy to hear Bruchon had another film at this year’s FrightFest. Like his debut, The Eyes Below AKA Les Yeux Dessous is set in one location, has no spoken dialogue, and is focused on just one character. This one is rich with colour though, and quite different in tone. I’ll try to stop comparing now…

The colour is one of the first aspects that drew me in, actually, and it is no surprise to discover Bruchon is an artist by nature. The Eyes Below is full of vibrant—almost autumnal—shades of orange, brown, and gold, despite it taking place almost exclusively at night-time. Some of that comes from a huge open log fire, sure, but the colours imbue the film so much that I almost held my hands out to the screen. It was partly in the bed linen too, the first image which appears on the screen, so as I saw the pillow being arranged, I felt welcome and ready to snuggle up, just like the protagonist.

This is Eugène (Vinicius Coelho), a man we know little about (at least at first) except that he’s ready for bed. As the tale starts to develop, it becomes apparent that his work has been heavy lately, and his rest is important right now, as he’s going to wrap up a major assignment in the morning. Understandably, he’s understandably feeling the strain; so when he starts to sense someone watching him, creeping up on him, nay, right onto him…is it simply the pressure that disturbs his sleep, or is someone really there?

For the audience, The Eyes Below is all about the mood: sometimes you might desperately need sleep, but the more you need it, the more it eludes you. If you recognise that feeling, you will see yourself in poor Eugène. Maybe you know what it’s like: irritating at first, then steadily more maddening or perhaps distressing the more sleep-deprived you become. Your mind can play tricks on you, making your familiar surroundings seem quite different. Writer-director Alexis Bruchon plays with this fluidity of time, space, and the senses. If his Eugène can’t tell what’s real after a while, why should we? Is this a dream he sees, a half-asleep vision, or an actual intruder growing careless about being observed? 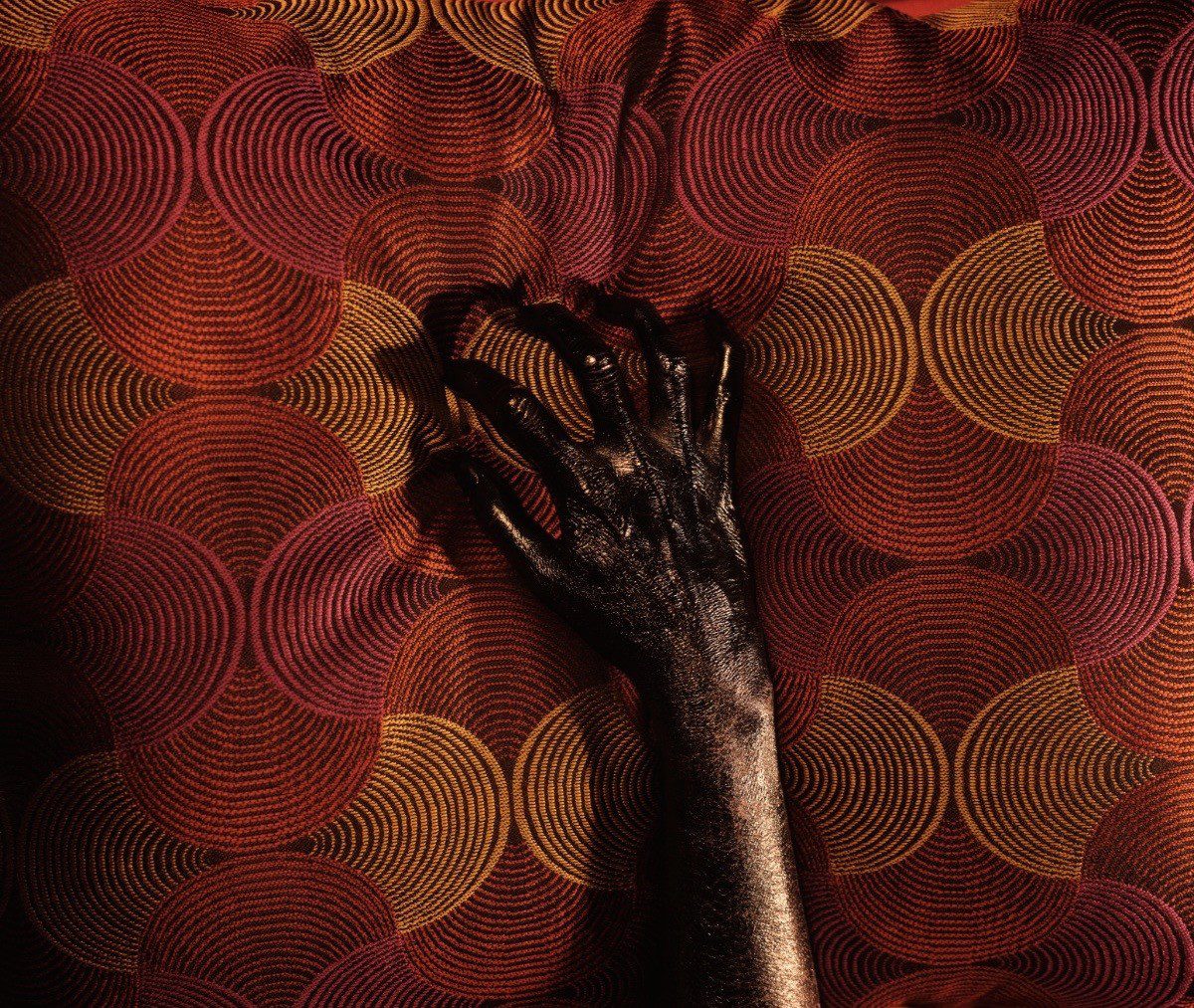 This could be called a psychological horror, then, but The Eyes Below is creepy and fantastical in tone, rather than scary. The score (also courtesy of Bruchon) adds to that, and reflects Eugène’s changing emotional state throughout the whole film. It’s laid back and inviting at first; later, it’s chaotic and frantic, while he tries to escape whatever it is that’s keeping him from sleep. It may sound like a fairly simple subject, but that’s essentially what The Eyes Below is about: how an individual can be driven round the bend (drive himself round it, perhaps) by his failure to sleep.

The main focus of our attention is all on Vinicius Coelho in his portrayal of Eugène, a responsibility he carries with energy—sometimes a little too much energy, I think, for someone so sleepy. However, when the embodiment of his anxiety (played by Pauline Morel) appears, he seems to have much more balance; or perhaps the energy simply feels more reasonable. I say little about her performance, except that it is suitably unsubtle in a surreal way, and it works very well, keeping the viewer guessing about what is going on in Eugène’s head or in his room.

Meanwhile, Bruchon carries more roles than these two performers behind the camera: writer, director, producer, cinematographer, editor, composer and sound designer…just like in The Woman with Leopard Shoes, the young filmmaker is an auteur again. I get the impression that from his point of view, The Eyes Below is not so much about the mood, but about the minimalist approach with which to create that mood. He chose one central character and one simple, familiar location and made the most of both, without any spoken words. The scope of such a simple set was stretched by seeing it from every possible angle—under the covers, under the mattress—and this was made possible with specially built equipment. It is an admirable effort indeed, and I confess I watched with the question at the front of my mind all the time: what else can he possibly do here? 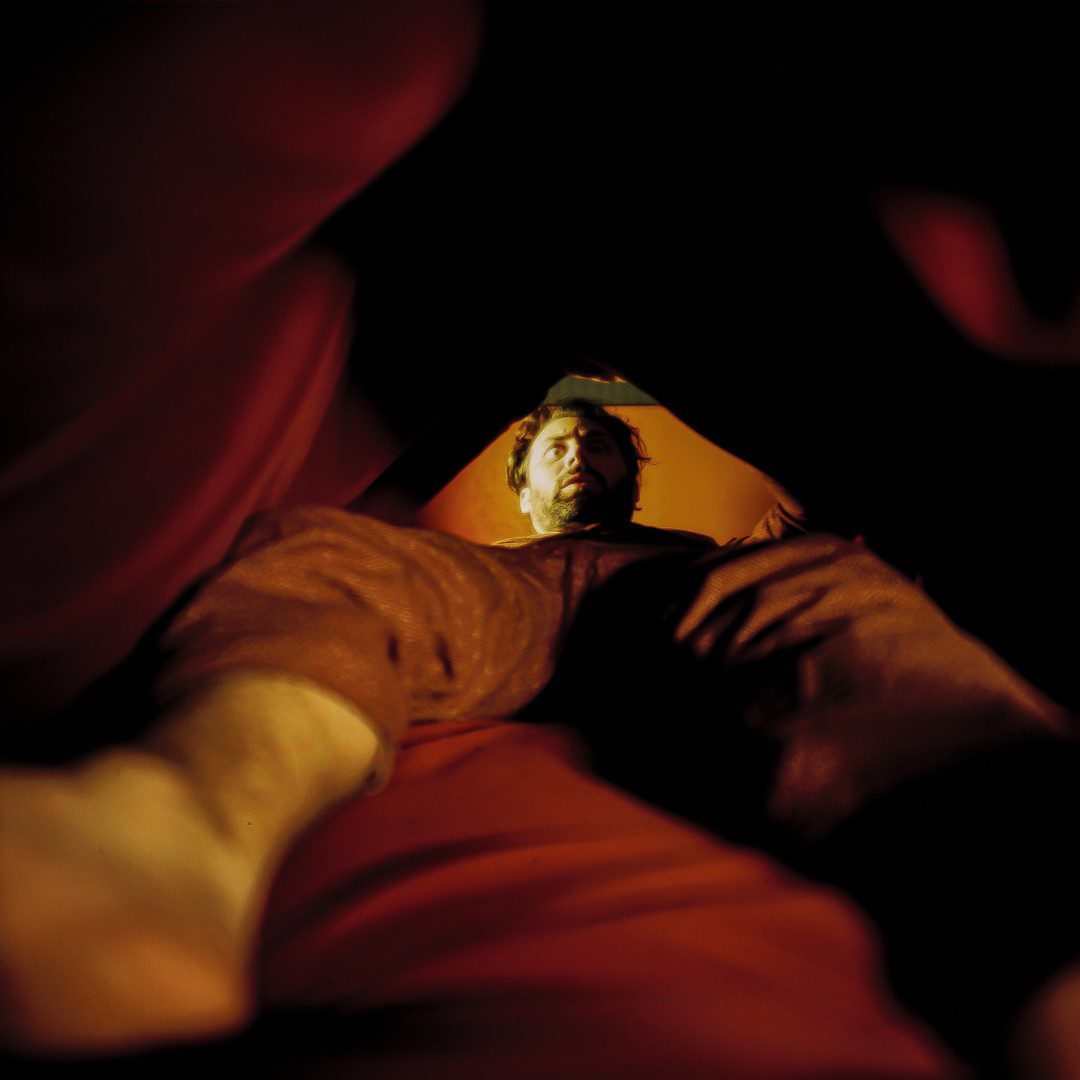 And there lay a couple of snags with the film: the scope of the set was clearly used well, but the story with such a small space and cast is plainly finite. How far can one person try to evade an intruder (whether real or imaginary), while not leaving his room? Towards the end, I couldn’t help feeling one or two scenes were played again (or at least very similar) to extend the run time. There was another issue, for me at least, having seen Bruchon’s first film: having applied some of the same creative challenges, the originality which made Leopard Shoes sing out was naturally no longer present the second time.

Still, applying those challenges to a film of a different genre tone was an interesting exercise, and an intriguing experience as a viewer. According to the press pack, The Eyes Below is the central film in a “project of three films about thriller,” and from what I read, the tension is ramping up. The third film, Point de fuite, is currently in pre-production and is described as a “paranoiac thriller.” I understand this one is going to be somewhat bigger too. How intriguing…I can’t wait!

The Eyes Below had its world premiere at Fantaspoa Film Festival in Brazil, April 2022, and now arrives at Arrow Video FrightFest for its UK premiere on 26 August.