American Horror Story has always been sort of hit or miss for me. With the exception of Murder House and Roanoke, I don’t think I have ever finished a season. It usually, for me, seems to be chock full of filler to pad out the time for the next scare, and it feels disingenuous. Obviously, Ryan Murphy and Brad Falchuk have a specific talent for creating engaging and interesting television, but the majority of their AHS seasons miss the mark for me and feel too drawn out. When I heard they were creating an off-shoot anthology series, American Horror Stories, I was intrigued. The creators would be forced to tell a cohesive story, which they excel in, in a shorter amount of time; this means more scares with less filler. I checked out Season 1 and enjoyed the majority of it. Yes, I even enjoyed Episode 4, “The Naughty List,” don’t even come after me on that one. So with Season 2 of American Horror Stories, I was already on board. So, let’s take a look at it.

Set in 1961 Natchez, Mississippi, the overly qualified Coby Dellum (Kristine Froseth) goes to the Van Wirt Toy Company to interview for a secretary position. After a wax melting and doll creation montage, the enigmatic Mr. Van Wirt (Denis O’Hare) gives a minute history on the story of dolls, and how they represent perfection. Mr. Van Wirt then tells Coby she is, basically, too good for the position she is applying for and asks her to leave. Coby melancholically gets up to leave the interview, thinking she was perfect for the position, but before she can leave the room Eustace (Matt Lasky) chloroforms her, knocking her out.

Coby wakes up surrounded by dolls in a human-sized dollhouse, as Mr. Van Wirt tells her she will be confined to this house for “the next seven days…give or take.” This ambiguous statement would go on to prove the truly insidious nature of her capture, and is undermined by the horrific ambiguity of being told she was entered into, “the pageant.” Once Coby notices the windows are barred over, and the house is full of other human dolls, she realizes the horror of her situation. The other human dolls inform Coby that she is indeed trapped here and that Mr. Van Wirt killed his former wife after he caught her cheating on him; he threw her down a well and let her perish. 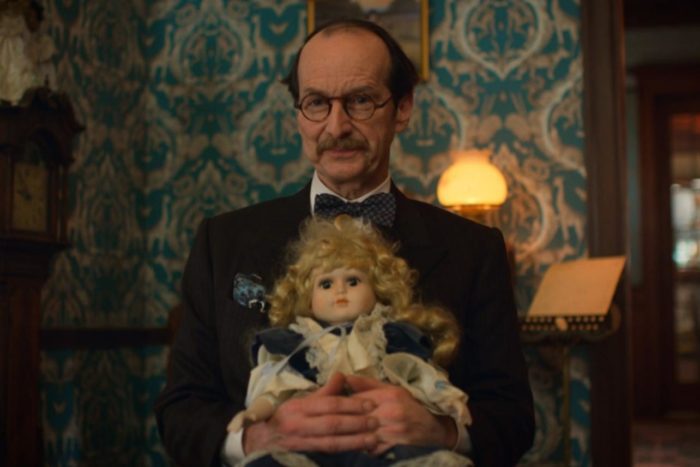 All of a sudden, a bell rings, and Coby is told to find a costume, where she picks a clown costume. Mr. Van Wirt, Eustace, and Otis (Houston Towe) enter the dollhouse, and Mr. Van Wirt tells Otis to have fun with his toys. We find out after Otis tells Coby to entertain him that Coby has magical powers when she makes a toy truck move on its own. Twice in a row. Aurelia (Abby Corrigan) is already infuriated, since Coby joined so late, and now thinks Coby is trying to win her way through the competition by getting Otis on her side.

It’s time for the first test! Mr. Van Wirt makes the dolls properly set up a table for a meal that doesn’t even sound remotely enjoyable; though any meal with Mr. Van Wirt would not be enjoyable. Despite Coby’s overqualification for the secretary position, she is underprepared for how to set up this overly complicated [fictional] meal. Coby tries copying the setup of Aurelia, but she decides to play some harsh tactics and sets up an incorrect setting, before fixing it seconds before the timer is up. Coby, thankfully, makes it through, but Faye (Maryssa Menendez) gets thrown down the well.

Perturbed by what happened to Faye, Coby starts working harder on her relationship with Otis with the hopes that it would help her in the long run. Oh boy, was she right (in the worst way possible). The second test is to see how well the dolls can recreate a lavender ironing spray, on top of if they can iron a shirt and fold, not crease, it properly. Coby burns the shirt and Mr. Van Wirt ends up ironing her hand, leaving her with a gigantic burn. Though Coby doesn’t do well in the test, she doesn’t lose. Who does lose? Bonnie (Emily Morales-Cabrera). Rather than getting burned, Bonnie gets multiple stomach wounds from Eustace and a large knife. 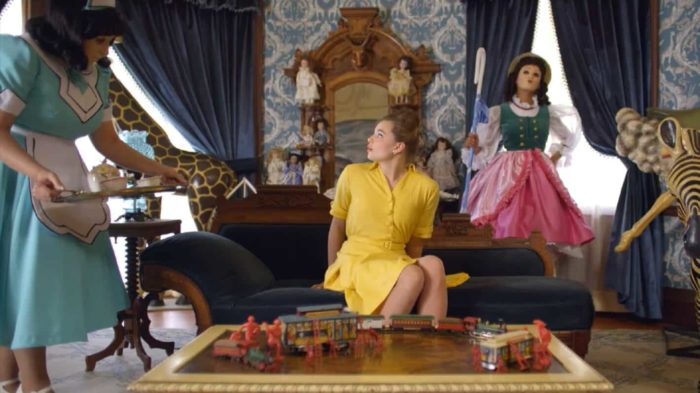 At this point the remaining dolls, Coy, Aurelia, and Harlene (Simone Recasner) hatch an escape plan, and this is after Aurelia tries to kill Coby. Mr. Van Wirt and Eustace come to the dollhouse for the final test, but the dolls have set up mannequins in their outfits and make their escape. Aurelia and Harlene are ready to make their escape, but Coby refuses to leave without Otis. Once they part ways, Coby goes into Mr. Van Wirt’s mansion and finds Otis playing with toys. It seems like Otis is ready to go with Coby, but in a twist of events, he uses a cattle prod to shock Coby, knocking her out.

Coby wakes up strapped down to a giant doll-making machine where she gets covered in wax; this creates the human doll/wife Mr. Van Wirt has always wanted. Just when it seems that all hope is lost, Mr. Van Wirt’s tea cup flies into the air and smashes into the ceiling. This is when two witches enter the house and reveal that Coby is a witch. Coby makes her escape with Otis to the school from Coven in American Horror Story Season 3. She changes Otis’ name to Spalding (who is played by Dennis O’Hare in Coven), and they meet a young Myrtle (Ellie Grace Pomeroy).

Jaslyn Taylor (Gabourey Sidibe) browses the aisles at a store when she notices an Aura home security system on sale, though $200 is still pretty steep. She ends up buying the security system, with the help of a customer pretty much telling her she’d be murdered without one, even though it is out of her budget. Jaslyn’s partner Bryce (Max Greenfield) is initially pretty peeved with the unauthorized budget deviation, but he loves her and understands the circumstances of her past; his stance is understandable, though, as they live in a gated community with a Home Owners Association [ominous music].

They set up their new security system and almost have an A History of Violence moment on the staircase, but Bryce has to leave for a work meeting. Jaslyn goes back to her online jewelry sales, only to be interrupted by her phone. A notification from her Aura shows there is a very old and VERY creepy man on the front porch, asking to come inside. Jaslyn calls the cops and Bryce rushes home. Their neighbor Hwan (Vince Yap) has a security system that points towards the front door of Jaslyn and Bryce’s house, though it shows no one at their front door at any point in the night. Not too much later, Jaslyn gets another notification on her phone that there is movement at the door. This time Bryce can’t deny it. Bryce tells Jaslyn to google “Aura pranks” and passes it off as nothing more than a basement dweller hacking their Aura.

The next morning, Jaslyn does just that, googles “Aura pranks,” which is when she has an epiphany. Jaslyn knows the man in the camera… it’s her janitor from high school Dayle Hendricks (Joel Swetow). We learn that Jaslyn and her friends used to pick on him, with Jaslyn being overtly nice to him, as a yak. This, in turn, led to Mr. Hendricks becoming infatuated with Jaslyn, leaving her candy, polishing her desk, and leaving love notes in her school books.

Jaslyn ends up taking a trip out to Mr. Hendrick’s sister’s (Nancy Linehan Charles) house, asking if she had seen him at any point. Dayle’s Sister, yes that is how she is credited, says she hasn’t seen him in a while and points out that he is obsessed with computers. This ends up being a false lead since the people in the doorbell cams are actual ghosts. Jaslyn finds this out when she gets back home, and Mr. Hendricks knocks on the door moments after. Jaslyn opens the door to let Mr. Hendricks in, but there is no one there. Once the door is closed Mr. Hendricks appears in the kitchen, frightening us and Jaslyn.

The two end up having a conversation where Mr. Hendricks says all he wanted to do was apologize, and Jaslyn says that she also wanted to apologize. At that point, Mr. Hendricks bleeds from his eyes and disintegrates. While freaked out by the series of events, Jaslyn feels somewhat relieved that not only is her ghost doorbell taken care of, but she feels an emotional release from her and Hendircks’ mutual apology. Jaslyn assures Bryce that their ghost doorbell problem is over, and they are ready to go on with their lives. Though no good deed goes unpunished. 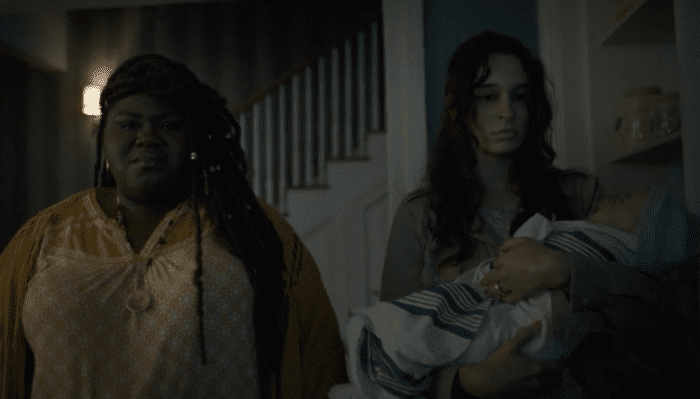 Soon after these events Jaslyn’s phone dings. There is a woman, Mary Jeane Burkett (Lily Rohren), at the door. Bryce’s reaction is tenfold compared to Mr. Hendricks’ appearance, where he loses his shit and screams at the phone. Jaslyn does research about Mary Jeane and finds out she was killed in a drunk driving hit and run years ago, which leads her, the next morning, to the park where Mary Jeane was killed. Once back home from the park Jaslyn shows Bryce a video of how the Aura camera basically acts as an EMF detector, in a video from a TechVid-er (YouTuber), Tech Reviewer (Sam Bixby). This is when Mary Jeane knocks on the door again.

Jaslyn ends up letting Mary Jeane into the house, knowing that the ghosts are here for a specific purpose, and Mary Jeane is not here for her. Bryce breaks down, once Mary Jeane is inside, and spills all the beans. Mary Jeane was his fiancé, but she died after being hit by a drunk driver when she and Bryce got into an argument. Though, that wasn’t the full truth. It turns out Mary Jeane was pregnant and that didn’t fit in with his plan. What actually happened was they got into an argument and Mary Jeane stormed out of the car, with Bryce following. Mary Jeane is almost instantly hit by a car but does not die. Bryce stalks over to her twitching body and puts his foot on her neck and snaps it.

This revelation freaks and pisses Jaslyn off, just as Bryce walks towards the fireplace to grab a fireplace stoker. Bryce tells Jaslyn that she is now no longer part of his plan, but Mary Jeane somehow kills Bryce and makes his body disintegrate, just like Mr. Hendricks. Cut to three months later, and Jaslyn lives in an apartment building. The building super is leaving the apartment after doing some work and tells Jaslyn that he took the liberty of installing the Aura for her, this is in the lease agreement apparently. Jaslyn looks down at her phone as the camera pairs, and who shows up on the camera? That’s right…Bryce.