The Booty Creek Cheek Freak more or less lives up to its ridiculous and extremely NSFW title with the sort of gusto you usually find in little kids playing pretend (also, seriously, don’t Google the title at work like I did). Coming from Jordan King, the developer behind the last year’s shockingly excellent Bloodwash, The Booty Creek Cheek Freak is a lot of fun…while it lasts.

BCCF was produced by Puppet Combo, the prolific indie developer behind such great titles as Babysitter Bloodbath and Murder House, and this game falls right in line with the titles actually made by Puppet Combo. The production values are comically low, with character models that would look bad in the original Thief game and environments that are hardly believable. Also, like Bloodwash and other PC titles, this deliberately crappy aesthetic lends Booty Creek Cheek Freak a lot of personality. Instead of coming across as bad, it’s more like a really good community theater production: clearly low budget, but charming. Plus, there’s an optional CRT filter that makes it look like you’re watching it on an old, crappy TV. I found it tough to make things out with that feature turned on, but it’s nice to have. 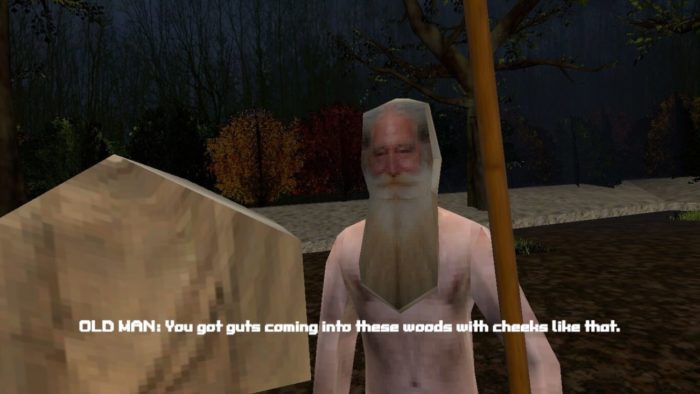 So what is this ridiculously titled game about? Gary and Connor are two strapping young men that have zero homoerotic tension between them whatsoever and they decide to go camping in the woods on a long weekend. Gary, of course, is only wearing a pair of cutoff jean shorts. The two of them are going about their business when an old man comes out of the woods and tells of a local legend. The legend of the Booty Creek Cheek Freak. Apparently, a long time ago a man with a really big ass got stuck on the toilet in the men’s restroom on the campgrounds. He wound up pooping on the floor and dying in that bathroom. Nowadays, if you poop on the bathroom floor, it will summon the eponymous Cheek Freak, and he will cut off your butt cheeks and wear them on his face.

This game revels in immature humor. I myself love a good old-fashioned poop joke when done right, and found myself laughing at how silly the plot is more than once. For instance: Connor says that all they have to do is not poop on the bathroom floor. Easy. Except he does. By accident. Somehow. The absurdity and refusal to elaborate on the game’s part reminded me of eleven-minute cartoon shorts that I watched as a kid. Overall the humor works for what it is, but how it affects you will depend on your proclivity for stupid jokes. This type of comedy doesn’t always land with me, but in the case of the Booty Creek Cheek Freak, it did.

The actual game is fairly simple. The opening is a walking simulator, with you running a few errands to move the story along. The game space is small, with only a few locations to explore, but the short length and compact nature of the environment mean that everything moves along at a really nice pace. You’re never bored playing the game if you’re into this kind of experience. The game’s second half is classic Puppet Combo and Puppet Combo adjacent titles, though. The Cheek Freak kidnaps Connor and takes him to an abandoned shack, where you must find six bones and flush them down the toilet to lay the Freak to rest.

It’s clearly inspired by the likes of Slender, but again, the relatively small nature of the environment means that what could have been tedious is instead compelling while it lasts. Despite how goofy the game is, there’s genuine tension in the second half, and you know the Freak is close by when you hear him sniffing around (side note: you need to disguise the smell of your butt with air fresheners scattered around the environment to ward off the Freak). People familiar with this style of game likely won’t have much trouble with this segment (I myself didn’t die while doing it). Still, it’s fun while it lasts.

The biggest sticking point with most people is that, yes, this game is rather short. Once I was playing, I beat the whole thing in just under half an hour. Granted, it’s free to download if you’re a patron of Puppet Combo, and the brief run time is rather refreshing. It’s the game equivalent of a sixty-five-minute exploitation movie; get in, get out, and you’re likely to have a good time in spite of yourself.

Developer Jordan King is clearly on the same wavelength as Puppet Combo, and I’m hoping that PC will continue to publish titles from King in the future. Between Bloodwash (seriously, go play it, it’s great) and The Booty Creek Cheek Freak, they’re a developer to watch. This game won’t necessarily appeal to everyone, but for what it is, it’s extremely enjoyable and shows that King is a creative, outside-the-box thinking developer. I hope that their next project doubles down on what made this and Bloodwash so good, and I’m looking forward to whatever it is.