My obsession with horror is rivaled only by my obsession with the Marvel Cinematic Universe, so for anybody who knows my taste in movies, it should come as no surprise that Doctor Strange in the Multiverse of Madness was my most anticipated film of 2022. The idea of a horror-centric MCU movie was just about a dream come true for me, and after finally getting a chance to see it, I’m super happy to report that it does not disappoint.

Doctor Strange in the Multiverse of Madness was directed by Sam Raimi, and it stars Benedict Cumberbatch, Elizabeth Olsen, Chiwetel Ejiofor, Benedict Wong, Xochitl Gomez, and Rachel McAdams. The film follows Doctor Stephen Strange as he travels through the multiverse to protect America Chavez, a girl who has the ability to cross universes, from a powerful threat that wants to steal her power.

So why did I love Doctor Strange in the Multiverse of Madness so much? Well, there are a few reasons. For starters, we have the main characters. If you’re familiar with them, you know how great they’ve been in the past, and they’re just as good here. MCU veterans Wanda Maximoff, Wong, Christine Palmer, and Stephen Strange are all just as lovable as we’ve come to expect, and newcomer America Chavez earns her place among them almost instantly. She’s played excellently by franchise newcomer Xochitl Gomez, so you can’t help but root for her from the moment you first meet her.

But as awesome as she is, the real stars here are Benedict Cumberbatch as Stephen Strange and Elizabeth Olsen as Wanda Maximoff. They give hands down the two best performances of the entire movie, and they absolutely nail every emotion their characters go through. You feel their pain when they’re sad, you rejoice with them when they’re happy, and you feel a little chill go down your spine when they begin to take a dark turn. 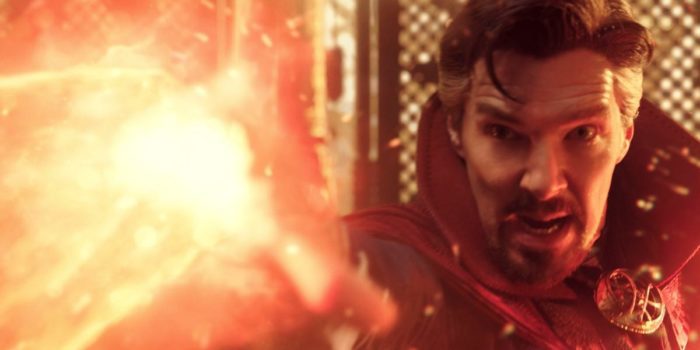 On top of that, Doctor Strange in the Multiverse of Madness also has a whole bunch of really fun treats for fans of comic book movies, and I ate up every single one of them. Admittedly, some have been spoiled by the film’s marketing, but there are still a few cool surprises that we weren’t expecting. And even when you know they’re coming, that doesn’t make them any less satisfying when you finally see them on the big screen. So if you’re a longtime fan of comic book movies, I can almost guarantee that you’re going to get a real kick out of this one.

Thirdly, Doctor Strange in the Multiverse of Madness also has an excellent message that I found quite touching. The story is essentially about lost opportunities, the pain of what could have been, and being happy with what you have rather than feeling sorry for what you don’t have, and I think it’s really going to resonate with viewers. We can all relate to at least some of the things the characters go through in this film, so that message is going to hit home for a lot of people.

Last but not least, we have to talk about the horror in this movie. Before I saw it, I read some early reviews that said this was a legit Sam Raimi horror film, and I mostly agree with that. Granted, it’s not all horror all the time, but Raimi gets plenty of chances to flex his genre muscles and show off what makes him one of the most iconic filmmakers in horror history.

In fact, a lot of this movie looks like it could’ve come straight out of the Evil Dead franchise. For example, it has a few scenes that feature the kind of quick camera movements Raimi is known for; some of the monsters look, move, and/or sound very much like Deadites; and there’s even a scene or two where Raimi uses wind in a way that any Evil Dead worth their salt will recognize. On top of that, Doctor Strange in the Multiverse of Madness also has some darker, much more horrific (in the literal sense of the word) moments to keep it from becoming too lighthearted. In particular, there’s one scene where the villain rips through a group of people in the absolute most brutal way I’ve seen in any MCU movie, and to be honest, I’m kind of surprised Disney and Marvel allowed this scene to be in the film. While it’s only PG-13 violence, it’s pretty extreme for that rating, so I’m sure that a lot of parents who take their kids to see this film are going to be in for a real shock when they get to this part.

All that being said, I do have to acknowledge that Doctor Strange in the Multiverse of Madness is not a perfect movie. While there are a few things I can nitpick here and there, my biggest gripe with the film is that it’s a bit too fast paced. Every once in a while, something will occur simply because the plot requires it even though it doesn’t flow all that naturally from the events that came before it, and every time that happened, it took me out of the movie just a tiny bit.

For example, there’s a scene where America Chavez says she trusts that our Doctor Strange is better than the other ones she’s met throughout the multiverse, but by that point in the film, he hadn’t really earned that trust yet. America didn’t know him well enough to make that judgment, but she did anyway because that’s what the story called for.

Moments like that happen a few times throughout the movie, but in the grand scheme of things, that’s a relatively minor complaint. The good in Doctor Strange in the Multiverse of Madness far, far outweighs the bad, so even though it’s only May, I can pretty much guarantee that this is going to end up being one of my top five favorite films of the year. It’s that good, so if you’re a fan of Sam Raimi or comic book films, you should definitely check this one out.

Doctor Strange in the Multiverse of Madness is playing in theaters right now.