When you think of the Marvel Cinematic Universe, what comes to mind? Cool technology and stunning superpowers? Heroes you love and villains you love to hate? Gripping stories that keep you going back to the theater again and again? Whatever pops into your head, I’d be willing to bet that horror isn’t at the top of your list. Hell, it’s probably not even on your list at all. The MCU isn’t exactly a horror powerhouse (to put it mildly!), so you’d be hard-pressed to find many fans who associate it with anything that even comes close to genuine horror.

But if we take a closer look, we can see that this perception isn’t entirely accurate. Not only are Marvel’s upcoming films Doctor Strange in the Multiverse of Madness and Blade expected to delve deeper into horror territory than the franchise has ever gone before, but in the last five years, the MCU has already given us some pretty cool horror scenes that are sure to delight longtime genre fans. They’re not at all what we’d expect from a relatively family-friendly franchise like this, but that’s part of the fun. The surprise makes them that much sweeter, so let’s take a look at some of the best and most unexpected horror scenes the MCU has to offer (so far!).

It should come as no surprise that we’re starting with Doctor Strange. It was directed by Scott Derrickson, who genre fans know from movies like The Exorcism of Emily Rose and Sinister, and he brought some of those spooky sensibilities to this film as well. It doesn’t have nearly as much straight-up horror as we might’ve hoped, but it deals with supernatural forces and evil beings of unimaginable power, so the whole story has a bit of a horror feel to it.

What’s more, there are two scenes in particular where Derrickson really gets to flex his horror muscles. First, as the movie opens, we see a mysterious group of hooded figures walk into a library (which we later learn is in Kamar-Taj), and they immediately tie up the guardian with their magic and then behead him in order to steal some pages from a spellbook. This scene is only a few minutes long, but it leaves a lasting impression that lets you know these villains are not to be trifled with. It’s as atmospheric as anything you’ll see in any horror movie, and it climaxes in one of the most cold-blooded murders I’ve ever seen in a comic book film, so horror fans are sure to get a kick out of this brief foray into the darker side of the MCU.

If we fast forward about a half-hour to Stephen Strange’s first meeting with the Ancient One, we find another scene that showcases Scott Derrickson’s horror roots in a different but equally effective way. When the Ancient One sends Strange on a trip through the multiverse, he passes through a place called the Mandelibus Dimension, and when he arrives, he starts to grow miniature hands out of the tips of his fingers. After that, the fingers of those hands sprout even smaller hands, and the cycle would presumably continue forever if the Ancient One didn’t pull him out.

Again, this shot only lasts a very short time, but it’s way more disturbing than we normally expect comic book films to be. It’s not gory or disgusting, but it’s legit body horror, and it sends chills up my spine just thinking about it. Those little hands growing from his fingers are absolute nightmare fuel, so I have high hopes that the next Doctor Strange movie will get the green light to explore the horrors of the MCU in even greater depth.

Thor: Ragnarok is arguably the funniest film in the entire MCU. Director Taika Waititi is a comedy master, and he brings all of that skill to his take on Thor. But this isn’t just a funny superhero romp. Under all the laughs and the jokes lies a depressing story about unimaginable loss, making it arguably the MCU’s darkest film as well. Odin, the mighty All-Father, meets a very sudden and unexpected death, the Warriors Three are mercilessly slaughtered by Hela, and Asgard itself is obliterated right down to its foundations, leaving an entire planet homeless. If that’s not dark, then I don’t know what is, so it’s not surprising that this film also includes one of the coolest horror scenes the MCU has ever given us.

The movie opens with Thor tied up in a creepy cage and talking to a skeleton, and he soon comes face to face with Surtur, a fire demon destined to destroy Asgard. The two talk for a bit, and when Thor breaks free from his chains, he has to fight Surtur and his minions to escape with his life. The scene is full of hilarious jokes, so it’s easy to miss just how horrific it truly is. But don’t let the humor fool you. Like the movie as a whole, this opening also hides some really dark content under its veneer of comedy. Thor is bound in chains and held captive in a fiery underworld by a demon, so while it’s not particularly creepy or disturbing like the horror scenes in Doctor Strange, it’s legit horror nonetheless. More specifically, it’s horror-comedy, so it’s the best of both worlds. It can make you laugh till your stomach hurts, but it’s also more than worthy of its status as one of the best horror scenes in the MCU to date.

Spider-Man: Far From Home might be the most surprising entry on this list. Most people see Spider-Man as one of the most family-friendly superheroes around, so they would never expect his movies to go anywhere near horror territory. But this one does, and I was very pleasantly surprised when I first saw it.

When Spider-Man encounters Mysterio for the first time after figuring out the truth about him, Mysterio creates a series of illusions to disorient him and win round one of their fight. Almost all of these illusions are creepy in their own way, but one of them is particularly scary. Mysterio makes Spider-Man see the tomb of his mentor Tony Stark, and without warning, a hand emerges from the grave and an Iron Man zombie crawls towards Spider-Man, scaring the absolute hell out of him.

This zombie is the torso of an Iron Man suit with its legs ripped off and part of its face mask missing, so you can see the decaying skull underneath. Its eyes and nose are just empty holes, and there are bugs crawling all over it. This thing is utterly terrifying, so I can’t say I blame Spider-Man for being scared out of his mind. Sure, he’s a superhero, but he’s also just a high school kid.

This is hands down the scariest horror scene in any MCU movie, and to be honest, I’m a bit surprised Marvel okayed it. While it’s only a few seconds long, it’s way more intense than anything else they’ve ever put on the big screen. But I’m glad it’s there. It’s an awesome scene, and it gives me high hopes for the MCU’s upcoming horror-centric titles. 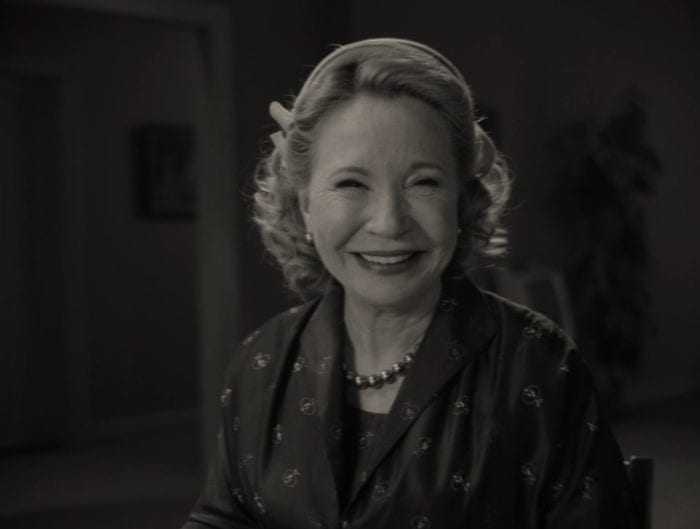 WandaVision was the MCU’s first real foray into television (shows like Agents of S.H.I.E.L.D. and Daredevil were never truly integrated with the movies), and it’s also the first (and so far only) time Marvel has really leaned into the more horrific side of their universe. While this is far from a horror show, it has a lot more horror than anyone expected. There are several spooky scenes scattered throughout its nine episodes, so let’s take a look at two of the best.

We can start with the pilot. Towards the end of the first episode, Wanda and Vision have Vision’s boss Arthur and his wife over for dinner, and in the middle of the meal, Arthur starts choking on his food. His wife tells him to stop, but he’s genuinely unable to breathe. He inches closer to death with every passing second, but his wife doesn’t panic or become upset. Instead, she just repeats herself, laughing it off like it’s a big joke. It’s almost as if she’s stuck in some sort of loop, and her smile grows bigger and bigger every time she tells him to stop. Her reaction is unnaturally cheerful and completely incongruous with the gravity of the situation, so the scene becomes very unsettling very quickly and injects an unexpected bit of horror into an otherwise rather lighthearted episode.

If we skip ahead to episode four, we’ll find the best jump scare I’ve ever seen in a comic book show or movie. At one point towards the end of the episode, Wanda turns around to face Vision, and she sees him dead and without the mind stone in his head, just like he was at the end of Avengers: Infinity War. This shot only lasts a few seconds, but it’s an absolute shocker. Not only does it catch you completely off guard, but dead Vision looks way creepier than you’d ever expect from a busted hunk of metal. He’s just as chilling as a walking corpse, so this is arguably the most effective horror scene in the entire MCU.

We could spend a whole article on just the horror scenes in WandaVision, but hopefully I’ve given you a little taste of the treats this series has in store for us genre fans. It has jump scares, it has unsettling anomalies, and it even has a few scenes with some nasty witches. It’s more than anybody could’ve expected from the MCU, and it signals that Marvel is ready to expand their horizons and venture into previously unexplored horror territory.