I love vampires. They’re quite possibly my favorite movie monsters, and probably my favorite thing about them is how versatile they are. They can be anything from animals to aristocrats, and their films can span the entire gamut of the horror genre, from comedies to poignant dramas to straight-up scarefests. So naturally, I was super excited for Kicking Blood. It looked like it would use traditional vampire lore to tell a touching and genuinely human story, so I couldn’t wait to see it.

That’s a really intriguing premise, but unfortunately, Kicking Blood fails to take full advantage of it. It has its moments, but on the whole, the narrative feels really undercooked. It clocks in at a bit under 80 minutes, so it just doesn’t have time to develop its story the way it should. Instead, it simply throws plot points at you in a somewhat haphazard way, so it feels more like the Cliffs Notes version than the real thing.

For example, we don’t really see the negative impact Robbie’s alcoholism has had on his life. We see some characters talk about it a bit, and we see him living out on the street for about two minutes, but that’s all. We never get to find out for ourselves just how out of control his addiction truly is, and that goes against one of the cardinal rules of filmmaking. 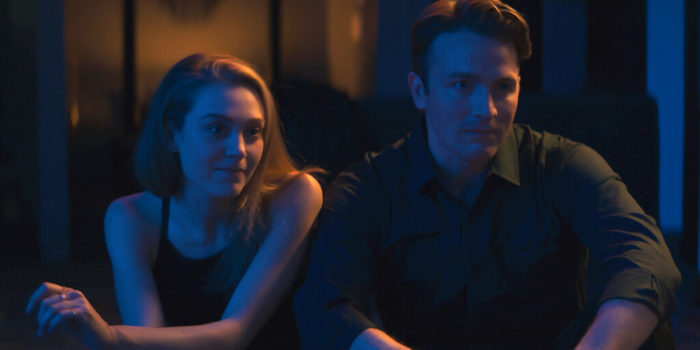 I’ve said this in multiple reviews before, and I’m sure I’ll say it in multiple reviews again after this one, but it’s always better to show the audience something than it is to just tell us about it. Film is a visual medium, so it’s much more impactful if we see something for ourselves than if we simply hear some characters talk about it.

And unfortunately, Kicking Blood completely ignores that principle in its treatment of Robbie’s alcoholism. It tells us way too much and shows us way too little, so I never really bought into the character or his struggle. That immediately robbed the story of half of its emotional impact, so right off the bat, the film faced an uphill battle to win me over.

Along similar lines, Kicking Blood treats Anna’s struggle with her addiction in a frustratingly cursory manner too. At one point in the movie, she simply decides to stop killing people and drinking their blood, but it never really explains why. You can surmise that she was somehow inspired by Robbie’s attempt to quit drinking, but it never fleshes that idea out. Instead, her decision seems to just come out of nowhere, so it’s more jarring than moving.

What’s more, once Anna makes that choice, the story continues to move at a breakneck pace, so we don’t get to see its full effect on her. Instead, we just see bits and pieces of her struggle, and while it’s enough to give us the general gist of what she’s going through, it’s once again way too fast to have any real emotional impact.

And the rest of Kicking Blood has that exact same problem too. Every plot point in this story is treated in a similarly hurried manner, so it’s just way too compressed. Like I said before, it feels more like the Cliffs Notes to the movie than the movie itself, and that just ruined the entire experience for me. All that being said though, there are a few redeeming qualities that make this film almost worth a watch. For starters, the acting is pretty good, and some of the cinematography is quite beautiful. On top of that, when Robbie first goes to Anna’s house, the two have a conversation that I really enjoyed. Anna tells Robbie she’s going to kill him and drink his blood, and unlike most of her victims, he just accepts it. This leads to a pretty interesting discussion, and I quite liked seeing them talk through this odd situation.

But hands down, the best thing about Kicking Blood is the vampire horror. In particular, when Anna and her undead friends go on the attack, it’s pretty fun. Granted, these scenes tend to hold back on the gore, and they’re not particularly original, but if you’re a big fan of vampires like I am, they’re cool enough to satisfy your thirst for bloodsucking mayhem.

Unfortunately, though, those positives aren’t enough to save the film. As much as I enjoyed parts of Kicking Blood, it just doesn’t have enough narrative bite, and that’s a real shame. I think a longer, more fleshed-out version could’ve been really special. If you could retain the film’s strengths and smooth out its weaknesses, this would be a really poignant metaphor for addiction and the struggles addicts go through to kick their dependencies and compulsive behaviors. But unfortunately, that’s not the film we got. Instead, Kicking Blood wastes almost all of its potential by not fleshing out its story, so I’m sad to say that I can’t recommend it.