There seems to be this ardent need in horror to take something beloved from other genres and turn it into a gruesome affair. Ever wonder what Pride and Prejudice would be like with zombies? Well, someone did. Ever wonder what Jaws would be like if messed with by mad scientists? Deep Blue Sea or any Sharknado movie may be for you. Groundhog Day with a slasher twist? Happy Death Day. You get the idea. Student Body continues this tradition of “what if” thinking by taking the campus stalker trope that’s as near and dear to our hearts as any sub-genre mayhem and mashes it into The Breakfast Club script, a thing horror has been doing a lot since the 90s.

Take a handful of high-school archetypes, throw them in a school setting, and pit them against an overstepping authority figure meant to inspire. Now, make it deadly. Since Teaching Mrs. Tingle, the trend of Breakfast Club horror has only emerged more. Joseph Khan’s Detention riffed on the film and Scream writer Kevin Williamson’s body of work, including Teaching Mrs. Tingle and other high school dynamics in The Faculty and Dawson’s Creek. In 2014’s Bad Kids Go to Hell, Judd Nelson swapped roles from his outsider role as Bender in The Breakfast Club, playing a villainous headmaster instead. Finally, there’s Into the Dark’s “School Spirit” from 2019, which I find is the film Student Body relates closest to. 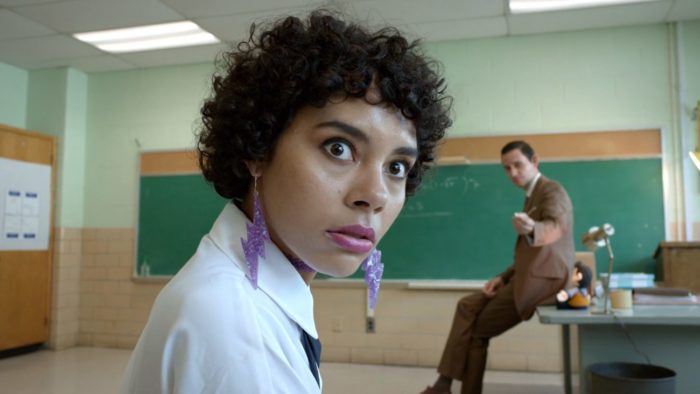 Student Body’s trailer impressed me greatly after a friend forwarded it and asked if I had seen it yet. To my surprise, I hadn’t even heard of the film, which is strange because I often scour the horror depths of YouTube, looking for new trailers. Harley Quinn Smith always stands out to me, probably because I enjoyed the sh*tshow silliness of Yoga Hosers. Otherwise, the trailer had some heavy Urban Legend vibes that heavily piqued my interest.

The first thing on Student Body’s agenda was character introduction. Establishing the vapidity of teenagers, though primarily through the haves versus have-nots’ lens. We meet Jane (Montse Hernandez) watching her friends approaching her in the school halls and sense that she feels outcasted. The photos inside her locker of good times with Merritt (Cheyenne Haynes) have seemingly gone sideways as try-hard Jane doesn’t have the same ability to coast on trust fund riches and influential parents to get her into university. The film sets up Jane’s character very quickly and provides a compelling atmosphere with the out-of-place Mr. Aunspach (Christian Camargo), who looks like Bewitched’s Dick York in his three-piece suit. Student Body is set up in about ten minutes but continues to explore the characters linearly, leaving little subtlety, lingering in unnecessary exposition that weighs down the film’s first act by feeling the need to over-explain. 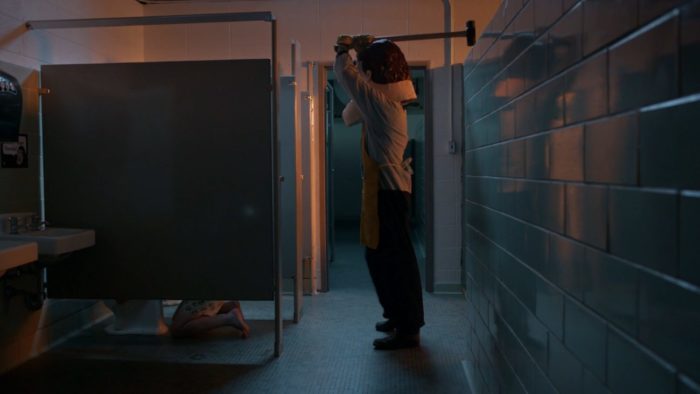 Jane is a whiz kid, able to take complex calculus problems and whittle them down to their solutions without much thought. She becomes the ire of her classroom when she’s the only student to receive an A grade on a test, resulting in the teacher not allowing the class to retake the test. Their calculus teacher (Camargo) aggressively asserts himself toward students expecting a handout. He incurs the vengeance of Merritt, who takes advantage of Jane’s situation as the teacher’s pet, by perverting the unconventional teacher’s intentions and using her father’s capability to pull funding from the school to get the teacher fired.

There are a couple of tense moments with the teacher early on, but nothing that provides the tension of an inescapable situation. The longer the movie went on with these unlikeable characters and without much suspense, I started comparing the film to ’80s slasher movie Final Exam. Though death comes for its characters throughout the film, Final Exam is uneven, transpiring after long periods of setup, and a final girl that doesn’t even know she’s being stalked until the last ten minutes. Luckily, Student Body doesn’t wait that long to get the fun going, and at around the halfway mark, we finally get our first kill.

The disparaging part about Student Body is that it has a lot going for it. Writer-director Lee Ann Kurr has all the right pieces: insightful themes, fantastic cinematography, a wonderfully talented young cast, and some rather witty dialogue. Peppering Holden Caulfield and Nietzsche ideas into one of the privileged high school characters (Anthony Keyvan). However, the initial pacing of the film will become tedious to some viewers and will likely prompt them to prematurely end the movie before it gets to the running and screaming portions. I think that would be a mistake. While it isn’t reinventing the genre, Student Body isn’t devoid of entertainment, fitting well with late-night B-movies. 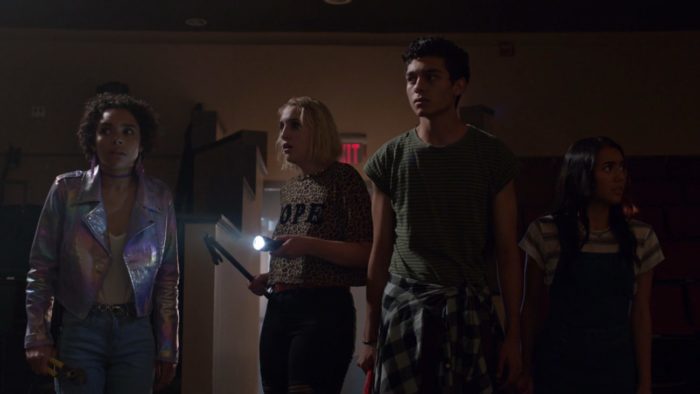 The only other thing that I questioned was why the killer feels the need to wear a disguise when their identity is never in question. While the mascot suit adds some creepiness, there’s no mystery in the story.

Overall, Student Body isn’t anything we haven’t seen before, but I love seeing new voices emerging in the genre. The film ends up a bit of a mixed bag, but I liked what it was trying to say. If nothing else, the film tells bright students to shine and not get bogged down by popularity contests. While Jane worries about falling out of her friend group, she can’t see that she’s moved beyond the infighting, jealousy, and snobbery her friends exhibit when they’re together. It’s those themes of allowing ourselves to grow beyond the limitations imbued in us by our oldest friends or the restrictions we place on ourselves in order to satisfy the friends who aren’t succeeding with us. Good friends will encourage you, not so good friends may subdue. These small insistences in the script elevate Kurr’s film into something worth noting, suggesting something special is yet to come from the writer-director.

Student Body is now available across all VOD platforms.