So, there I was, bored on a Monday night flipping though the many streaming apps to which I subscribe, and it jumped out at me like a flashing neon sign: AQUASLASH. The poster promised a horrible, B-type movie with an ’80s horror vibe and I was immediately enthralled (my companion, not so much, but I had control of the remote). 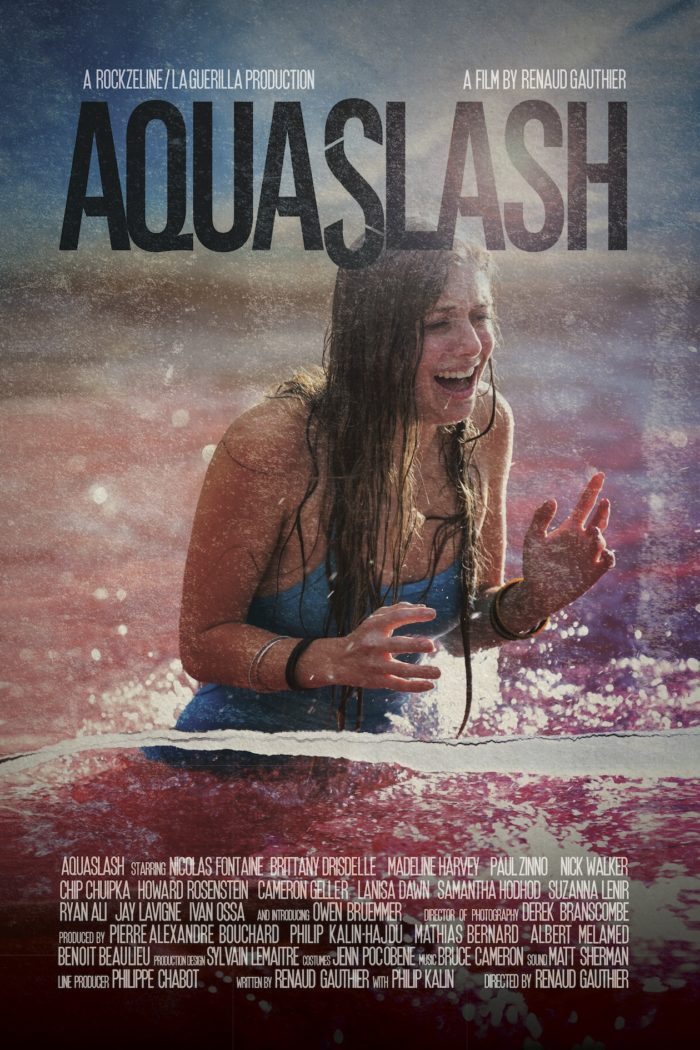 Aquaslash is a horror/comedy surrounding a group of Valley High School graduates who head off to Wet Valley Water Park for one last hurrah together before they go their separate ways into life. It is full of the usual teen horror tropes that would make Jason Voorhees want to slash everyone from participant to lifeguard and the critics hated it. Therefore, I loved it.

The plot is simple: a deranged killer sets his/her sights on a group of graduates who are in a competition for a cash prize for the fastest team to slide down the park’s water slides. Honestly, I had to look that up. I had no idea what the plot of this film was because the competition is not even mentioned until the end. It’s worth the wait though because these scenes house some of the greatest slasher sequences I think I’ve seen in my B-movie history.

Writer/director, Renaud Gauthier, knows how to make a horror/comedy that could make fun of itself and call back to the ’80s horror roots—the graduation party is ’80s themed and the teenagers frolic in bad wigs and tiny bikinis set to the music of a local band who does a very poor cover of Cory Hart’s “Sunglasses at Night.” Not just poor, but absolutely cringeworthy.

I’m going to go a little deeper into the movie here and there are a couple of spoilers so if you want to save the details of this gem for yourself, you may want to stop reading here and go stream this classic.

Gauthier does a great job of throwing us off the scent of the killer (and honestly the plot) when he introduces Priscilla (Brittany Drisdelle) who is the park’s co-owner and resident Mrs. Robinson. It seems that her sole purpose of being at this water park is to hunt for any of the new virgins who show up at and introduce them to the ropes of manhood (that made me cringe just writing that). She hates her husband, who also has an issue with the young graduate ladies who visit the park and does her best to rub her dalliances in his face. Priscilla meets with a potential buyer (who also happens to be the father of one of the bandmates) who offers to purchase the park and she sees a way to not only get away from her husband but to get out from under this financial boulder as well.

The thing that we later find out about Priscilla is that her father was killed at this park years ago when no one was watching, and no one was able to save him. She witnessed the entire thing and is out for revenge. Now, there are a few issues with timing that don’t really work out here. One of the characters mentions that there was a series of murders (we are only privy to that of Priscilla’s father and it was more of an accident than a murder) that happened at the park 30 years ago and it was also mentioned that Priscilla graduated in 1992. When we flash back to her witnessing her father’s accident, she seems to be about 11 or 12, so I’m not sure that all works out, but it doesn’t really matter. We’re also not really sure how or why she comes to be a co-owner of the park, but I suppose that doesn’t matter either in the grand scheme of the movie. This isn’t a thinking person’s film; this is just for the fun of passing an evening with a little laughter and a lot of “what just happened?” 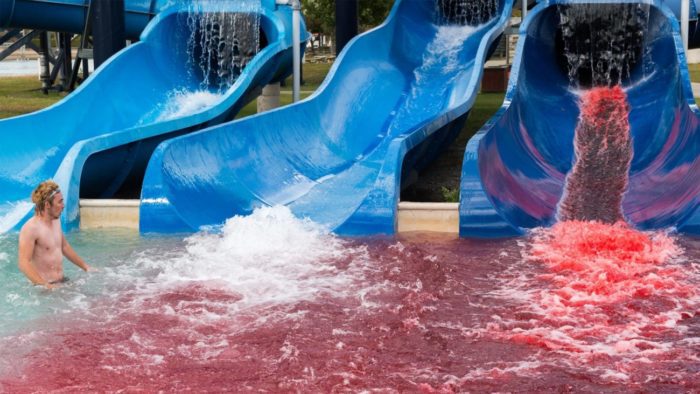 What does matter is the absolute blood bath (no pun intended) that takes place in the ending scenes. This mass killing of water park patrons is something akin to the Red Wedding and completely Russian Roulette. During the competition, there are three slides in play and what participants don’t know is that one of those slides has been rigged with two blades that will dismember riders the second they go through the tunnel. And there’s no way around this booby trap except to go through it. Just imagine the pile up when these unsuspecting competitors take their chances down the slide. The effects on this one probably soaked up the entire budget of the film, but they are worth it. Kudos to the filmmakers on that one.

So, as the first few riders are killed, the idiot lifeguard at the end of the slide is paying no attention and there is just a sea of blood that begins pouring down the slide (ala The Shining) followed by a mix of guts and body parts. Priscilla and her dim-witted husband lose contact with the lifeguard and continue sending competitors down the slides, increasing the body count. Soon, it is complete pandemonium as people begin to notice the pool water is now red and pieces of their friends are floating by them. 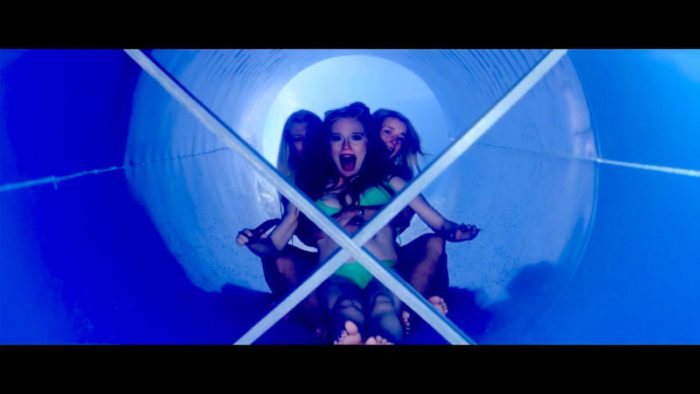 Now, I’m not saying this movie is good—no, far from it. But I am saying it is 71 minutes of fun that should become a classic in the vein of something like Sharknado or Piranha 3DD.

Aquaslash premiered at the Fantasia Film Festival on July 29, 2019 and was released at drive-in theaters and video on demand on June 23, 2020. You can catch it on Showtime or Amazon Prime now. Be sure to watch during the ending credits where two water park goers sit at the edge of the pool seemingly unaffected while body parts bounce on the water alongside them…hilarious.