If you’ve seen The Muppets (2011), you may recall Tex Richman telling the Muppets, “No one cares about your goody-goody, hippy-dippy, Julie Andrews and Dom Deluise-hostin’, singin’-and-dancin’ act anymore!” While anyone dissing Julie Andrews is fighting words to me, clearly, Tex Richman has never watched The Muppet Show. Yes, Julie Andrews showed up for a (wonderful) episode, but the same TV show that welcomed the Mary Poppins star would, just one year later, open a coffin to reveal a shock-rock star. Welcome to my breakdown…of Alice Cooper’s guest appearance on The Muppet Show!

Of course, before that (coffin-)opening number, we start off with Scooter give Alice Cooper a “15 seconds to curtain!” call. Cooper is surrounded by monsters that look like they’re right at home on The Muppet Show…except Scooter points out that they’re not part of the show. But Cooper isn’t fazed: they’re his monsters!

The Muppet Show is always chaotic, and this shows that Alice Cooper’s not only perfectly fine with that, but contributing his own chaos.

The Muppets have always been an open place for everyone (including maniacally laughing and hand-rubbing phantoms), so why not? (Just don’t tell Camilla about the chicken incident.)

Just like in the Vincent Price episode from the first season, when Kermit announces “very special guest Alice Cooper,” he shudders in fear. Even Gonzo’s trumpet gag that changes every episode has an eerie, yet funny twist.

Then, we get to the aforementioned opening number (“Welcome to My Nightmare”), which Kermit barely gets through introducing as the lights go out, chains rattle somewhere offstage, and his fear gets the best of him.

The coffin, the dungeon set, the fog…it’s everything you’d expect from a horror movie. Alice Cooper’s costume screams (pun intended) “vampire.” But this “vampire” sings and dances, and very early in the song, gets a skeleton involved, who laughs in a very Muppet-like way. Cooper’s aforementioned monsters materialize as a backup band, and, eventually, Cooper conjures up a Muppet ghost to dance with.

While this number may have briefly started out on the eerie side (especially when compared to usual Muppet mayhem), it quickly takes its darker elements and makes them fun. Monsters aren’t so scary when they’re Muppets, and even less so when they’re playing instruments. A dancing ghost Muppet is much more silly than spooky.

Unlike the Vincent Price episode, Alice Cooper also gets a macabre backstage plot to thread through the episode.

Backstage, Kermit ushers a William Tell act onstage for the next act. While we don’t get to see the act itself, we do get to see some of the unfortunate fallout backstage as Kermit talks to Cooper after the latter’s opening number. Kermit makes an offhand remark about how cool it must be to be a rock star. Cooper wastes no time in pulling out a contract that guarantees fame and fortune in the area of the signer’s choice.

The price for such a service?

Kermit, being the bundle of nerves he sometimes is as chaos mounts both on and backstage, wants no part of it. But a wayward arrow from onstage sticks the contract to the railing, meaning it’s going to hang around (pun intended) for a while.

After the next sketch, involving Dr. Bunsen Honeydew and Beaker showing off Muppet Labs’ new Germ Enlarger, we head backstage again, where another Muppet has found the contract. Even after Kermit explicitly explains that this fame and fortune comes at the cost of selling one’s soul to the devil, this Muppet is perhaps even more eager about the opportunity. And what weirdo would want to sell their soul to the devil?

Thus, self-proclaimed “weirdo” Gonzo begins his quest for a pen. I’m hard-pressed to think of family shows on broadcast television nowadays that could get away with explicitly talking about selling one’s soul to the devil.

And yet, rather than being creepy, it’s funny because of the goofiness that surrounds it. A contract involving selling one’s soul to the devil is a potentially dark concept, but someone desperately running around to try to find a pen because they’re so excited to sign it makes it silly and just as weird as the rest of The Muppet Show.

Onstage, we get a funny sketch featuring stalagmites, stalactites, and toothaches, before heading backstage again, where Sam the Eagle decides to stand up for his morals and give Alice Cooper what he believes to be a severe verbal dressing-down. Unfortunately for Sam, he and Alice are on such opposite sides of the spectrum that it backfires spectacularly.

Fozzie makes his first appearance in the episode in the canteen, so freaked out by the goings-on surrounding Alice Cooper’s guest appearance that he’s hiding out with folks he sees as “clean-cut kids”…who then open their mouths in laughter to reveal sharp teeth, crushing his feeble hope of a non-spooky show experience. Given that these Muppets really do look like stereotypical “clean-cut kids” except for their teeth, and that their teeth are Muppet teeth, this is a comedic twist rather than a creepy one. Fozzie, distraught, pines for something “nice” on the show.

And right on cue, we get a nice breather from the chaos, both macabre and Muppet-y, with Robin the Frog (Kermit’s nephew) giving us a lovely rendition of “Over the Rainbow.” The Muppets are experts at chaotic comedy and high energy, but they’re also known for their sentimental, quieter, and meaningful moments and this particular moment shows that there’s good reason.

After that, though, it’s right back to macabre Muppet mayhem. Backstage, Kermit’s alone and looking through a book when things start to get spooky again, starting with a moving candle (not unlike the gag in Abbott and Costello Meet Frankenstein), which Kermit blows out… 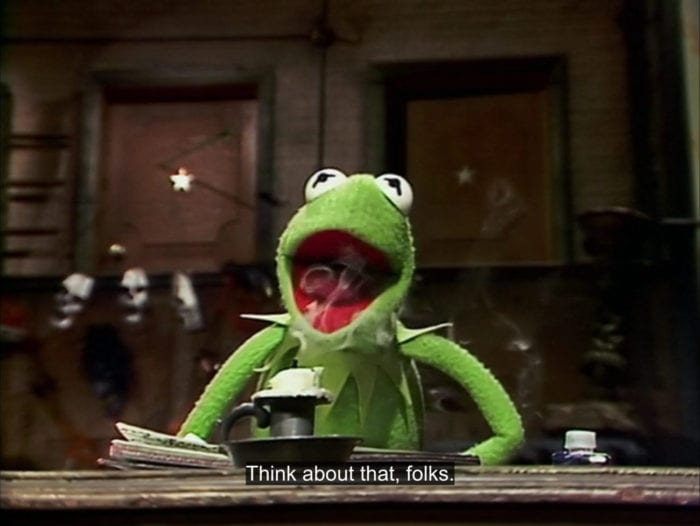 …before a gaggle of Muppet monsters chases him away so they can do a backstage musical number: an upbeat song called “Once a Year Day,” espousing how everyone’s entitled to some time in which to let loose and have some fun.

We’ve seen these Muppet monsters throughout the episode, and having them sing an upbeat song about being wild makes going wild and “jumping fences” sound really fun and inviting.

Alice Cooper reappears for the next song, “You and Me,” a very genuine and earnest song of love, sung by Cooper to Beakie, another Muppet monster, as they lounge backstage. Beakie also joins in to make it a duet. The song’s still sweet, but the fact that it involves a Muppet monster gives it a humorous streak. The end of the song brings a twist: Beakie is actually Miss Piggy! She apparently was interested in Cooper’s offer. But upon seeing her new visage in a mirror, she calls off the deal.

As she leaves to go onstage for “Pigs in Space,” Cooper has to have a chat about his struggle to make any “sales” with his boss, who I’m sure is very open to hearing about alternative sales ideas.

Yes, Alice Cooper’s talking on the phone with his boss, the devil, and “the boss” is not happy with Cooper’s lacking soul sales numbers, to the point of having a heated reaction (pun intended). But, Cooper takes it in stride and makes clever quips about it, demonstrating that not only is this a humorous plotline, but also that the show’s moving along, humor included, quickly enough that we shouldn’t delve too deeply into the dark implications of dealing with the devil. On The Muppet Show, he’s just another addition to the Muppet mayhem.

After “Pigs in Space,” it’s time for the closing number. Alice Cooper leads a group of human-sized (and larger) Muppet monsters in a rendition of “School’s Out for Summer.”

While this song doesn’t have anything that could be dark, like “Welcome to My Nightmare,” I did notice that the comedic happenings around the song gave me a different perspective on it. I was paying more attention to the puns and noticing more of the humor in the song.

Even for a song that’s not dark at all, presenting it in a comedic way shifts the focus to the more humorous parts of the song that already exist and adds humor to parts that wouldn’t have it otherwise.

Fittingly enough, Alice Cooper ends the episode in a red, ripped-up bodysuit with a devil’s tail and a pitchfork in hand.

Much of this episode is about taking potentially spooky subjects and creepy characters and tackling them in a goofy and humorous way. A proposed literal deal with the devil may frighten Kermit, but he can’t focus on it for long because he has to keep some sort of grip—however tenuous it may be—on the constantly unraveling show around him. Thus, we don’t think too deeply about it either. Before we know it, Gonzo’s so excited to sell his soul that he’s begging the world for a pen. Miss Piggy actually starts to follow through with the deal but has her own freakout—this one, though, is in anger. It turns out, all it takes to defeat a deal with the devil is some angry yelling from Miss Piggy.

If having someone who actually works for the devil guest star on your show and having him try to convince multiple cast members to sell their souls isn’t a big deal; if you can just decline the sales pitches, take the spookiness in stride, and add your flavor of comedic chaos to it; and if you’re going to welcome the guest star the same way you’d welcome Julie Andrews or any other guest star, then it’s not a big deal. When you really break it down, it’s just an invitation to engage with something spooky and have as much fun with it as possible.

Now, how can I make sure enough people read this article that we get more eyes on this fun and freaky episode?

More From: The Muppets