With all five seasons of the original The Muppet Show now streaming remastered on Disney+, it’s the perfect time to go back to the beginning of the Muppet troupe as we know them today (because they did appear in various capacities before uniting for their self-titled show) and look at the macabre Muppet moments of The Muppet Show! The first freaky episode is from the first season and originally aired in 1977. With “very special guest Mr. Vincent Price,” what sort of episode did you expect? 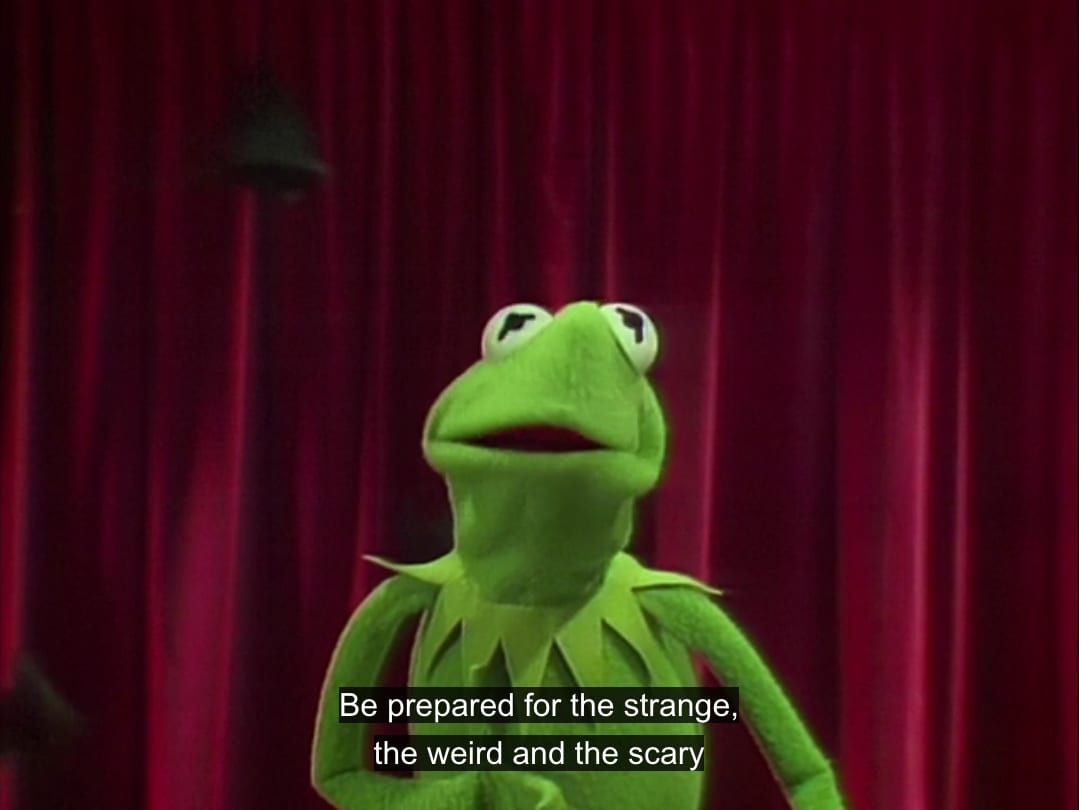 The Muppets fit any time of year: they’re evergreen (pun intended). If one had to associate them with a particular holiday, though, I’m sure many would say, “Christmas,” thanks to The Muppet Christmas Carol (1992) (which I’ve written about), various Christmas TV movies and specials (including a personal favorite of mine that I’ve also written about, It’s a Very Merry Muppet Christmas Movie), and, of course, the best version of “The Twelve Days of Christmas.”

But there have been a fair share of macabre Muppet moments through the years. It’s helpful that the Muppets’ roster already includes various creatures and monsters, including, notably, Uncle Deadly, who appeared in early episodes of The Muppet Show, then all but disappeared for years before breaking back in with a featured role in The Muppets (2011), and has stayed a core Muppet ever since.

While The Muppet Show is chaotic by nature, the first season is noticeably experimental in a different way. Many characters don’t have the voices or looks that we’re used to now, and some even have multiple voices during the course of a single episode as different performers use them for different gags. In an environment where everything’s being thrown at the wall to see what sticks, a few bats will fit right in amongst the frogs, chickens, and “whatevers.”

This spooky episode bites right into the freaky factor from the first few seconds. Before the theme song even begins, Kermit the Frog announces Vincent Price’s name with a worried face and a shudder. Fozzie’s joke during the theme song has a macabre twist.

After the theme song concludes, Kermit introduces the episode by outright stating that it’ll be “very unusual,” even going so far as to say that there won’t be the usual Muppet madness… and then Fozzie promptly pies him in the face.

Throughout this introduction, Muppet bats flap behind Kermit. Because they’re Muppet bats, however, they come across as more silly than spooky. This is actually a running motif throughout the episode: all of the horror-adjacent elements—monsters, ghosts, and even fangs in Vincent Price’s mouth—are Muppets (or, in the fangs’s case, of Muppet-like material). Because they’re Muppets, not only do they not look like such creatures typically would when portrayed via CGI, animatronics, or other method, but they’re also fuzzier, softer, and oftentimes more colorful. They don’t look like a threat, and their actions and performances throughout the episode prove this.

The episode’s first musical number, “I’ve Got You Under My Skin,” is a great example of this. Even though a giant orange monster (Behemoth) begins the number by swallowing a smaller Muppet (Shakey Sanchez) whole while the latter literally shakes in fear, beyond the fact that the two are Muppets, there are several reasons why this comes across as pure comedy. The song itself is not remixed to sound dark or sinister, and those who know the song outside the context of The Muppet Show will pick up on its use as an extended pun. But for those who don’t, the swallowed Muppet pops up (literally) again and again during the song, making it into a duet, and turns up later in the episode: still shaking comically after their ordeal, but definitely not digested.

The Muppets are no strangers to musical numbers or to eating each other, but this musical number puts the focus on one Muppet eating another, which is an appropriately odd and amusing way to begin this episode.

The next sketch is perhaps the most direct horror influence in this episode. Rather than using horror elements to fit the Muppet setting, this sketch uses the Muppets to fit a horror setting. Fozzie and Gonzo shudder in comic terror in an old castle and are hit with an avalanche of horror clichés that crash into each other to the point of absurdity.

The finale of the sketch breaks from horror tropes for a Muppet-style gag, but Fozzie and Gonzo still treat it seriously and flee in fear.

The next sketches and brief gags between sketches revert back to the format of fitting horror elements into the Muppet setting. Recurring segments such as Wayne and Wanda’s always-doomed act, “Panel Discussion,” “At the Dance,” “Talk Spot,” “Muppet News Flash,” and “Talking Houses” all keep their usual format, but with more macabre jokes and gags. A trio of ghosts singing “I’m Looking Through You” is another instance of an innocent song made spooky via pun, but also quite funny.

Considering this is their first “spooky” episode, the Muppets certainly learned how to blend their sensibility with horror and horror-adjacent elements quickly.

The final full sketch of the show is the biggest—literally and figuratively—blend of comedy and “horror” in this episode. A disheveled and sinister-looking and sounding Vincent Price plays an ominous organ, soon joined by a large cast of colorful monsters and ghosts… to sing “You’ve Got a Friend.”

Though Price’s voice is gruff and trembles like a creepy laboratory assistant and the organ continues through the song, the subversion here is not that creepy characters are taking an innocent song and twisting it: it’s that, despite their outward appearance that some may find creepy, they’re singing this song earnestly.

The Muppets, as a whole, both intentionally and unintentionally, are an environment where everyone fits in and everyone subverts expectations. A three-headed monster that’s managed to get through life successfully somehow can never get its three heads to agree on anything. The most ferocious-looking monsters can have a heart as big as their teeth or horns. The “crown prince of terror,” Vincent Price, can be an expert on gourmet cooking (which was also true in real life). And they can all be colleagues and friends who sing and dance and make people happy together.

In the end, despite Kermit’s insistence to the contrary, the Vincent Price episode of The Muppet Show doesn’t feel fundamentally different from other episodes. It has a slightly different flavor, but many Muppet Show episodes and other Muppet productions have different flavors. The Muppets have a way of simultaneously molding themselves to fit whatever they’re taking on and molding whatever they’re taking on to fit themselves. They bring their distinct Muppet sensibility to everything they do, but they also adapt to their surroundings.

Whether you’re a Vincent Price fan, a Muppet fan, or just want to see this combination that, in theory, should never, ever have worked, I recommend checking out this episode. Vincent Price is clearly having fun, as are the Muppets, and as are we, watching the Muppets go macabre. It wouldn’t be the last time the Muppets found themselves entangled with horror elements, and this first outing into playing with the genre for The Muppet Show shows why.

You really should watch it, because you never know… if you don’t, you may just… pay the Price. 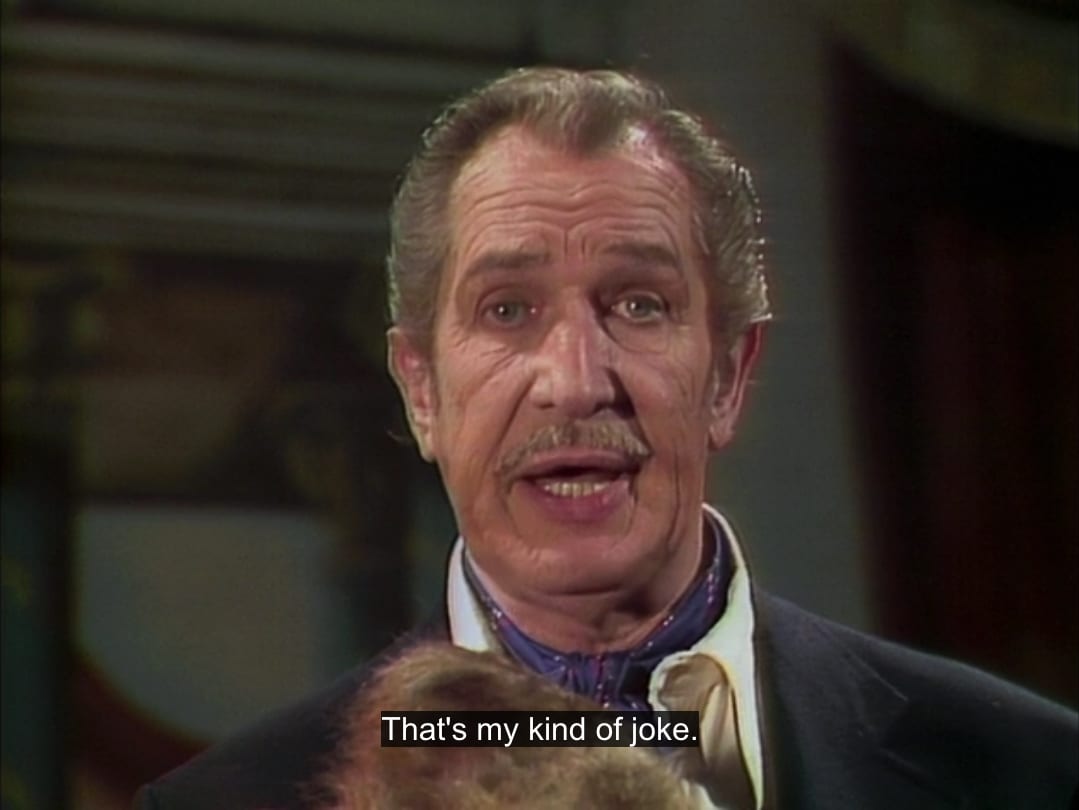 More From: The Muppets