I’m not sure if I’ve ever participated in a fantasy murder board game before. I know they are out there. I like the idea of them, especially if the game requires you to deceive the other players. It’s probably why I enjoy the computer game Among Us so much. So a film like Murder Bury Win, which introduces us to a board game where you assume the role of a murderer piques my interest. However, when the fantasy of the game begins to bleed into reality, things can get messy fast.

This is all too true for the three protagonists and creators of the game, where they find themselves the actual players in covering up an accidental murder. Adam (Erich Lane), Barry (Henry Alexander Kelly), and Chris (Mikelen Walker) are complicit in the murder of indie board game tycoon V.V. Stubbs (Craig Cackowski) and must, to great comedic heights, use their knowledge from their own game to try and get away with it.

Written and directed by Michael Lovan, Murder Bury Win is an excellent dark comedy. The film’s irreverent knowledge about boardgame culture (especially the funding side of things) coupled with a competently written story, makes for a fun ride with a sprinkle of the morbid. It’s a rare find to watch something revolving around a board game, and MBW succeeds in bringing us a darker side to role-playing.

Right from the get-go, this is a film with board game enthusiasts in mind. It parodies infamous games splendidly (Puppies on Fire) and ‘Game Changer’ is this film’s version of Kickstarter. The opening adopts a creative style of showing the characters behaving in their own board game in real life. It’s a unique opener, even if we know next to nothing about the game that’s being portrayed in a realistic style. This mimicry of board game playing left me wanting more. This style is never revisited but does an exemplary job of setting up the kitsch tone the film is seeking. It would have been nice to see this style return, however, it doesn’t dampen the goodness to be had.

Once the story really kicks off, the best quality about the film is the three friends, who have an interesting friendship dynamic. They made me want to be their friend. Even in their dreadful circumstance. Not much is revealed about how these three friends came to be. Adam sticks out as a brash, borderline psychotic. Chris roots us in realism and probably acts how we would act in that scenario. And Barry really doesn’t want to be there. I found myself warming to their unusual friendship the deeper they get in a mess, which is fantastic since they carry the entire film. 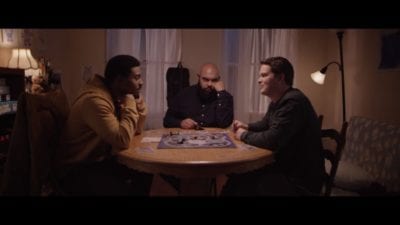 I absolutely love how the three deal with the mess they get entangled in. Especially when they have to resort to their very own rules they made for a game based on murder. Once Stubbs gets bear-trapped to death, Mikelen Walker as Chris delivers hilarity as he comes to terms with the brash and morbid actions led by Adam, who just wants to hide the body. His frustration is suitably over-the-top and you feel the situation grinding against his want to do the right thing.

Erich Lane gives us an almost Mormon-like character as Adam, who is twisted with dark logic. His meticulous approach to cleaning up the murder contrasts the other two’s reluctance and it makes for an engaging watch. You never quite know what he’s going to do next. Barry is probably the weakest character of the bunch. Henry Alexander Kelly does an excellent job in conveying a heart-of-gold character, yet his traits are buried by the other two characters. If he was given more time to flourish, it probably would have made the ending slightly better. It’s worth mentioning that Craig Cackowski as the eccentric indie board game craftsman V.V. Stubbs is entertainingly absurd. His motives are a little weak but his wide-eyed grin and dollar-signed eyes make him hilarious.

The film’s soundtrack is relentless and used to great effect. In some scenes, it truly adds to the panic and calculated tension the three friends are going through as they discuss the various means to bury the body. It really reminded me of Tarantino’s work, which allows music to carry the mood or vibe of a scene. I think it could have benefited from more quiet moments, swapping the fast-paced music with more urgency through performance, but this is a minor nit-pick.

Once the cascading events reach the final act, the film wraps up far too hastily. A meeting between Chris and the cop happens off-screen, which is disappointing considering the weight of the encounter was built up earlier on. Plus, Adam killing Barry just comes off as cold in an unenjoyable way. I get Adam was twisted, but it was always within the framework of his own board game, making his actions comically logical. But in the end, his character is just reduced to being greedy, and the speed of how quick it all ends just didn’t work for me—despite the pun with Murder Barry Win, which did get a smirk out of me. It leaves a sour note, as Chris is left to contemplate all that has happened, but this needed way more time to breathe to hit the right cord.

Overall, I want to see more films involving board games. MBW uses an excellent framework and tight writing to bring the best out of what they’ve got. There is more to glean from this type of work, and I think it would be welcomed—especially if the direction of a film replicated the board game as accurately as possible, taking notes from the very beginning of this film. We could see something vastly experimental.

Murder Bury Win is playing as part of the online Another Hole In The Head Film Festival 2020, December 11th through 27th. 5 and 10 film passes, as well as an all-access pass, are available.