There haven’t been many times in my life when a movie disturbed me so much that I had to leave the theater and take a break. One such time was when I saw 2000’s The Cell in a nearly empty theater with my friend. About halfway through the movie, I excused myself to the restroom and while there, gave myself a pep talk about going back inside because, after all, friends get a little irritated when you ditch them because you got freaked out by a movie.

For those unaware, The Cell stars Jennifer Lopez, Vince Vaughn, and Vincent D’Onofrio in a film about FBI agent Peter Novak (Vaughn) who persuades social worker, Catherine Deane (Lopez), an expert at a new experimental therapy procedure, to enter the mind of a comatose serial killer, Carl Stargher (D’Onofrio), to learn where he has hidden his latest victim.

Carl is a seriously screwed up character. Much like Buffalo Bill in The Silence of the Lambs, he kidnaps women, imprisons them in a glass cell that fills with water until they drown, chemically treats their skin after death, and goes through a ritual with their corpses before disposing of them. He even lays in wait for his victims and uses clever ways of abduction (once even using his well-trained albino German Shepherd as a ploy). We find out when Catherine enters his mind exactly why he does this and, of course, it all stems from severe childhood trauma.

Inside Carl’s mind, Catherine is introduced to his inner child and is pulled into a view of his upbringing by a severely abusive father who used religion as a weapon. His father actually inspired Carl’s horrific form of torture by subjecting him to a terrifying baptism when he was just six years old. In this baptism, Carl was held under the water panicking while the congregation’s elders did nothing. The child inside Carl wants to be good, seemingly wants a new beginning, and is looking for Catherine to offer that. She eventually does release him from this hellish kingdom in a particularly beautiful scene.

Perhaps what overshadows the plot of the movie is the twisted imagery that director Tarsem Singh has created for the inside of Carl’s mind. This space is a hellish wonderland of misogynistic perversion and horrific grandeur where Carl is the supreme being subjecting all visitors to his sadistic whims. In one such horrific visual, we see Carl torturing Peter by winding his intestines on a spit after Peter takes the hero’s way and enters Carl’s mind to try to pull Catherine out of this nightmare after she gets lost and is destined to become a permanent queen of Hell.

The colors of the hellish landscape inside Carl’s mind are breathtaking and paint an interestingly convoluted story. The audience almost feels drawn in by the comforting bold colors and beauty of the scene. But once we’re here, Singh turns everything upside down and begins making the viewer feel very uneasy before bringing out the supremely mad version of Carl who is outfitted in elaborate costumes and painted in terrifying detail as the king of Hell. 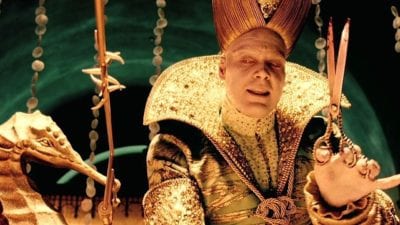 This unease doesn’t exclusively present itself during adult Carl’s sadistic fantasies. When Catherine first meets child-Carl, she follows him into a room where he begins hiding behind a cabinet away from her. She tries to talk to him soothingly and coax him out. The viewer is lulled into a sense of calm until the music and vibe of the scene begin to shift and we are pulled into Carl’s nightmare where a horse that Catherine was petting in the room is suddenly split into segmented parts by glass falling from the ceiling. We are witness to not only the segmentation of the animal but also to the visual of it happening so quickly that the horse is still technically alive—perhaps a representation of Carl’s psychic break. This scene also was perhaps a nod to the controversial Sensation art exhibit from 1997 in which animals were shown segmented and encased in glass.

At the pinnacle of the film, Catherine decides that what she is doing to help Carl isn’t necessarily working when she enters his mind, so she goes against protocol and pulls him into her mind. While inside Catherine’s mind, the viewer is subjected to very different yet still uneasy imagery. Catherine is painted as a nun, or perhaps the Virgin Mary, surrounded by almost Christian symbolism. 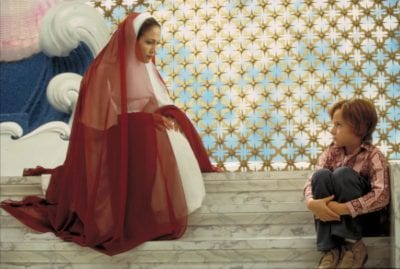 It is in this world that we are witness to the true struggle of good versus evil as predator-Carl works to either kill child-Carl or pull him into his darkness. It is at this time that Catherine is painted as a savior for young Carl. He clings to her in an effort to escape his demented older self. It is in this scene that we see an empowered version of Catherine who dawns an almost Joan of Arc/warrior goddess persona and fights the evil demon that Carl has become. She mortally wounds him with a sword (swords are often used in the Bible to strike down evil) and turns her attention to young Carl, who begs her to let him stay in her serene heavenly atmosphere.

In a callback to his original baptism where it all went wrong, Catherine takes child-Carl in her arms and holds him under the water to release him. He doesn’t struggle but offers himself willingly in an almost Christ-like sacrifice. In doing this, Catherine has vanquished the demon, saved the boy, and rid the world of a monster as real-life Carl dies when dream-Carl does.

Part of what makes this film so terrifying is the idea that this type of psychic break that Carl experiences could happen to any one of us. Carl is a product of his environment—his abusive father, his lack of a mother-figure, his twisted exposure to religion. The mixture of all these factors culminated in something that mentally overwhelmed him and lead him to a break which forced him into a darkness from which he couldn’t recover. After being submissive and tread upon all his life, he created a space where he was dominant and could no longer be hurt.

Singh’s background in advertising and music video direction is an invaluable asset to this film. Every detail from color and lighting to camera jumps convey an instability and unease that keeps the viewer on the edge of his/her seat. You are willingly drawn in by the beauty and artistic direction of each scene yet, once there, the anxiety is nearly overwhelming and adds to the overall surrealism of the movie itself.

I will say that overall, the film is mediocre but did fairly well at the box office in its day. The story of the serial killer who is too-easily caught by the FBI and subjected to an experimental procedure is predictable at best. Yet, the acting on the part of Vaughn and Lopez is solid, and D’Onofrio is chillingly stellar as usual. He embodies the serial killer as few others can. I mean, he forced me out of the theater to hide in the bathroom until I found enough courage to return—that’s talent.

Take the time to view The Cell for the first time or with fresh eyes. I think you’ll find that it holds up 20-plus years later. I’d love to hear your thoughts in the comment section below.