The infamous Necronomicon has appeared in countless books, virtual games, and classic horror films over the decades, including one of the most prominent horror features of all time, The Evil Dead. If some of you aren’t aware of the masterpiece, The Evil Dead tells a story of five college students from Michigan State University who take a spontaneous trip to Morristown, Tennessee, where they rent an old cheap cabin isolated in a wooded area.

While the group unpacks their belongings, Cheryl (Ellen Sandweiss) sits in a room alone, sketching a ticking clock on the wall. The alarm goes off and the clock stops. A chilling breeze from outside of an open window lingers across the room. Cheryl hears a demonic voice calling to her, “join us.” Her hand becomes possessed, forcing her to draw a picture of a strange book with a deranged face. Though Cheryl is fearful that something might be in the house with them, she keeps quiet about it.

During their first dinner toast, a loud noise interrupted them from the door of a cellar pushed open by an invisible force. The three frightened girls stayed behind while Ash (Bruce Campbell) and Scott (Richard DeManicor) do an investigation down in the cellar. At the time of their search, they discovered an archaeologist’s tape recorder in a room along with a creepy ancient book titled Naturom Demonto, roughly translated as the Book of the Dead. 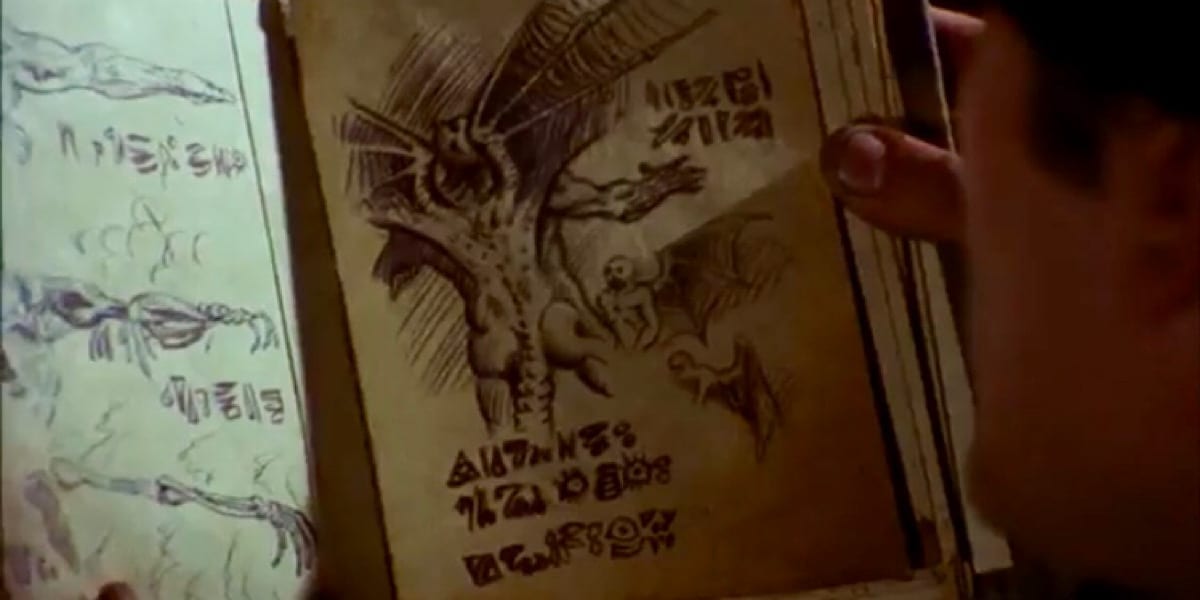 The book is bound in human flesh and inked in human blood. It deals with demons and demon resurrection and those forces which roam the forest and dark bowers of Man’s domain.

The two head upstairs to present the items to the girls. Scott then curiously plays the tape recorder, narrated by Professor Raymond of incantations that resurrects a demonic entity.

We can all agree that The Evil Dead is one of the most influential horror franchises on the planet. The main reason for this is that it demonstrates the ability to maintain a successful low budget production—and also, it delivered a great story that is based on an object rumored to be real. Sam Raimi, director and writer of The Evil Dead, acknowledged that his inspiration behind writing the film was based on the book the Necronomicon. The story was created by American author Howard Phillips Lovecraft, a fictitious weird and horror writer who is also best known for his creation of the Cthulhu Mythos.

The book contains spells of summoning evil entities called The Great Old Ones. However, before, the Necronomicon was titled something else, Kitab al-Azif. Al Azif is an Arabic name for the nocturnal sound made by insects, which is believed to be defined as “the howling of demons.”

It had occurred to me that Lovecraft was not fluent in Arabic words and translations, but nevertheless, it complements the story very well. According to Lovecraft’s “History,” the Necronomicon was initially written by a poet named Abdul Alhazred, (also known as the “Mad Arab”) from Sanaa in Yemen. Abdul Alhazred searched for the hidden knowledge of the occult arts through the ruins of Babylonian tunnels, also called the subterranean secrets of Memphis, where he praised and worshipped the demonic entities Yog-Sothoth and Cthulhu. He lived and spent his last years in Damascus writing the last few pages of Kitab al-Azif. Shortly after the completion of the book, the poet was seized by an evil entity ripping him apart in broad daylight, as witnesses claimed. After his death, there was no sight of the original testament of Kitab al-Azif.

Lovecraft’s story continues to trace the fictional history of the Necronomicon. In 950 AD, a rare copy fell into the hands of Theodorus Philetas, a fictional scholar from Constantinople. Philetas later translated the book into Greek and renamed it, the Necronomicon, or “book of the laws of the dead.” This new accessibility inspired many to experiment with the Necronomicon’s deadly magic before it was suppressed and burned in 1050 by the historical figure Patriarch Michael, who died in 1059. Later, the book was discovered and translated into Latin around 1228 AD by a professor from Copenhagen, Olaus Wormius.

Both Latin and Greek texts were banned by Pope Gregory IX. According to Lovecraft, during the Salem witch trials in 1692, a secret copy of the last Greek version was kept in Salem, Massachusetts, at a private library before it set fire. According to Lovecraft’s “History of Necronomicon” the authentic copies were held in a few selective libraries listed below.

Occasionally, prankers listed mock copies of the Necronomicon for sale in various bookstores. The copies were requested a few times at many libraries, and two are supposedly held at the Vatican Library of Vatican City and the University of Tromsø library in Norway. Some are convinced that the books were locked shut and kept away in a vault, only to be used for scholarly study. They believe that the only way to gain access is at the librarian or archivist’s discretion. There are also allegations that the inside of the book contains instructions on how to summon evil entities from the underworld. Others say that it is written in alien technology and is not intended for human use, that is, it should not be spoken out of human mouths or written by human hands. If anyone attempts to do this, they will suffer horrifying consequences, if they do it correctly.

While some of these allegations may seem true, it is all just a made-up story. But aside from that, Lovecraft did approve of other writers building onto his work and admired everyone for believing in such superstition. In a letter to Willis Conover from Lovecraft;

Now about the terrible and forbidden books—I am forced to say that most of them are purely imaginary. There was no Abdul Alhazred or Necronomicon, for I invented these names myself. Robert Bloch devised the idea of Ludvig Prinn and his De Vermis Mysteriis, while the Book of Eibon is an invention of Clark Ashton Smith’s. Robert E. Howard is responsible for Friedrich von Junzt and his Unaussprechlichen Kulten…As for seriously written books on dark, occult, and supernatural themes—in all truth, they don’t amount to much. That is why it’s more fun to invent mythical works like the Necronomicon and Book of Eibon.

There are a few other stories from Lovecraft that also mention the Necronomicon. My favorite of them all is “The Hound.” The story was created on Sep 16, 1922, after Lovecraft wrote a letter about his experience while attending church with a friend.

Around the old pile is a hoary churchyard, with internments dating from around 1730 to the middle of the nineteenth century […] From one of the crumbling gravestones—dated 1747—I chipped a small piece to carry away. It lies before me as I write—and ought to suggest some horror story. I must place it beneath my pillow as I sleep…who can say what thing might not come out of the centuried earth to exact vengeance for his desecrated tomb? And should it come, who can say what it might not resemble?

After the completion of “The Hound” in February 1924, it was published in an issue of Weird Tales, a well-known horror magazine founded by J. C. Henneberger and J. M. Lansinger in late 1922.

“The Hound” is a very ghoulish, crime-like suspense about the narrator and his fellow roommate as grave robbers. Their mission is to steal objects from the deceased’s coffins for a private exhibition to make money. The two target things like headstones, preserved bodies, skulls, and several heads in different phases of decomposition. Also included are statues, frightful paintings, and a locked portfolio bound in tanned human skin.

One day, the robbers learn about a particular grave in Holland cemetery, which holds a legendary tomb raider within. They travel long distances to the site where they are met with a furious giant hound dog—but despite their danger, the robbers dig for the ancient ghoul where they notice a jade amulet hanging from the neck. They examine it, and after a bit of observation, the robbers recognize the amulet as belonging to the “Mad Arab” Abdul Alhazred. They remove it from the skeleton and flee into the night.  Later, the two are then stalked by howling monsters, which leads to one robber being violently attacked and killed by a mysterious creature. Toward the ending of the story, the narrator goes back to the grave to return the item to its owner, but it’s too late. The ghoul opens its eyes, grabs his hand, and howls. The narrator flees out of the graveyard. As he begins to feel a bit of guilt, strangely enough, he concludes that the only way out will be by committing suicide by shooting himself in the head with a revolver.

The father of cosmic horror, who Lovecraft is also known as, is a rare horror gem. His originality and eerie imagination inspire us all, proving that horror is nothing other than a paradox of weird imagination. He took risks and changed the game for horror writers to this day, which what makes him a historical figure to the horror genre.

The modern king of all horror, Stephen King, has stated, “Lovecraft […] opened the way for me, as he had done for others before me…it is his shadow, so long and gaunt, and his eyes, so dark and puritanical, which overlie almost all the important horror fiction that has come since.”