Horror isn’t typically a genre audiences see often in movies meant for children. Still, some contain blatantly obvious elements of horror, and others contain horror just beneath the surface. Some of these movies may have scarred audiences for life to some degree. Perhaps looking back, some of the movies you watched in your childhood now contain a warped aspect to them given that, in adulthood, you identify the elements of horror you hadn’t before.

I remember certain movies from my own childhood that gave me the creeps. Some still freak me out a little to this day, mostly because I remember how I felt when I first saw them. That feeling has stuck with me; those movies didn’t exactly make a great first impression. I wonder how these films got away with the content that they did; really, these films should be placed into their own category. For instance, if you’re scrolling through Netflix, you’d come across a new category that’s labeled something like “children’s horror.” Perhaps it’s something for the die-hard horror fan to watch with their kids without going straight into films featuring Freddy Krueger or Michael Myers.

Anyway, without further ado, I introduce you to my realm of childhood horror.

To be honest, I was never a big fan of Anastasia. I hated the fact that she got separated from her grandmother. It always bothered me that they were separated for so long and then only had a brief reunion after so many years of Marie searching for her granddaughter. 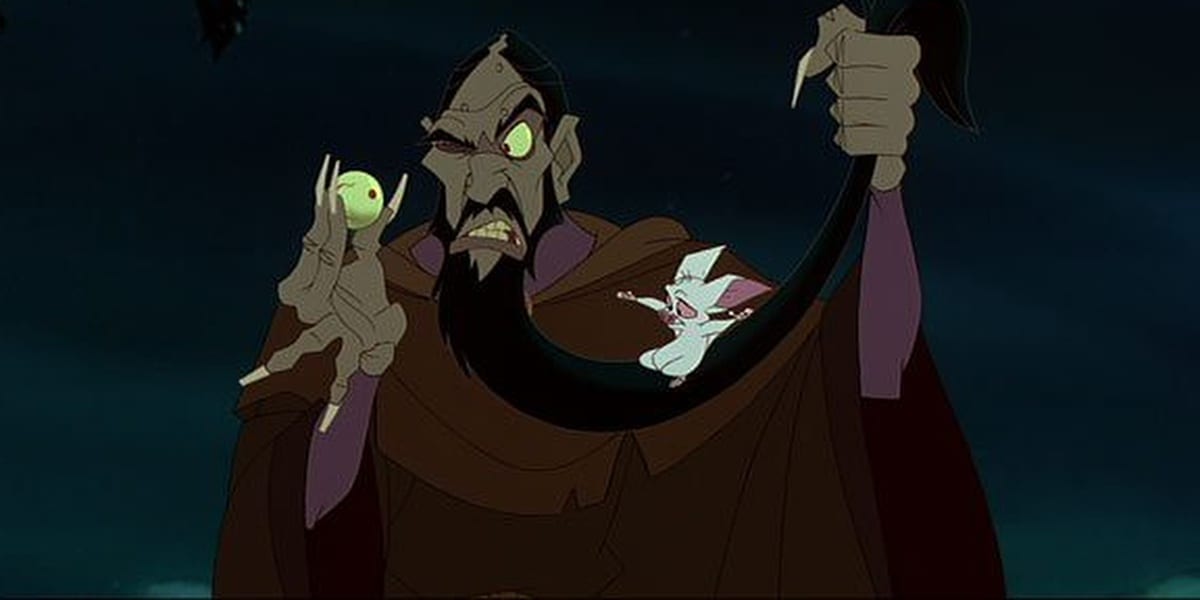 Anastasia mainly creeped me out because of Rasputin. Remember him? Sold his soul to curse the Romanovs? Long beard, could’ve used some sun, moisturizer, and nail clippers? He definitely freaked me out as a kid. The long fingernails especially made me uneasy. I think what freaked me out about him so much was the fact that he just grossed me out. If that was the goal of the filmmakers, then goal accomplished. Having a freaky-looking character that grosses you out is definitely a familiar horror tactic, and Rasputin is one for the books in childhood movies. When Bartok was reunited with Rasputin and the latter was shown to be completely falling apart, his eye popping out of his head and caught by Bartok, then promptly squished back into its socket in one particular moment, it was even worse for me.

I can appreciate the film better as an adult, given its story, but Rasputin still isn’t my favorite. At least Anastasia manages to stop him and avenge her family in the end. Rasputin sacrificed a lot out of hatred, but he got his karma, and Anastasia got her happy ending.

With Mulan, there are different kinds of horror in varying doses. The horror of Shan Yu and the Huns, threatening to tear China apart, immediately comes to mind. Shan Yu and his men each held an evil look about them; they were terrifying to look at. I knew they were capable of a kind of unspeakable darkness that no one wants to believe exists. Just viewing the death and destruction they caused, leaving behind remnants of a village and what must be hundreds of bodies, including Shang’s father and his army, left me horrified and devastated. That in itself was enough to make my blood freeze; it’s the kind of horror that can really happen. It’s the horror of war.

Mulan was facing her own horror as well: pass as a man and successfully be the soldier she was expected to be, or else risk her fellow soldiers discovering her secret and be sentenced to death. Not to mention she’d bring dishonor to her family if she failed. For one terrifying moment after her secret is found out, it looks as though Shang intends to carry out the law and kill her, but he spares her life, as she has just saved his. The pressure she was under was undoubtedly hefty, but she still succeeded, and the whole time she fought to do the right thing.

Okay, I love this movie, I really do. It’s just that there are some elements to it that disturbed me as a kid. Watching the crystal take and essentially trap Kida’s mom for all eternity within the film’s first few moments wasn’t exactly my favorite moment. Accompanied with the terrifying journey Milo and the rest of the team made to find Atlantis, in which they faced the Leviathan among other things, and lost people along the way, was a very different kind of Disney movie compared to what I had seen up to that point. 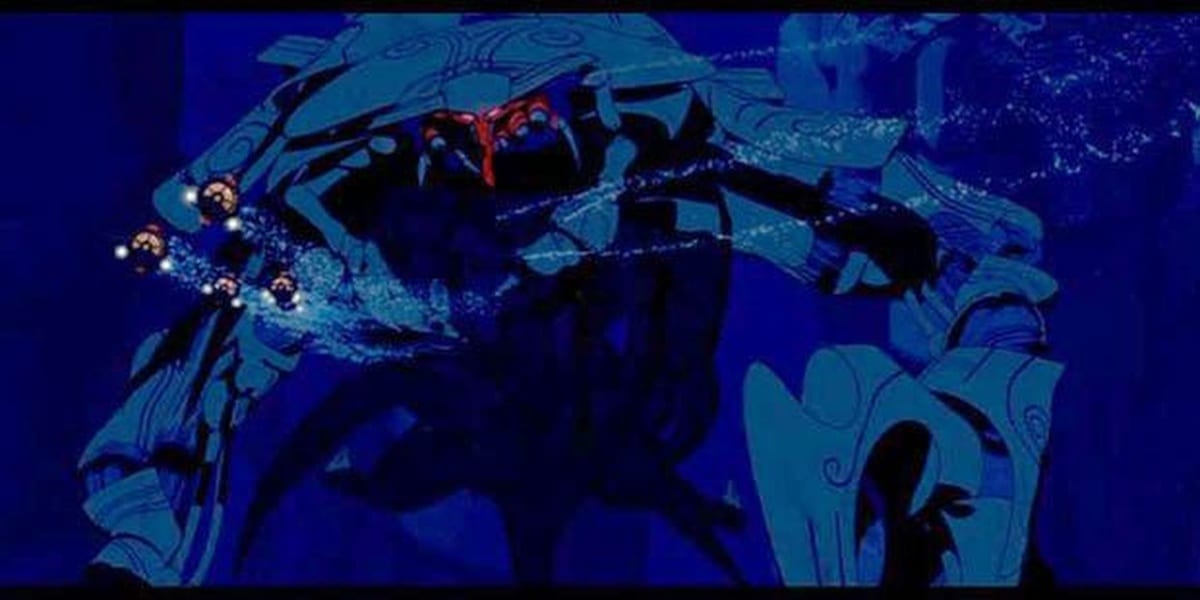 I remember how invested I was as I watched it the first time, feeling like I was exploring the unknown alongside them. I felt the betrayal of Rourke and Helga (though I figured Helga was going to be a bad guy from the beginning, so it wasn’t much of a shock when it came to her). I was worried for a moment there that Kida may have suffered the same fate as her mother, too. But when it all came down to it, the film still managed a happy ending.

I think what scared me about the movie at the time was all the foreign entities that came with searching for Atlantis. The crystal’s powers and taking Kida’s mother, the Leviathan, the deaths of the crew, the dangerous journey, teammates turning on one another—there were a lot of elements of horror and things going wrong throughout the film. Plus, there was the additional fear of the unknown in play as well. Looking back, I see it as a good lesson—sometimes facing the unknown is better than to fear it, but it doesn’t come without sacrifice.

Growing up, I was watching Disney films and others like them. Happy-go-lucky, the bad guy is defeated, fairy-tale galore. When Monster House came out in 2006, I was thrown for a loop. Strangely enough, I was never freaked out by the grouchy old Horace Nebbercracker. It was always the house that gave me chills.

It looked like it should be condemned. It desperately required a renovation. I had seen rundown, abandoned houses before, in movies and real life, but Monster House was on an entirely different level. Possessed by a woman who hated children (as they mocked her relentlessly for her weight), the house was guilty of “eating” any who dared cross its path. 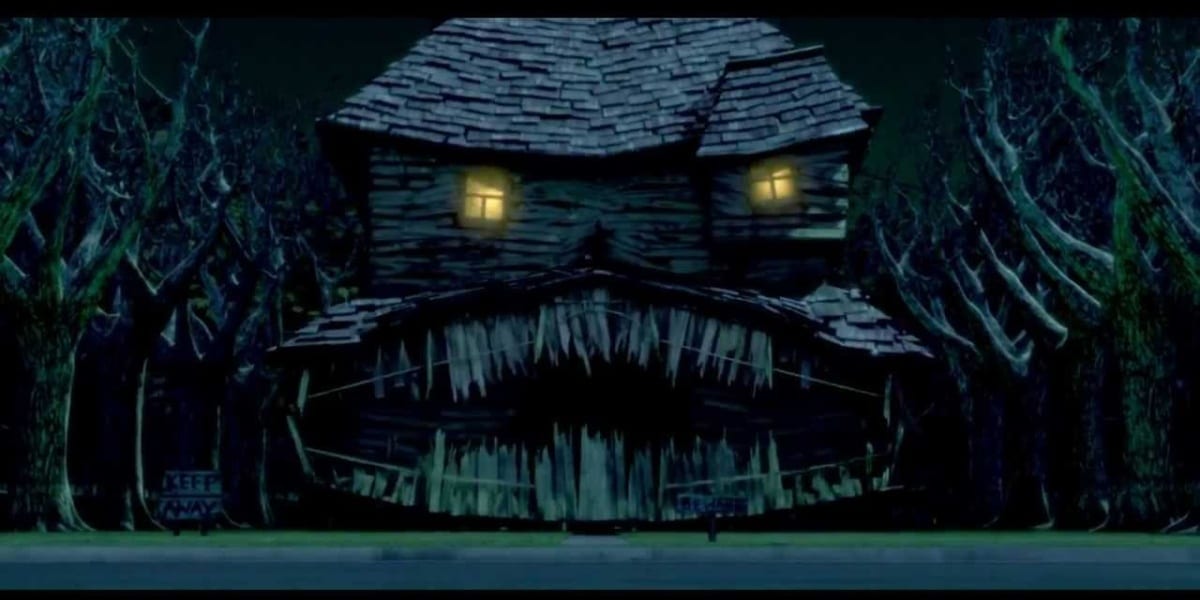 Nebbercracker was never the villain; he was a self-appointed protector of the neighborhood kids, knowing how his late wife felt about them. The shrine to her in the basement is both sweet and terrifying, as you could see the body of Constance, Nebbercracker’s deceased wife, encased in cement. To this day, it still freaks me out, because it’s such a horrible and tragic way to die.

While I could understand why Constance hated kids so much, I also didn’t understand why she couldn’t just adopt her husband’s perspective and see the good and block out the bad. That negativity turned her into a monster, which freaked out kids for many years as a result. The house was a monster feeding off of years’ worth of resentment, bitterness, and anger. It took out all those years of pain on the wrong people, scarring them for life. Though everyone the house “ate” emerged in the film’s conclusion unharmed (at least the movie let the kids watching know that the house’s victims hadn’t been killed), they had to walk away with some psychological trauma. It’s the kind of horror that lingers.

This 1998 direct-to-video film totally detaches from the Scooby-Doo audiences know and love. Usually, when Scooby and the gang come across the villain, they’re just wearing a costume and are trying to cover up some kind of scheme. Nothing about it is ever real.

Watching zombies regenerate and emerge from the ground is pretty graphic for Scooby-Doo. I grew up watching everything Scooby-Doo from the original series to its spin-offs and films—Scooby-Doo on Zombie Island wasn’t what I thought it would be. I recall watching it on Cartoon Network one Saturday morning and feeling shocked, confused, and somewhat horrified—what had happened to Scooby-Doo? 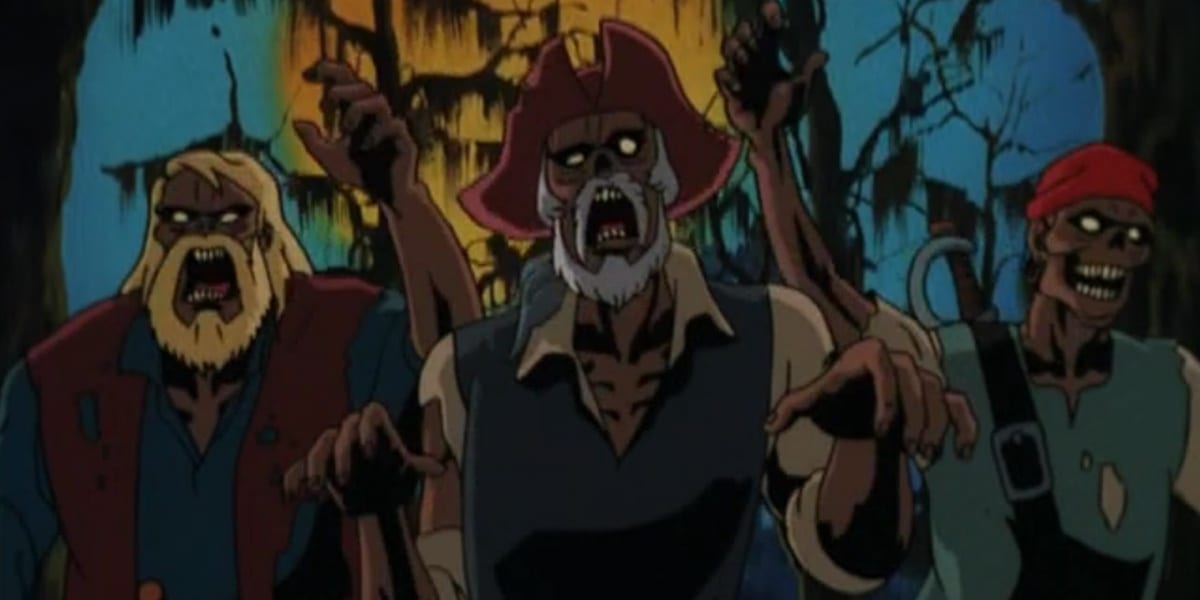 Scooby and the gang seemed too calm as they finally left the island when all was said and done in the film’s ending—wouldn’t they be scarred for life after experiencing some very strange and very terrifying supernatural events? The zombies were the good guys, the spirits of those killed by the immortal cat creatures (who are masquerading as humans), trying to prevent anyone else from suffering their fate. Granted, Simone and Lena had watched their fellow settlers die awful deaths after being driven into the water and off the island by Morgan Moonscar and his pirate crew, but how could they lose their humanity so quickly afterward and kill innocents who had nothing to do with their unfortunate fates to preserve their own lives?

In any case, Scooby-Doo was capable of horror and darkness, two things I previously thought impossible. And just a year later, Scooby-Doo! and the Witch’s Ghost was released, again portraying villains far more dangerous than guys in masks. It’s different compared to the original show, but somehow, both films worked and introduced new storylines for the familiar characters.

Looking for more on children’s horror? We’ve got you:

“Hotel Transylvania: Transformania Is a Delight for Young Monster Lovers”