Having made the first Creep movie with Mark Duplass while still relatively fresh out of film school,  Patrick Brice followed that up by writing and directing the character-driven comedy The Overnight. He has since released a sequel to Creep, a comedy horror film Corporate Animals, and earlier this year signed on to direct an adaptation of Stephanie Perkins’ 2017 novel, There’s Someone Inside Your House for Netflix which is now in post-production. A further installment of the Creep series is in the works, and in between all this he also writes and directs the occasional episode of the Duplass Brothers HBO TV show Room 104. Patrick still found the time to answer some questions for us about the Creep series and his other work.

Had you seen Baghead before starting work on Creep?

For a long time Baghead was the only Duplass Brothers film I’d ever seen! I love that movie. It’s such a fun and unexpected approach to that tone and material. Also, it features the dream combination of Ross Partridge and Steve Zissis. Both of whom are phenomenal and have such great chemistry in the movie. I would watch many many movies featuring those dudes together.

A lot of the tension in Creep comes from the uncertainty of Josef’s motives and sanity. In Creep 2 we know what he is, but that knowledge and expectation is then subverted by the plot. Was one of the primary goals in the sequel to find a way to keep the audience guessing?

We knew going into Creep 2 that the audience had caught up with everything in the first film. We knew we needed to approach the tension of the movie from a different angle. The cat was out of the bag regarding Mark’s character being the killer. Rather than skirting around that we decided to lean into it completely. It helped that we had established in the previous film that he was a pathological liar as well as being a serial killer. 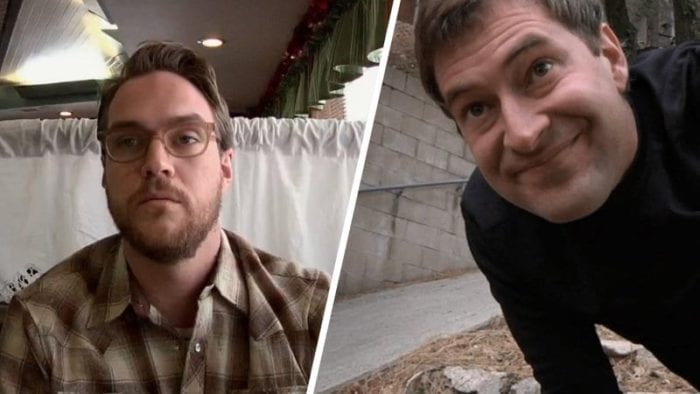 You and Mark “were” Creep 1. Was it a relief to move behind the cameras in 2 or did you miss playing opposite Mark?

I find acting to be incredibly stressful. It was a complete relief to simply be there to help guide and shape Mark and Desiree’s (Desiree Akhavan‎) performances. The intent in bringing Desiree into the fold was to have another voice in the room that was not only thinking about her character but also the form of the film itself.

Given how busy you both are these days, are you ever in the same room anymore? How has the writing process evolved from Creep 1-3?

To be quite honest it’s been tough getting the two of us together over the last year. Mark has been shooting Morning Show and producing and writing his various projects. I’ve been working on this Netflix film with Shawn Levy and James Wan. Usually, we meet up and have spitballing sessions then whoever is less busy goes out and writes a draft or two of the script or treatment. It’s been much more difficult to do that given our current responsibilities elsewhere.

There’s an intimation of Josef being the product of a troubled childhood with all the Peach Fuzz and “tubby” stuff. Was that something you discussed in more detail with Mark and decided to leave vague?

I think with the first movie we were trying to focus on both characters and the situation in an immediate sense. We were truly working moment to moment and scene to scene. Rather than saying we were intentionally “leaving it vague” I’d say we wanted to give ourselves room to explore some of these elements in later movies. Josef’s childhood has actually come up a lot in current discussions about the franchise. It feels so weird calling this a franchise.

Both of these themes emerged kind side by side. We loved the idea of a serial killer having a mid-life crisis. Especially one as emotionally articulate as Mark’s character. We knew from the start we wanted to pair him up with a woman this time as well. And we wanted to keep any reference to sexuality childlike and innocent and odd, not giving anything away if we didn’t have to.

How many ideas and directions did you abandon and can you share any of them?

Honestly I can’t remember any major ideas that we went far enough down the road with. I remember some changes in setting. We initially conceived of a similar story to Creep 2 but set entirely in a coastal town. We had a climax with a bloody fight that took place in the ocean with waves crashing over the two leads. In other words what would have been a production nightmare. 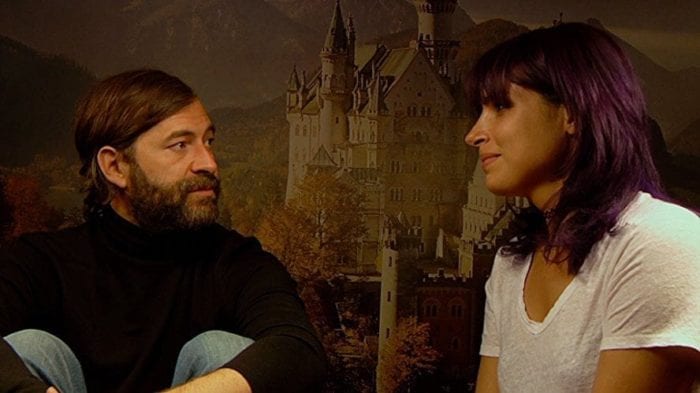 The relationship that develops between Josef and Sara is what drives Creep 2 for me. In Creep 1, you’re wondering how dangerous Josef is and if Aaron is going to survive; In 2—I at least—became more absorbed in the interplay between Josef and Sara, and if he can be redeemed—which is crazy given how many people he’s killed. Was there a conscious intent to try to humanise Josef a bit more in Creep 2, or did it just develop naturally?

We definitely wanted to flesh out Josef’s character in Creep 2 and try and find any way we could to make him temporarily likable or sympathetic. Constantly fighting against and considering the question of Sara’s character leaving the cabin was another big concern. We wanted to keep her there at all costs and knew that need had to come from her character and not in reaction to Josef.

Mark seems to play a sociopath really well going from sweet and vulnerable to unnervingly manic to dangerous maniac in moments. Does that come easily to him?

I can’t really speak to his performances in the Creep films being more difficult than others. Mark is pretty fearless as a performer and is willing to go places that other actors would potentially find uncomfortable.

Did Mark practice his jump scares on you and Desiree during production?

A huge part of the process in making the Creep films is not only thinking of potentially great moments for jump scares but also allowing space for Mark to surprise us with them in the middle of a scene.

Creep 3. Anything you can tell us at all? What direction is it taking? Potential release date?

It’s been a long journey navigating our schedules. Mark is busy doing everything Mark does and I’m currently in post on There’s Someone Inside Your House, a new film I’m doing for Netflix with James Wan and Shawn Levy producing. This new movie is the biggest thing I’ve ever worked on and is kinda my life right now.

“Crossroads“, from this season of Room 104 (Season 3). You worked with Sam Bain on Corporate Animals. How did you come to work with him on this episode?

Sam and I had already been developing Corporate Animals for a year when the opportunity came around for us to work on Room 104 together. He had an idea for an episode in the hotel room involving a Faustian bargain that takes place over a couple of decades. It was very much in his tone but also a little more dramatic and sweet that you’d expect. It was a nice primer for us being in production together. Working with Sam is a dream collaboration. He even makes me tea sometimes.

Given that Room 104 season 4 has already finished shooting, should we expect you to pop up again in Season 4?

I wouldn’t say it’s a huge spoiler to mention that I got to direct an episode for Season 4. It’s a fun one. Written by my friend Julian Wass and starring two legends of television. I hope that show continues on for years and years.

Don’t suppose you can tell us anything about the new film? At all?

I’m really excited about the new one. It’s a slasher movie that’s also emotional and (dare I say) sweet. It was my first time working with young(er) actors and I was so impressed with the new generation. Everyone was so thoughtful and professional and kind. We are in the edit now and I’m thrilled at how it all came out.

Creep 1 and Creep 2 are available to stream on Netflix and Room 104 is available on HBO.