John Carpenter’s 1978 original Halloween was the first horror movie I ever watched. Thanks to English TV channel’s often showing horror films in their 10:40 pm movie slot on weekday’s, that was how I had a whole host of my early experiences watching horror. Halloween was obviously something that stayed with me, the atmosphere, the music, the opening tracking shot all seemed darkly magical. I was frequently being babysat around this period of my life, and may well have developed an unhealthy fear that my temporary caregivers were in imminent danger every time my parents went out.

Going back some forty-odd years later, it’s fascinating how the original Halloween is almost nothing like the inescapable wave of slasher movies that came in its wake. Rather than a wave of creative gore spread across a town, the murders only occur in a couple of houses on a single street. The murders that Michael Myers commits that night feel a lot more like a tragic accident caused by a slip in procedure in care for the mentally ill than the work of a cackling, wisecracking lunatic. There is, of course, Doctor Loomis (Donald Pleasance) with his doom-mongering overlaying the whole thing, but it’s surprising how small and localised the first film feels. It, of course, created a template and Hollywood ran with it. 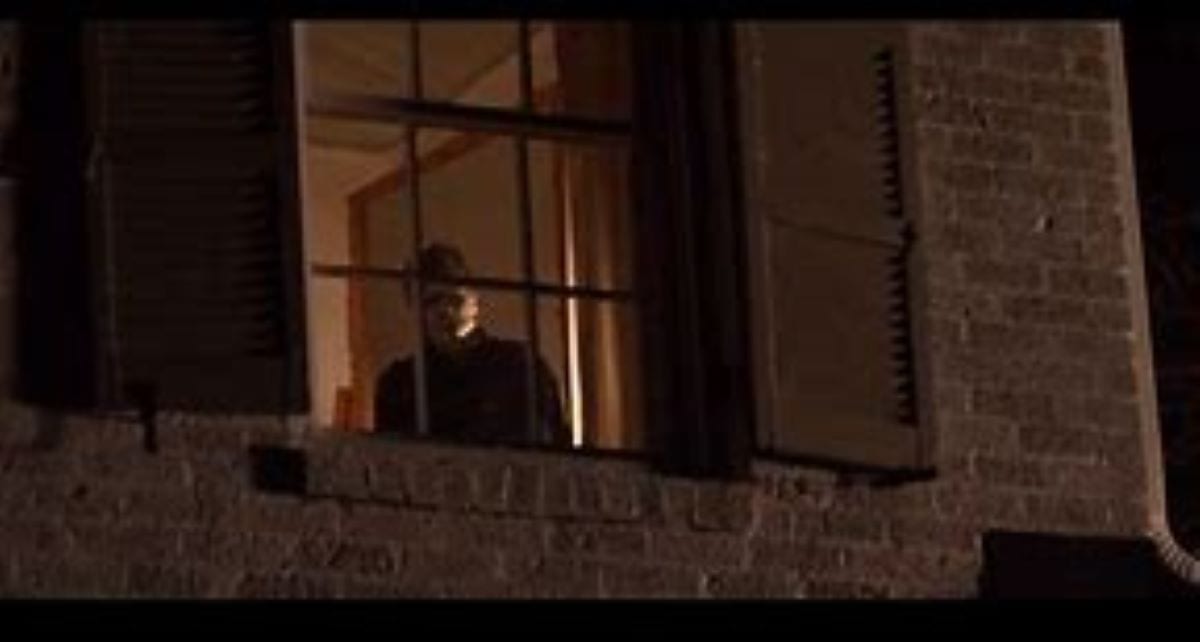 There were of course sequels to Halloween, eight of them if you include the weird attempt at an anthology that was Halloween 3: Season of the Witch (1983). Then there was Rob Zombie’s poorly received but financially successful remake and its bizarre sequel. The sequels saw familial relationship reveals, and then eventually more outlandish plots involving cults, etc to explain Michael Myers’ motivation. It wasn’t until 1998 and Halloween H20 that the original “final girl” Jamie Lee Curtis was brought back into the fold for the first time after the lacklustre Halloween 2 in 1981. I know it has its fans but Halloween H20 has always felt like a let down to me. It was financed and released in the wave after the box office success of Scream (1996) and felt like a rushed cash grab when ironically, it was Scream that was referencing the original Halloween. You only need to look at the posters of the time for Halloween H20 to know that they were looking at a whole new demographic. Halloween H20 never really did anything new with the characters of Laurie Strode or Michael Myers, it was another empty slasher with attractive young stars from the TV in a dull cycle that lasted another five years or so.

It was with trepidation that I approached the announcement of another reboot of the Halloween series. This felt like seriously flogging a dead horse at this point, and there didn’t feel like there was any tread left on those tyres. Then John Carpenter got involved and David Gordon Green (Undertow 2005)—a man once tipped as the new Terence Malick (The Thin Red Line 1998)—signed on to direct. Carpenter stated that Green and co-writer Danny McBride (Eastbound and Down) truly understood the property. Then early word out of film festival screenings late in summer 2018 was overwhelmingly positive. For once hyperbole from the horror crowd at a festival screening was right on the money, because put simply, Halloween 2018 is the best sequel in the whole damn series.

To understand why you have to put yourself in a certain mindset. You have to take the fact that the events in the first movie were actually nothing more than a tragic accident caused by the careless authorities. You have to then also, somehow, pretend that six sequels with Michael Myers and two remakes never happened. So once you are there, it becomes easier to accept that Halloween 2018 is actually the second-best film in the series.

In Halloween 2018 we find the original final girl Laurie Strode, living a life of more or less isolation in Haddonfield. Laurie is living the fairly atypical life of someone who never really came to grips with their trauma. She has alienated her family, she has few acquaintances, and she lives alone. Laurie also has something of a drink problem, hinted at fairly briefly, but it seems to be a fuel to enable her to do simple things like attending a birthday dinner with her family out in the real world. Crucially Laurie Strode has been preparing for something for forty years. Laurie has been preparing for Michael Myers to return. She knows where he is, she can’t get to him, but killing the man responsible for the state of her life will somehow bring her peace, and she stockpiles weapons and fortifies her home in itchy anticipation of her destiny. 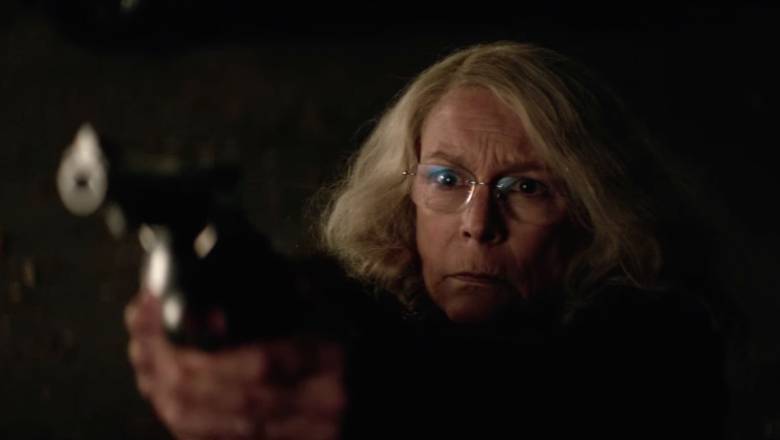 In this sense, Laurie Strode is very similar to a certain Captain Ahab from a well known story about a quest for revenge on a terrifying whale out at sea. The difference here is that unlike Captain Ahab, Laurie Strode is not granted the freedom to pursue her vengeance, this is the modern world after all, and so she waits and she seethes as her relationships fail all around her. Laurie Strode tells all those she cares about that the day is coming when Michael will return, she tells them all that they have to prepare as she has, and that they have to be careful. In a sense Laurie sees her trauma from all those years ago much like someone who lived through more encounters with Michael Myers would in the sequels. Crucially though, her family and friends see the event for exactly what it was, a tragic fluke accident. They do not understand why Laurie cannot simply be grateful to have survived the encounter, and do not recognise the anger that has been building within her.

Thanks to another tragic accident on the road as Myers is being transferred, he of course escapes and then the victims start to pile up again. It’s October 31st, so of course Laurie is twitchy anyway but when she gets wind of it, she knows what’s coming. The people around her still doubt her and treat her much like Chicken Little, but Laurie sees the patterns and knows that death itself is coming for them. The way she reacts is something that gives me a little buzz every time I watch it. The anxiety and the drinking are gone, suddenly replaced with a woman in her sixties brandishing a gun confidently. The hunter has become the hunted. Laurie actively goes after Myers, she is not shrinking, whimpering in a closet waving a knife anymore, she is actively trying to end this. 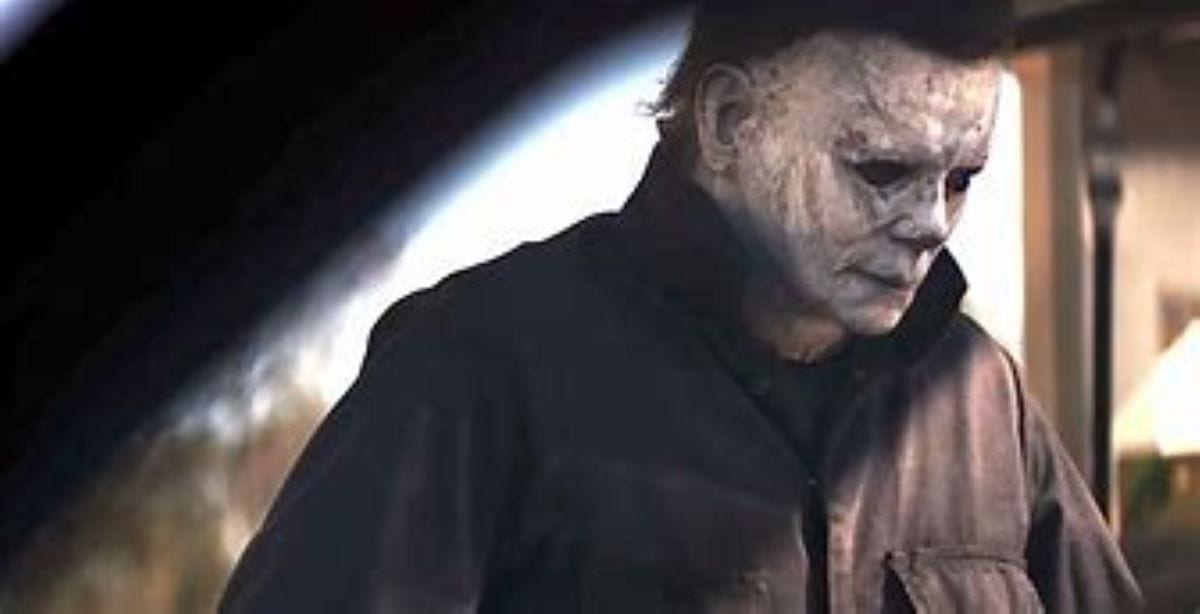 It became clear in the final act what Halloween 2018 was really about. In the wake of Scream, the next dose of meta slasher commentary was all about the archetypes found within the genre. The concept of the final girl became prominent in movies such as Behind the Mask: The Rise of Leslie Vernon (2006), The Cabin in the Woods (2012) and The Final Girls (2015). Halloween 2018 is the reality of that situation, it takes a tragic event and shows you how it would affect someone for the remainder of their life. There is no irony or meta-commentary, it just is the situation as it would be after a tragedy that changed a life. You could make an argument that Scream 2 (1997) maybe dealt with the concept as well, except that Sydney Prescott (Neve Campbell) was still always running away from clumsy ghost face. Laurie Strode has had forty years to get past the fear, live with the anxiety and fantasize over and over about killing the lunatic that ruined her life. Halloween 2018 is the ultimate catharsis for the final girl because we get to see this play out. When they fight, Laurie kicks and screams and attacks just as viciously as Michael, the one thing her life has been about now presented to her. This was never the story of Michael Myers, this was the story of Laurie Strode all along.

In a world not motivated by money, Halloween 2018 would have been the final word on the slasher genre. It feels like a full stop on a sub-genre that has gone up and down in popularity like a yo-yo for nearly five decades. Of course this isn’t the case, Halloween Kills and Halloween Ends have been announced as part of some new kind of trilogy with the same creative team attached. For once I am not dubious about these films and planning to wait for home video, I will be there opening day. Even the title of the planned third film “Halloween Ends” gives me hope. There is something brewing here that could be really special. A cycle of films that treat the victims and survivors with as much attention as the ominous shape that causes all the mayhem. I will return not for the kills and th masks, but for the main character, the final girl, the true heroine for our times.