As a fan of video games, I was keeping my expectations low for The Last of Us adaptation. I can maybe count on two fingers the amount of adaptations that are handled well and properly. Thankfully, Episode 1 “When You’re Lost in the Darkness” was an absolute success, solidifying this series immediately as an A+. Waiting seven days for The Last of Us S1E2 was an exercise in patience, but it completely paid off. Only two episodes in, I have no doubt this series will go down in television history as one of, if not the, greatest adaptations of all.

Without anymore fanfare let’s just right in to The Last of Us S1E2 “Infected” and yes, SPOILERS FOLLOW.

Episode 2 starts deep in the busy heart of Jakarta, Indonesia September 24, 2003. A scientist, Ibu Ratna (Christine Hakim), sits at a table alone eating a salad. Two police officers come into the restaurant and tell her that she is coming with them. In the tense car ride, we find out that she is a professor of Mycology, the study of fungi. When they get to the lab, Ibu is told to examine the contents under a microscope.

Upon a cursory look Ibu inquires as to why the sample of ophiocordycep is prepared in chlorazol (something that is only used preserving samples from humans). What’s also just as interesting to Ibu is that cordyceps can’t survive in humans. After inspecting the specimen, Ibu is placed in a hazmat suit to inspect a body on a slab. This body has a bullet hole in the head, and a bite on the ankle. As if the bite wasn’t enough to catch Ibu off guard, she pulls out a group of tendrils from the corpse’s mouth. 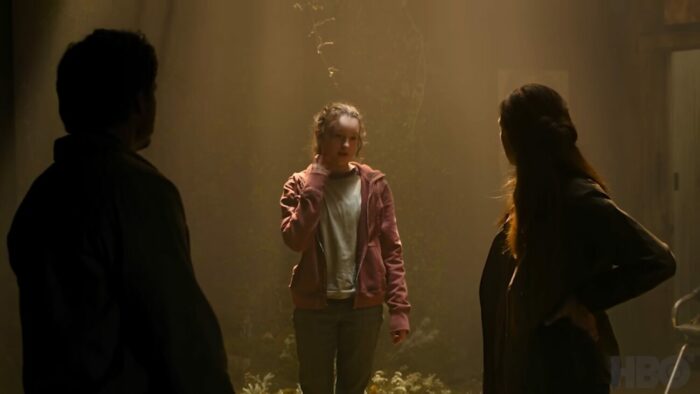 One interesting tidbit I noticed in The Last of Us S1E2 is while Ibu is at the restaurant she is eating a salad. I guess vegetables do save lives. We find out there was an outbreak at the flour and grain factory, which is where the corpse worked. One of the things that saved Joel (Pedro Pascal) and Sarah (Nico Parker) in Episode 1 “When You’re Lost in the Darkness” is how they didn’t eat the cookies Sarah made with the neighbors, and how Joel forgot to pick up the cake. Ibu mentions briefly that flour and grain are perfect substrates for ophiocordycep to thrive in. When the examination is over, the officer who pulled her from the restaurant says they need a cure, or a vaccine. Ibu tells them the only cure is to bomb Jakarta.

I really love how the first two episodes have started. While the conduit for infection has slightly differed from the game, I don’t think it takes away from the concept as a whole. Episode 1 starts us with the talk show about the idea of fungus based infections, and how deadly they can be. The Last of Us S1E2 starts us with scientists discovering there is something evil lurking in the land that can easily take over people. If you have played the game you already have an understanding about the spread of the virus, but if you haven’t these two opening scenes are perfect pieces of the unfortunate puzzle for you to put together.

Back in the present Joel, Tess (Anna Torv), and Ellie (Bella Ramsey) rest, as they prepare to continue their expedition. They converse and question about what Marlene’s (Merle Dandridge) true intentions with Ellie really are. Ellie confirms it is because Marlene thinks they can make a cure with her blood, Joel has a hard time wrapping his head around this idea by constantly insisting that Ellie will in fact mutate. It’s time to get back on the road, and it’s one step closer to Joel and Tess getting their car battery.

Instead of taking the short way to the Old State House, they decide to play it safe and go the long way. In order to get a view of their path, they decide to detour through a hotel to get a bird’s eye view of what lies ahead. When we get inside the hotel we get a bit of information from Ellie about how she can’t swim, which is a huge plot point in the game. It really must be said, and will probably be said tons of times, the set design here is impeccable. Not only does the world feel [un]lived in, it truly looks like an overrun and overgrown world. It’s one of the greatest post-apocalypse sets I have ever seen. They get up to the 10th floor of the hotel, only to find their route blocked by debris. Tess climbs through the debris and clears a path behind a locked door for them to get through.

Once in the room our intrepid survivors look out over the balcony, only to see at least a hundred infected laying on the ground in front of a row of houses. Ellie makes a point to say it looks like all of the infected are somehow connected. Tess agrees with her, telling her that if you step on a patch of cordyceps it can wake a dozen affected somewhere else. Almost like there are electrical charges or communication through a large underground network .

Since they cannot go the route they had planned, they decide the next best thing is to go through the museum. Upon getting to the museum, they see the edifice is completely smothered in fungi. With a tentative step, they go inside. Nearly right inside the front door is a freshly mutilated corpse, though it does not look like something done by an infected. While the infected are the main antagonists in this, I really think they are doing a great job of setting up more outside forces that will inevitably come across their paths. 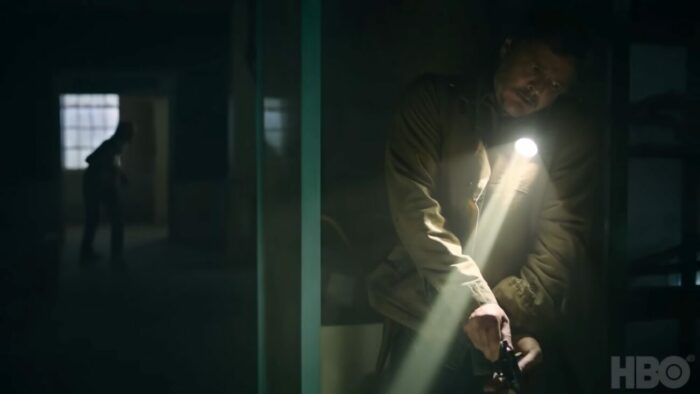 After slowly making their way to the top floor of the museum, the ceiling near immediately collapses. Seconds after that we get the ominous sounds of the one and only…Clickers! Joel mouths to Ellie, “they can’t see, but they can hear.” But after a sharp inhale from Ellie, their cover gets blown. Joel fights off one of the two Clickers, letting Tess whisk Ellie to safety. Though seconds after their escape Tess trips, bringing Ellie tumbling down with her. After a bit of cat and mouse, Joel finally succeeds in getting of the Clickers eliminated. Then, with help from Tess and a hatchet, they finally get the second Clicker out of commission for good.

I know we had brief images of Clicker’s in some of the trailers, but I was really looking forward to the first real look that we got of them. Boy, was it worth the wait. The practical effects on these Clickers are absolutely gorgeous. Each crease and fold in the fungus on their head tells a different story. I had always wondered, when playing the game, what this would look like if it were a film/show and it did not disappoint. Add on top of that the movement of the Clickers, who must have gone to the Javier Botet school of movement, and you have some truly terrifying infected.

It turns out during this whole scuffle, Ellie has incurred another bite from one of the Clickers. But that’s for them to worry about, when it’s time to worry about it. Tess also sprained her ankle during this whole debacle. This all leads to Joel having a very negative outlook on the whole situation, which pisses Tess off. Tess tells him to focus on the good news, and the possibilities of what all this can mean. Joel, tentatively, decides to move forward.

We finally arrive at the Old State House here in The Last of Us S1E2, only to find the Fireflies’ vehicle shot up, with a body brutalized outside of the driver’s side door. A trail of blood leading inside the building doesn’t do much for their morale either, as all of the Fireflies are dead. Joel hypothesizes that one of them must have gotten infected, which lead to an all out firefight…with no winners on either side. One of the bodies starts to move, leading Joel to put one right between its eyes. As the body thumps back down to the floor, cordyceps slowly start to wrap around its fingers. This causes the a hoard of infected to wake up, and rush the Old State House.

While the hoard rushes them, Ellie realizes…Tess is infected. A truly heartbreaking, and supremely unexpected, moment. In order for Joel and Ellie to make their escape, Tess tells them to make a run for it as she starts tipping barrels of gas and throwing grenades on the ground. As the hoard nears the building Joel and Ellie sprint away, in hopes to get to Bill and Frank’s place; Tess makes Joel promise he will take Ellie there.

The hoard of infected burst through the door running all throughout the building. One of the infected (Philip Prajoux) stops and looks right at Tess. He walks over slowly, maintaining eye contact the entire time. Tess’s lighter isn’t lighting, even as the infected man gets face to face with her. The infected man leans in, tendrils fidgeting out of his mouth, and he kisses Tess. Thankfully her lighter finally sparks and she blows up the Old State House, eviscerating all of the hoard. The final shot of the episode is Ellie standing in front of the smoking Old State House, sad…but not defeated. 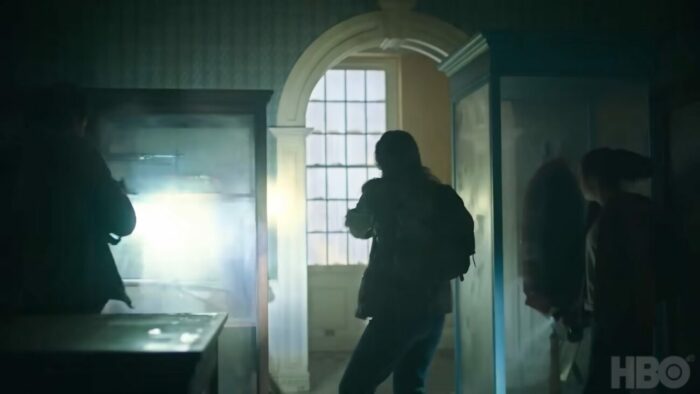 Okay so I thought it was definitely an interesting choice to completely change how Tess dies. In the game she dies defending Joel and Ellie from FEDRA, allowing them to make their escape. Even if they changed the scenario, her death still brings emotional impact. Tess has this way of grounding Joel, but this is also how/where Joel and Ellie are finally really able to create their relationship going forward.

The Last of Us S1E2 really does a good job at forwarding the story perfectly, and giving us enough pieces of information to form the story and ideas for ourselves. There are enough minor changes to keep the people who played the game on their toes, but not enough changes to really take the story in a different direction. On top of all of this, the acting is superb. I can already see the relationship building between Joel and Ellie, and it will be interesting to see how Pascal and Ramsey handle this on an acting level. As I write this Episode 2 holds a 9.9/10 on IMDb, and I think it is beyond well deserved.

More From: The Last of Us