In my opinion, horror comedy is probably the most difficult horror subgenre to pull off. Not only do you have to do everything a horror film is supposed to do, but you also have to do everything a comedy is supposed to do, so you essentially have twice the work. That makes for a really difficult task, so as much as I love horror comedies, I’m always a bit hesitant going into them. And Sorry About the Demon was no exception. While I thought the trailer looked great, I wasn’t sure how well the full movie would balance its two genres. I tempered my expectations a bit, but after finally getting the chance to see the film, I’m happy to report that my trepidation ended up being entirely misplaced.

Sorry About the Demon was written and directed by Emily Hagins, and it stars Jon Michael Simpson, Jeff McQuitty, Olivia Ducayen, and Paige Evans. It’s about a young man named Will who was recently dumped by his girlfriend Amy, so he has to move out of her apartment. Luckily, he’s able to find a cheap new place pretty quickly, but there’s a catch. Unbeknownst to him, his new house is haunted by a demon that wants a human sacrifice, and the place’s owners made a deal with the entity to give it exactly what it wants. See, the demon initially chose their daughter to be its victim, but it gave her back to them after they promised to find someone better for it. That better victim is Will, so now he has to navigate this supernatural threat in addition to his post-breakup blues.

Right from the opening scene, Sorry About the Demon masterfully blends laughs and scares in a way most movies only wish they could, and it maintains that nearly perfect balance all the way through to the end. This film is both absolutely hilarious and pretty damn creepy, and it switches back and forth between the two vibes seamlessly. 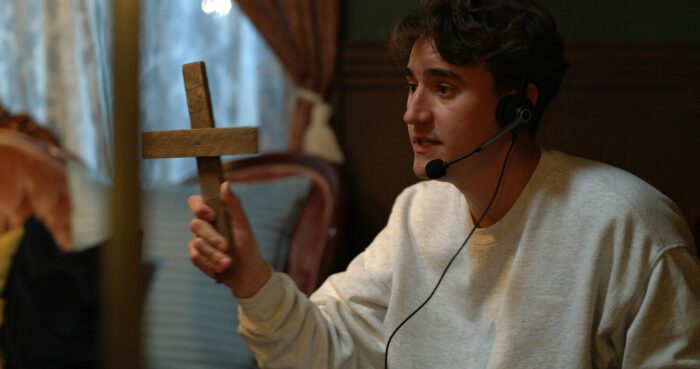 In the hands of a lesser filmmaker, the horror and the comedy would clash and diminish each other at least a little bit, but not here. Director Emily Hagins inserts jokes into the horror scenes and puts spooky moments in the more comedic scenes without breaking a sweat, and she does it in a way that’s both totally natural and totally effective. None of the gags or scares in this movie ever feel out of place, so if you’re wondering how well the horror and the comedy will mesh, I can assure you there’s nothing to worry about. In that regard, Sorry About the Demon is pretty much perfect.

In fact, I’d say that’s probably the best thing about the film, but it’s not the only thing Sorry About the Demon gets right. It also features a really great protagonist in Will. He’s played brilliantly by Jon Michael Simpson, and he almost single handedly makes this movie great.

Simpson makes Will amazingly sympathetic, so when the character is down in the dumps about his former girlfriend, you can’t help but feel your heart break for him a little bit. Similarly, when he finally regains some of his former happiness, you feel happy too, and you want him to fully get back on his feet. What’s more, Simpson’s comedic chops are also spot on. His timing and delivery are just about impeccable, so when he’s supposed to be funny, he totally nails it.

The rest of the cast in Sorry About the Demon is pretty good too, but they don’t get to show off their acting skills nearly as much as Jon Michael Simpson. They do the best they can with the material they’re given, but this is very much Will’s movie. The other characters are basically just there to fill out the story and populate Will’s world. 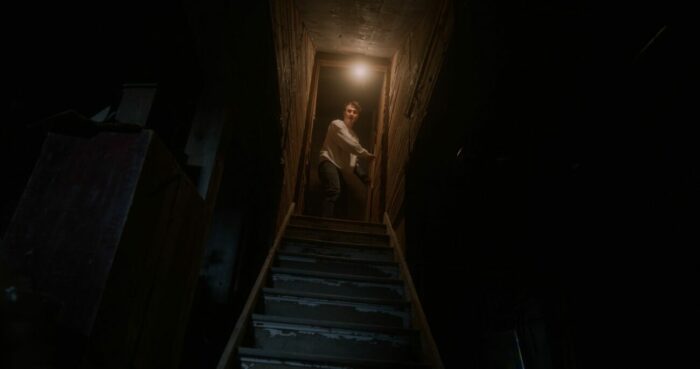 Last but not least, let’s talk a bit about the film’s ending. I’m obviously not going to spoil what happens, but I will say that Sorry About the Demon ends exactly how it should. It brings the story full circle in a really heartwarming way, so not only is this a great movie, but it’ll also leave you feeling all warm and fuzzy inside.

Moving on to the negative side, I have to be honest, I don’t really have much to say here. Sure, no movie is perfect, so if I wanted to go through this one with a fine-tooth comb and look for small things I could nitpick, I bet I could find something to complain about. But on my first watch, I was just so engaged with the film that nothing about it bothered me.

So if you’re looking for some good new horror to watch, I highly recommend Sorry About the Demon. It’s an absolutely masterful blend of horror and comedy that works on just about every level. It’s creepy, it’s laugh-out-loud funny, and it has a super engaging and sympathetic protagonist who you’ll care about pretty much right from the get-go. In a word, this movie is really, really good, so even though I obviously have no idea if it will end up on my top 10 list come December, I have a hunch that it’ll at least be in contention for a spot.

Sorry About the Demon will be streaming exclusively on Shudder on January 19, and in the meantime, be sure to check out Alix Turner’s interview with director Emily Hagins.