This week on the Horror Obsessive Podcast, we’re discussing one of JP Nunez‘s guilty pleasure favorites, Roy Ward Baker’s anthology cult classic, The Monster Club. In this episode, we’ll detail our favorite songs from the film about a human invited into a lounge for monsters, rank the segments, and try to remember the inter-monster breeding chart from memory (what the hell is a humgoo anyway?). Meanwhile, you can hear JP rolling his eyes at me for having only seen the film twice, beginning with an episode of The Last Drive-In from last year.

We begin this episode with our favorite stories on the website right now, mine being Andrew’s Walking Dead coverage, which had a little behind-the-scenes twist of its own this week ahead of the series finale premiering Sunday night. I also mention how off the rails the Amityville series has gone having introduced a Thanksgiving entry (aptly titled Amityville Thanksgiving), and how our own Jay Rohr discussed the film as being “cringeworthy content” while also saying it could be “a strange treat on Thanksgiving” when mixed with the appropriate crowd or after dinner beverages. And JP dishes on The Menu ahead of his now-released review. 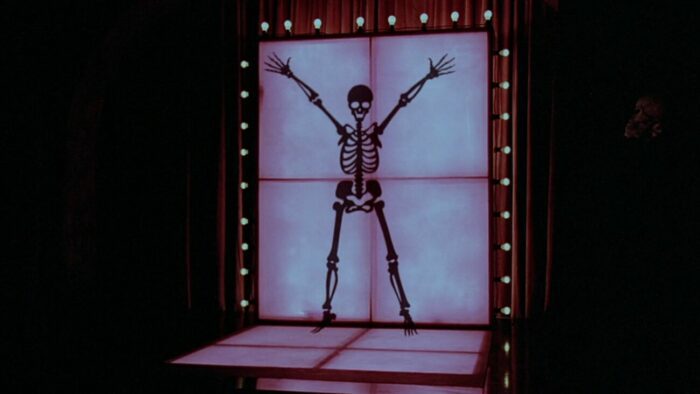 JP and I always have a lot of fun talking about movies and giving our adverse opinions, and our Monster Club episode is no different. I call JP’s favorite actor, Vincent Price, “a bit of a ham” to his face. Also, JP breaks down why a whistle is a terrible monster power and somehow goes so off the rails, discussing people like William Malone, Bond girl Britt Eklund, the short-lived Hammer House of Horror television show, and why the Poltergeist trilogy is cursed, with no idea of how we ever arrived there.

We hope you’ll join us as we converse about this monster-mashin’ horror comedy, and check back with us in two weeks when JP and I get into the spirit of Holiday punishment when we discuss the night he came…down the chimney in Silent Night, Deadly Night.