This article, written by JP Nunez and read by Neil Gray, is now available on Horror Obsessive Radio.

Just like everything in pop culture, horror goes in cycles. Subgenres rise and fall in popularity, so different eras are known for different kinds of horror. To take some of the most obvious examples, the 1930s are known for monster movies, the 1980s are known for slashers, and the 2000s are known for terrible remakes of beloved classics (I’m only partially kidding with this last one). It’s pretty much always been that way, so it’s not surprising that one particular subgenre dominated the 1950s horror world so much that the decade has become almost synonymous with it: sci-fi horror.

This era was chock-full of alien invasions, giant monsters awakened and/or mutated by nuclear testing, and anything else filmmakers could conceivably base in something even remotely resembling real science, so while these weren’t the only horror movies being made in the 1950s, they’re hands down the ones most people associate with the decade. And you know what? They’re fantastic.

Sure, they don’t hit modern viewers in quite the same way as they hit their original audiences, but they make up for their dated scares with some amazing storytelling. There’s a reason why many of these films have endured for seven decades, so if you’re not familiar with this era in genre history, you need to change that. Right now. To help you get started, I’ve compiled a list of five of my favorite sci-fi horror films from the 1950s, so let’s dive right in and take a look at some of the tasty cinematic treats this decade has to offer us.

The Thing from Another World 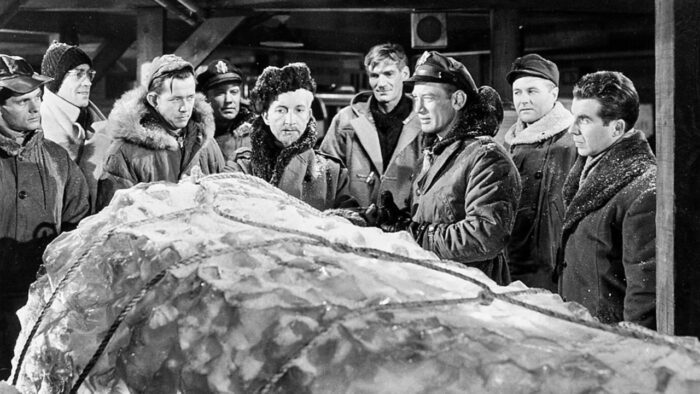 First up, we have the 1951 gem The Thing from Another World. These days, this film is probably most famous for being remade into John Carpenter’s The Thing, but even though it’s been surpassed and overshadowed by its remake, this is still a genuine classic in its own right. It’s about a military crew that discovers an alien frozen in the Arctic ice, and when the thing thaws out, it wakes up and goes on a deadly rampage.

On the surface, The Thing from Another World may sound like just another creature feature with a monster that simply happens to be from outer space, but there’s a lot more to this film than just the bare-bones plot synopsis. It’s a bit of a slow burn, so it doesn’t drop us into monster movie territory right from the get-go. Instead, the film takes its time setting up its characters and their inevitable fight for survival against the titular alien, and everything about that setup is super well done.

Most notably, the pace is just about perfect, the characters feel like real people, and the mystery behind their big discovery is quite intriguing, so your eyes will be glued to the screen well before the thing wakes up and goes on the attack. Then, when the horror finally does pick up, the film manages to maintain that same level of quality the rest of the way through. Everything it gets right in the first half continues into the second half as well, and it also adds some really cool horror on top of the intriguing human drama.

That’s pretty much the perfect recipe for success, so it’s no wonder that John Carpenter wanted to remake The Thing from Another World. This isn’t just one of the best sci-fi horror films of the 1950s. It’s one of the best horror movies ever made, so even though it’s not quite as good as Carpenter’s remake, it’s still an absolute must-watch for any fan of classic genre cinema.

The War of the Worlds 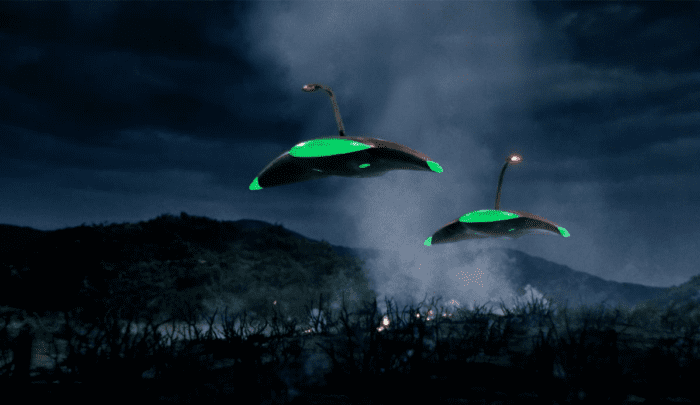 As you can probably guess, The War of the Worlds is an adaptation of the beloved H. G. Wells novel of the same name, but it changes the setting from Victorian-era England to 1950s California. Like the book, it’s about an alien invasion that humanity is helpless to stop, and in my opinion, it’s the best cinematic version of this classic story.

So what makes this movie so great? Well, there are a few things. For starters, it features some of the best special effects of the entire decade. Sure, they look a bit dated today, but they were top-notch at the time. Hell, even now, they’re still pretty impressive when you consider the technological limitations of the 1950s, so if you’re a fan of great practical effects, I think you’re really going to enjoy this movie.

Secondly, and just as importantly, The War of the Worlds also does an amazing job of building up its extraterrestrial threat at the perfect pace. At first, you’re not entirely sure what’s going to happen, but as the story continues, you quickly realize that you’re watching a deadly invasion. These aliens mean business, and even though humanity tries to fight back, it soon becomes clear that we’re woefully outgunned.

That progression from seemingly harmless meteor crash to unquestioned world domination is fascinating to watch, and the award-winning special effects bring it to life in striking fashion. It’s the perfect marriage of a great idea with equally great execution, so if you’re looking to get into 1950s sci-fi horror, The War of the Worlds absolutely has to be on your list of films to check out.

Creature from the Black Lagoon 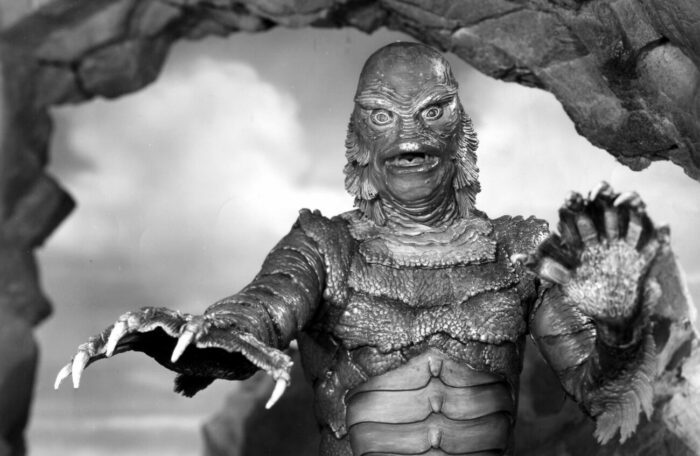 Creature from the Black Lagoon is often lumped together with films like Dracula and Frankenstein, so most people mistakenly think it was made in the 1930s or 1940s. However, contrary to popular belief, it actually came out in 1954. It’s grouped with those other classics because it’s an old Universal monster movie, but it represents a different era of filmmaking for the studio. Nevertheless, this film does have a similar enduring quality to it, so while it wasn’t really part of Universal’s first wave of horror hits, it still more than deserves its place alongside them in the pantheon of timeless genre classics.

Pretty much everything about this movie is damn near perfect. But for my money, the best thing about it is the titular creature, commonly known as the Gill-man. He’s an amphibious humanoid who lives deep in the Amazon rainforest, and unlike a lot of monsters today, he’s not actually evil. He’s just an animal minding his own business in his natural habitat, and the human characters are the ones intruding on his territory. You can’t really blame him for being aggressive, so despite his menacing reputation in pop culture today, he’s actually one of the more sympathetic monsters in the horror pantheon.

That alone makes Creature from the Black Lagoon way more than just another paint-by-numbers creature feature, and when you combine it with everything else the film gets right, including its believable characters, beautiful underwater cinematography, and gripping moments of tension/suspense, it becomes arguably the best sci-fi horror movie of the 1950s. It’s just that good, so if you only watch one film on this list, my recommendation would definitely be Creature from the Black Lagoon. 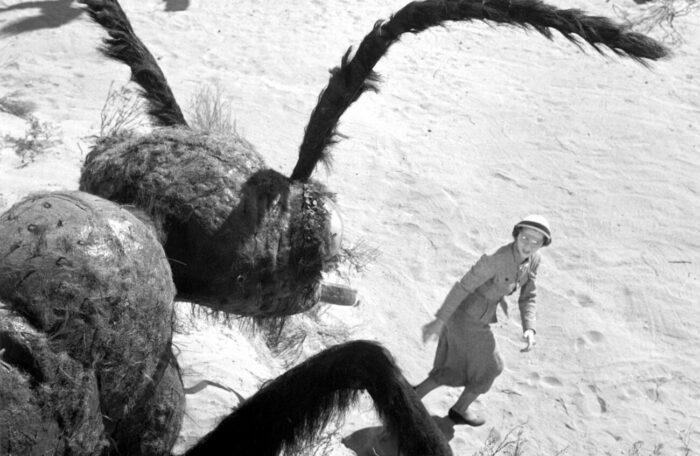 With a name like Them!, you might expect this to be just another cheesy creature feature, but trust me, it’s actually one of the best sci-fi horror films of the 1950s. It’s about a town that’s beset by a group of giant irradiated ants, and when two young queens fly away to form their own colonies, a nationwide search for them and their nests ensues.

There’s a ton to like about this movie, like its fun monsters, likable characters, and thrilling suspense, but in my opinion, the best thing about it is the mystery surrounding the giant ants. See, the film starts off with a series of perplexing deaths, but it doesn’t tell you what’s behind these tragedies. All you know is that they occurred under some very strange circumstances, and the more you learn about them, the more puzzling this situation becomes.

It’s an absolutely fascinating mystery, and every time this mystery deepens, it draws you in more and more. You can’t help but want to know just what the hell is going on here, so your eyes will be glued to the screen the entire time. Then, when the movie pulls back the curtain and reveals its secrets, you’re already totally hooked, so you’ll need to see how the rest of the story plays out.

It’s a great narrative structure, and when you combine it with the film’s other strengths, it makes for arguably the best giant bug movie of the decade. It was a staple of my childhood (yes, I grew up watching horror movies the way normal kids watch Disney movies), and it’s still one of my favorites now that I’m an adult, so if you’ve never seen Them!, I highly recommend that you remedy that as quickly as possible. 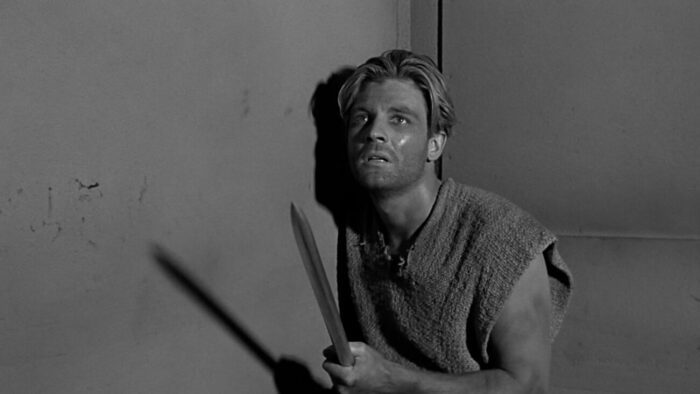 Last but definitely not least, we have the 1957 gem The Incredible Shrinking Man. As its name suggests, this film is about a man named Scott who begins to shrink after being exposed to a radioactive mist. At first, his clothes are just a bit loose, but by the end of the movie, he becomes so small that he has to face off against a (normal-sized) tarantula in a fight to the death.

It’s a really tragic story, and the film does a great job of showing just how much Scott’s strange condition weighs on him. It makes him feel like less of a man and less of a human being, and it’s absolutely heartbreaking. You can’t help but feel for the poor guy, so your eyes will be glued to the screen as you watch him shrink away to almost nothing.

On top of that heart-rending existential horror, The Incredible Shrinking Man also features one of the coolest “man vs. bug” scenes in cinema history. Scott’s fight with the tarantula is thrilling and suspenseful, and while the effects are obviously dated, they’re still pretty impressive when you consider that the movie was made almost 70 years ago.

When you put that all together, you don’t just get one of the most unique sci-fi horror films of the 1950s. You also get one of the best, so even though it doesn’t have the kinds of scares we normally associate with the genre, it nevertheless packs a heavy emotional punch that will stick with you well after the credits begin to roll.