Sometimes the best movies are the ones you never saw coming. They sneak up on you and surprise you in the best way possible, and when I first heard about They Crawl Beneath, I thought this had the potential to be that kind of film. The trailer promised a super fun creature feature that looked right up my alley, so when I got the chance to review it, I jumped on it right away.

They Crawl Beneath was directed by Dale Fabrigar, and it stars Joseph Almani, Karlee Eldridge, and Michael Paré. It’s about a man named Danny who’s visiting his Uncle Bill for Thanksgiving, and while there, they decide to do a bit of work on an old car Bill is fixing up. However, while they’re both under it, an earthquake hits the area and causes the car to fall down on them. The accident kills Bill and traps Danny, so Danny has to use all of his wits to get out. What’s more, the earthquake also releases terrifying creatures that look like miniature graboids from Tremors, so Danny has to fend them off as well as he tries to free himself from under the car.

Right from the get-go, They Crawl Beneath has a very “direct to video in 2005” kind of feel to it. While plenty of great movies debut on VOD and streaming services these days, skipping theaters back in 2005 was pretty much a death sentence for a film. Sure, it might be dumb fun, but it almost certainly wouldn’t be good, and They Crawl Beneath definitely fits that mold. 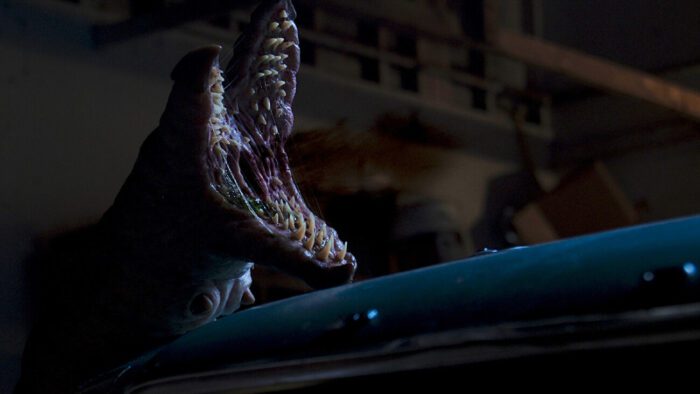 Most notably, the acting and the dialogue are pretty hit or miss, and there are even a few brief exchanges that don’t feel like real human conversation. In fact, the whole first half feels like the movie is just going through the motions of setting everything up without really caring about doing it well. Granted, I’m sure the filmmakers behind it actually cared a whole lot, but the storytelling and character-building just weren’t all that convincing.

Because of that, I had a really tough time caring about the characters or the story, but I was actually okay with it. I didn’t expect They Crawl Beneath to be an Oscar-worthy masterpiece. I just wanted to have some fun with some cool monsters, so I had no problem with its first-act weaknesses. I figured the movie would begin to shine when it finally got to the “good stuff,” so I was more than happy to trudge through some boring parts in the beginning.

Unfortunately though, that “good stuff” never really came. Sure, the graboid-like monsters were super cool, and I had a ton of fun with them whenever they were on screen. They’re brought to life by excellent practical effects, and everything about them, from their look to the way they move, is just pure B-movie gold.

But for some reason, They Crawl Beneath isn’t really about them. It’s primarily about Danny’s struggle to survive in his uncle’s garage, and the monsters are only a small part of that. For example, he spends a lot of time trying to get out from under the car, and when he finally does, he finds that he’s locked inside the garage. What’s more, the monsters are highly venomous, so when Danny gets bitten by one of them, it sets off a race against the clock as well. Not only does he have to get out of that garage, but he has to get out soon, or he’ll die from the venom. 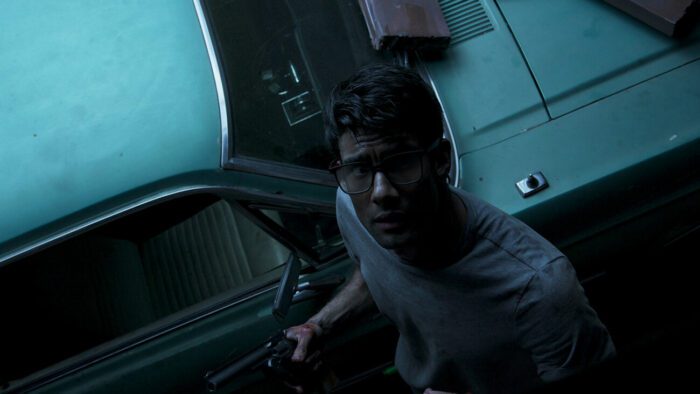 To be fair, none of that automatically means the movie is bad. A fight for survival against non-monstrous hazards can be really good (like it was in Fall earlier this year), but unfortunately, it doesn’t work here. Danny’s struggle to get out from under the car and then out of the garage was just really boring, so it simply took screen time away from what should’ve been the real star of the show. In fact, I’d say that I spent way more time wishing the graboid-like creatures were on screen than I did actually seeing them, and that’s never a recipe for success.

On top of that, They Crawl Beneath also tries to add an emotional layer to its story, and unsurprisingly, this too falls completely flat. I won’t bore you with the details, but it involves some unexpected revelations from Danny’s past, and it deals with his growth as a person. On paper, that may sound interesting, but since I didn’t care about Danny (or any of the other characters, for that matter), I didn’t care about seeing him grow and develop. So in my eyes, his arc just served to take more screen time away from the one thing that actually works in this movie.

At the end of the day, I think the best way to describe They Crawl Beneath is to say that it’s a huge missed opportunity. Like I said before, the monsters in this film were awesome, and every time they were on screen, I was totally hooked. The movie should’ve focused entirely on them and the characters’ struggle against them, and if it had, it almost certainly would’ve been great. But unfortunately, the filmmakers instead chose to throw in a whole bunch of other stuff that didn’t work at all, so on the whole, the film’s weaknesses far outweigh its strengths.

They Crawl Beneath hits VOD, DVD, and Blu-ray on October 4.