I have to be honest, Piggy isn’t the kind of horror I’m usually drawn to. I tend to prefer evil spirits and supernatural (or at least preternatural) monsters to straight-up human horrors, so I took a bit of a chance with this film. I had heard a ton of good things about it, and the trailer looked fantastic, so I figured this might be one of the exceptions. And you know what? I was right. After getting the chance to see it, I’m happy to report that Piggy lives up to the hype.

The film was written and directed by Carlota Pereda, and it stars Laura Galán, Richard Holmes, Carmen Machi, Irene Ferreiro, Camille Aguilar, Claudia Salas, and Pilar Castro. It’s about an overweight teenage girl named Sara who’s constantly bullied by her peers, and one day, she witnesses some of her tormentors being kidnapped by a man who seems to have taken a liking to her. The guy also commits a few murders, and when the police start asking questions, Sara is torn. Should she reveal the truth and potentially save the girls who made fun of her, or should she let them get what’s coming to them and protect the one person in town who seems to appreciate her?

As you might be able to tell from that plot synopsis, Piggy is a slow burn. In fact, it’s not even what most people think of when they think about horror movies. For most of its runtime, it doesn’t rely on overt scares or brutal violence. Instead, it’s more about Sara’s dilemma and the fact that there’s a killer on the loose, and aside from a few scattered scenes here and there, it only starts to lean heavily into the horror for the last 20 minutes or so. 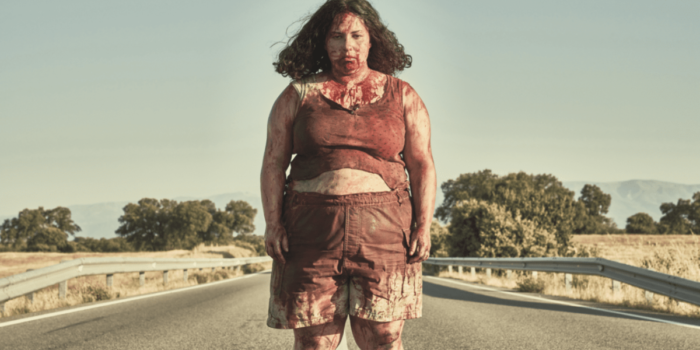 Because of that, this film stands or falls on the strength of its characters, and thankfully, they’re more than up to the task. The acting here is excellent all around, so I had no trouble at all believing these characters. For example, the girls who make fun of Sara act pretty much exactly like the mean kids I remember from my high school days, so it almost feels like the filmmakers just went out and recorded teenagers actually bullying one of their classmates.

But hands down, the best and most important character in Piggy is Sara. She’s the heart and soul of this film, and actress Laura Galán absolutely owns the role. She’s so good you can almost feel her pain from the abuse she experiences day in and day out. That pain is always there, so even when she’s not being picked on, you can still see it in her facial expressions and her body language.

Maybe it’s because I was also picked on as a kid, but for me, that constant anguish made Sara super likable and sympathetic, so I connected with her right away. I genuinely cared about her and her story, and that kept my eyes glued to the screen the entire time. Even when there wasn’t anything particularly interesting going on, I still enjoyed spending time with this character and seeing her life play out, so she carried this movie from start to finish pretty much single-handedly.

And that’s important because, for a large portion of Piggy, the plot more or less comes to a standstill. Once Sara witnesses the kidnapping and the police begin asking questions, the story kind of stops moving forward, and it becomes more of a character piece focused on Sara’s anguish and her dilemma. This part of the movie could’ve easily become intolerably boring without Laura Galán’s great performance, so in a very real sense, she saves the entire film. 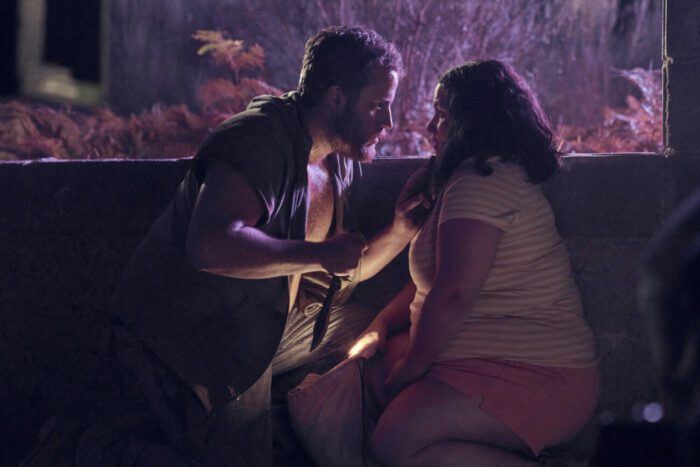 The movie does eventually pick up the pace, and as I said before, the last 20 minutes or so really lean into the horror. But even then, it’s still not the kind of horror that comes to mind when most people think about the genre. It doesn’t try to be particularly scary, and while there’s a fair amount of blood and gore, it never goes all out.

Instead, I’d say that the final act of Piggy is almost more action thriller than straight-up horror. Sure, it’s horrific enough that it stands firmly within the horror family, but it’s not what mainstream audiences normally want from the genre. So if you’re looking for something like Paranormal Activity, Halloween, or even Don’t Breathe, you’re not going to find it here. However, if you enjoy movies like Revenge, The Nightingale, and Becky, then I think you’re going to dig the horror we get in this film.

So at the end of the day, if this sounds like your kind of movie, I highly recommend Piggy. In fact, even if it’s not what you typically go for, I still suggest checking this one out. Like I said before, it’s not my preferred kind of horror, but it’s so good that I still enjoyed the hell out of it. So if this sounds like the type of film you might even potentially enjoy, do yourself a favor and give it a watch. With its great performances, super sympathetic lead character, and enjoyably bloody horror, I think you’re really going to like it.

Piggy will release exclusively in Alamo Drafthouse Cinemas on October 7, and then a week later, on October 14, it will expand to additional theaters and become available at home on VOD as well.