One thing a lot of critics do, myself included, is compare the film we had just seen to others of a similar ilk. Now, that is not a bad thing, as it could possibly help a potential viewer to watch, or skip, a film. If you hate the film Scream and something is compared to being like Scream then you might have been predisposed from the beginning to not want to see that film. On the other hand, a false or incorrect comparison could lead to you being let down with the film you just experienced. Even though I have tried to condition myself not to search Letterboxd or IMDb before watching a new film, I broke my rule for this one. The thing is what I was predisposed to believe I was going to watch was very wrong. 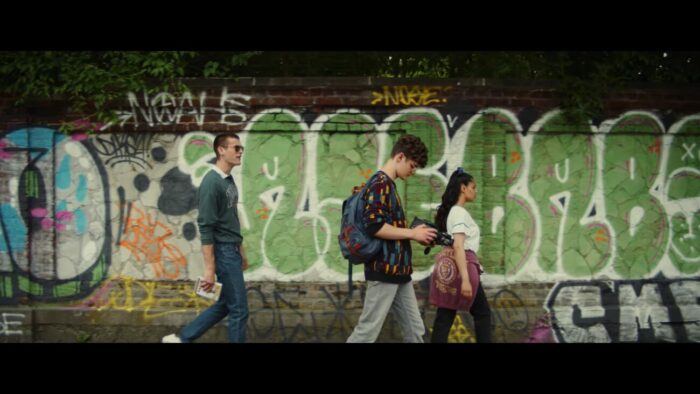 Every review, be they paragraphs or the one-word Letterboxd ‘funny’ reviews, has compared Deep Fear to As Above, So Below meets The Descent. Well, that is only partially right. Taking place deep in the heart of the Paris catacombs, it’s hard to not draw comparisons to As Above, which is a film that really brought the horror of the Paris catacombs to an audience who may not have known they were even a thing. Where all of these reviews go wrong though is the second comparison, The Descent. This could not be farther from the truth. The Descent is atmospheric and subtle, while Deep Fear starts slow and creepy and devolves into a creature feature more akin to Dead Snow.

Deep Fear takes place in Paris, France in ’91, though everyone keeps saying the ’80s for some reason. A group of friends is hanging out before Henry (Victor Meutelet) ships off for military duty. Sonia (Sofia Lesaffre) vows to give Henry a great last weekend send-off before his indeterminant amount of service is going to start. While at a bar with their friend Max (Kassim Meesters) they ponder what the next day should have in store for them. This all changes when Sonia’s gun-toting drug dealer Ramy (Joseph Olivennes) promises Sonia a day that none of them will forget. As you probably guessed, Ramy plans on taking them to the catacombs.

Max is hesitant from the start, acting as the group’s pseudo harbinger. Upon arriving at the catacombs Sonia, Henry, and Max are met with a fake fright from Ramy’s cata-friends, a group of people who know the catacombs inside and out. They all have a conversation about the White Zone, a part of the catacombs they have known about but up until recently had no way of being able to reach that section. Not only do our group of urban explorers weave and wind through the endless maze of the catacombs, but they also have to deal with a roving gang of skinheads, bear traps, and even trip mines! This movie takes so many different directions and it is welcomed for many reasons. 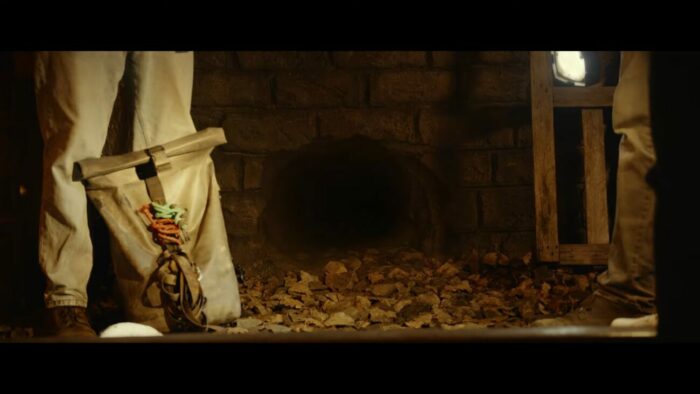 To start we should talk about the set. As with As Above, the catacombs act as a character themselves. Small corridors give way to large ones full of stones from different places in Europe, really giving the catacombs a character. The small tunnels the explorers have to crawl through shake and drop debris as they crawl through them. This is something the professional explorers write off, but Max is understandably turned off by this. You could make an argument that the tunnels drop debris and shake as they go through them because they’re old and people keep brushing up against the roof of the tunnel, I personally have a different idea. I could be reaching here, but I like to think falling debris in the tunnels is the tunnel itself warning the explorers to either leave or not go too deep. Whatever the reasoning is, the scenes of our characters crawling through them are absolutely spine-tingling and claustrophobia-inducing.

I’m not sure if Deep Fear was actually filmed in the catacombs or on a set, or a mixture of both. Wherever it was filmed it looked gnarly as hell. One thing that really impressed me was not showing the bone walls. This film seems like it was working against itself against their will. As Above, So Below really became a genre icon film, I personally know many people who don’t like horror but are aware of and have seen As Above, So Below. What’s unfortunate for every film that plans to take place in the Paris catacombs now has to face As Above, mainly because they did it perfectly. Deep Fear takes the idea and fear of the catacombs and puts a new and fun twist on it.

Grégory Beghin does an excellent job at the helm of director. He was able to effectively translate Nicolas Tackian’s script into a visually pleasing piece of horror. (Okay, so I wasn’t going to write this but I wasn’t happy with how I ended this review.) Look, I get it that horror, and art, are subjective. What one person hates will be another person’s favorite. That being said, the reviews for this film are disheartening. Sure the film is a little messy at times, but it knows what it wants to be, the filmmaker understands what he wants it to be, and it is effectively executed. Whether or not the director pulls off what they want is up to the audience, and I think they pulled it off all around. Also, the number of comments I have been reading saying they are trying to “Stranger Things” the main actors have made me grit my teeth in anger, the reviews like that are obviously just jaded to be jaded. 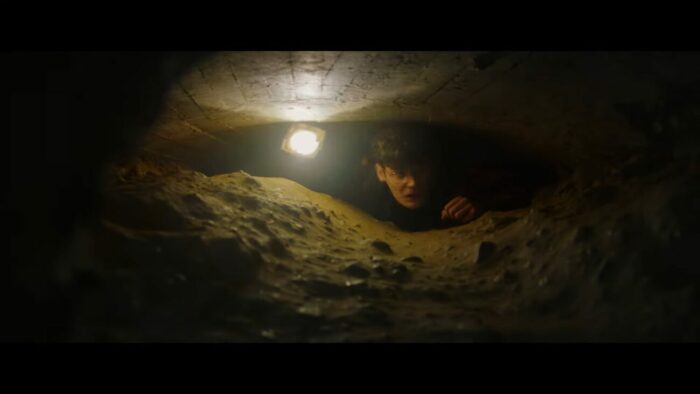 Deep Fear is a fun-ass movie. There are some wonderful practical effects in it, as well as some really good-looking visual effects; though the film doesn’t rely on either. The atmosphere created by the weird mannerisms of Ramy to the roving gang of Nazis really brings this film together into a subjectively cohesive film. I could only imagine the impact a film like this would have in a packed theatre full of people ready for a rowdy midnight movie.