It’s no coincidence that Nope, the latest film from horror icon Jordan Peele, starts out with the words of a minor prophet. “I will cast abominable filth upon you, make you vile and make you a spectacle,” spoken by the prophet Nahum, is certainly a striking quote in line with Nope‘s primary theme of spectacle and our destructive obsession with it, but more than that, it serves as the first of many biblical nods and themes present throughout the film.

Now, Nope is not an explicitly religious movie in the sense we generally think of one, i.e. Ben-Hur or The Ten Commandments. Indeed, overt references to the Bible are few and far between—and the ones that are present or closer to what you would find in the Book of Revelation than anything out of Christ’s teachings. The technician who helps Otis and Emerald is literally named Angel. The creature’s ultimate appearance resembles biblical descriptions of angels—Otis’ ominous, unanswered question of what a “bad miracle” might be. Emerald’s dream is described by someone else as getting “to the top of the mountain.” There are even exactly four horses featured prominently enough to give their names to Nope‘s “chapters,” the same number as the fabled Four Horsemen of the Apocalypse; yes, there are technically five chapters, but one of them is named for Gordy the chimpanzee, who is notably not a horse.

It’s not surprising to find biblical themes that a film focused on spectacle and the destructive hold it has over us. After all, spectacle and religion have long gone hand in hand, at least in the Catholic/Christian tradition. Think of most of the stories we typically remember from the Bible—most of them are indeed acts of spectacle: the great flood that covered the Earth, the ten plagues set upon Egypt, even the death and resurrection of Jesus Christ, carrying a cross throughout the city, only to be hung on it for all to see. All are feats of spectacle, meant to inspire awe at the sight of the power of God—and perhaps, a little terror as well. After all, it’s not called the fear of God for nothing.

“What if I told you that you would leave here…different?”

Throughout Nope, there’s a distinctly apocalyptic and biblical feel to its sense of awe and terror. When Jean Jacket—as the unknown creature comes to be known by the main characters—lingers ominously over the Haywoods’ house at night, it brings with it parallels to no less than three of the plagues sent to Egypt: water into blood, a storm, and darkness. When the creature consumes people or horses or bits of plastic made to look like horses, it does so by forcibly pulling them into the sky—a grotesque, violent take on the idea of being “raptured” into heaven, as most religions believe will happen when the world ends. But it’s one thing to simply point out that these biblical parallels are present in Nope, and another thing to try and figure out what meaning (if any) we’re supposed to try and take away from them. For that, we can turn to one figure in particular: Steven Yuen’s character, the doomed Ricky “Jupe” Park.

Park, former child actor and owner of nearby tourist trap Jupiter’s Claim, might dress like a cowboy and talk like a used car salesman, but his character and arc ultimately cast him as something closer to a modern day prophet or a televangelist. He presents us with a fascinating parable of sorts about the dangerous relationship between spectacle and modern-day religion.

John Oliver did an excellent deep dive on televangelists a few years ago, but the important bit of information to know about them is that they seek to exploit people’s desperation and faith in order to make large amounts of delicious, nontaxable money. As we find out at that ill-fated event, this is more or less what Jupe’s ultimate goal is in Nope, having spent the last six months presenting offerings to what he calls “The Viewers” with the goal of eventually being able to draw them out on command to be beheld by a viewing (and naturally, paying) audience—and also putting himself back in the ever addictive spotlight.

His introduction to the event even has a decidedly televangelist feel, for example, when he asks his audience, “What if I told you that you would leave here…different?” It’s not a perfect, one-to-one equivalent. There’s nothing to suggest that his audience came out of any religious or spiritual need, or really anything other than curiosity or the need to be among the first to see what all the buzz is about, but his message is ultimately the same one as that of the modern televangelist: a life-changing experience can be yours, just for the cost of admission, whether that’s a ticket to Jupiter’s Claim or a so-called “seed donation” that will supposedly return to you tenfold.

“I will cast abominable filth upon you, make you vile, and make you a spectacle.”

As we now know, the Star Lasso Experience ends in a horrifying fashion. Jean Jacket does indeed make an appearance, but instead of the horse presented to it on a modern-day altar, it decides to eat the much bigger meal that Jupe has presented, violently consuming the crowd of people gathered to witness its appearance, including Jupe himself.

Interestingly enough, this event is the first real act of carnage we witness Jean Jacket being more or less responsible for. Despite the terror that Jean Jacket induces from the very first time we see or hear it in Nope, it is quite notably not presented as a threat throughout the first half of the film. There’s an argument to be made that it’s never really much of a threat at all, provided you leave it alone. Yes, it fills the Jaws-style niche of “big scary unknown thing,” but before the disastrous Star Lasso Experience, the only person “killed” by Jean Jacket is Otis Sr., and that death is purely accidental. Jupe certainly didn’t mean to get everyone in attendance killed, but his fatal mistake lies in both feeding and unleashing something he can’t fully understand—and can’t really control. 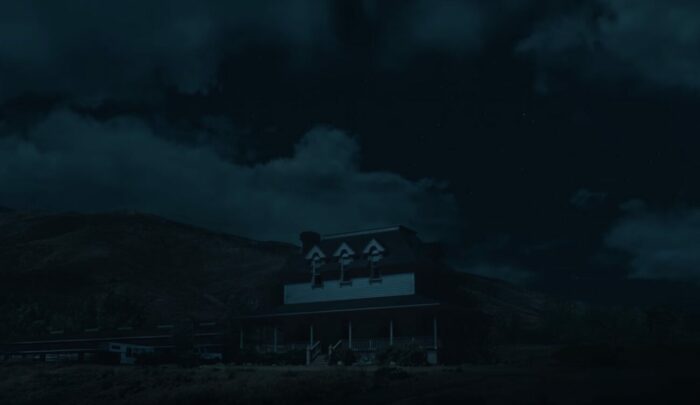 Those far-right televangelists and pastors that I previously mentioned? They’re the ones keeping that tradition of Christianity and spectacle alive and well in whatever way they can. As late as 2020, we were still hearing rhetoric about how homosexuality and “God’s wrath” was to blame for any number of natural disasters. And of course, more than a fair number of them latched onto what is perhaps the greatest, most destructive spectacle of modern times: the presidency of Donald Trump, leading to the devastation of COVID-19 and the election conspiracies that led to the January 6th attack. While there’s no evidence to suggest that the majority of far-right televangelists and pastors played a direct part in the events of that day, all you have to do is listen to some of the rhetoric being delivered to see the role they played in fueling the fires of conspiracy.

This, then, is ultimately the true horror of Nope‘s biblical themes and the parable it tells of one Ricky Park: it’s the all-too-real story of a modern-day false prophet, one who unleashes—and is ultimately consumed by—a borderline apocalyptic spectacle of destruction he can’t even begin to comprehend, all for the sake of trying to make a profit and put himself back in the spotlight. It’s a cautionary tale for people in modern-day America, and it speaks to the true power of both Nope and of Peele as a filmmaker.