Tales of the Walking Dead Episode 5, “Davon,” was another ambitious effort that will likely divide the audience. It had no connection to the larger narrative, but much like last week’s episode, it told a captivating story that if nothing else and asked tough questions and showed us what’s happening in the rest of the world. We’re about to get into heavy spoiler territory here so if you haven’t seen Tales of the Walking Dead Episode 5, proceed with caution.

Tales of the Walking Dead Episode 5 was written by Channing Powell, a long-time writer from the main series. I’m willing to bet that Powell is having a blast here in this spin-off (which he is the showrunner for), telling incredibly fun, off-the-beat stories. “Davon” was stylish, to say the least, playing with noir tropes and music, something that I’m willing to bet nobody saw coming in this franchise.

Davon, the main character for this episode, wakes up handcuffed to a zombie/walker who appears to be communicating with him. The zombie doesn’t try to bite him and in fact, seems incapable of it. In the early part of the episode, there’s a running theme of Davon’s guilt, which is an interesting topic for this franchise at large. A lot of people are forced to do a lot of things that they aren’t comfortable with. But what did Davon do in Tales of the Walking Dead Episode 5?

The noir-style flashbacks tell a story of Davon being rescued by two women, and we get hints of the “woman in trouble” trope being set up. They tell him that he’s in Maine, despite him thinking he was in Montreal and the women have heavy French-Canadian accents. This is a part of the country we haven’t explored yet in the franchise, and we haven’t crossed the northern border yet either, so this felt exciting.

I particularly enjoyed the sax-infused jazz score, really doubling down on the noir aspects of this story. It felt fresh, completely unlike anything else we’ve seen in this franchise. Sure there are zombies, but this story seemed to be about people with a mystery dangling in the background. 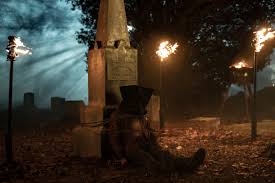 We eventually see Davon tied to a tree, surrounded by an angry mob. We have no clue what this man did, but he’s being blamed for the death of a woman and children. Do we have some Lost Highway-type psychic fugue story happening here? Is David Lynch directing Tales of the Walking DeadEpisode 5? As cool as that would be, the conclusion would be pretty quality as is.

As it turns out, Davon did kill the woman he was accused of killing, and he handcuffed himself to her before she did. But she was the one killing the kids, along with her older son. “Murder is mercy” was their battle cry—a dark cry indeed, which brings up rather dark questions to ask.

A life worth living?

The true villains of the show, the mother and son that were killing the children, felt that death was a better alternative than how these kids would be forced to grow up in the apocalypse. “Murder is mercy.” A desperate desire to cling to old world norms and resistance to the things that needed to be done to survive the new world lead these two to poison kids.

As dark as it is, the point is one I’m sure others have thought about. A sense of defeatism would take over, and the will to live and rebuild is replaced by a deep sense of no way out—a sense that death is inevitable for everyone and life simply isn’t worth living. Davon’s point in Tales of the Walking Dead Episode 5 was that things didn’t have to be so inhumane. That some norms from before could be restored and people could be civilized. It’s a very Rick Grimes way of thinking, something that we’re used to in this franchise. But is there any turning back? Or are humans simply doomed? I also really enjoyed the topic of guilt. As people progress through the apocalypse, there would inevitably be some who grow more and more cold, numb to the things that have to be done. They survive, almost on autopilot, with no hesitation at committing an act of violence if that’s what needs to be done.

But then there are others who would struggle with this. Who would carry guilt because it goes against their nature to hurt, steal or do wrong to others? What would this guilt look like for them? How would it manifest? Could it be overcome? Finally, is there a happy medium like both Davon and Rick Grimes seem to think? Can old-world morales work in an apocalyptic world? It’s a very human question and one that could be debated over forever.

The final thread of this episode to go over was the mob-like mentality that seemed to run through this community. This group of people turned their anger, their desire for blood from one person to the next easily and it felt…a little too close to home.

Halloween Kills also touched on this subject, and while Tales of the Walking Dead Episode 5 didn’t beat us over the head with it, it was done in an effective and thought-provoking manner. When the world feels dark and hope feels lost, are we as humans prone to this type of behavior? Banning together, out for some sort of retribution just to make ourselves feel somewhat better, even if our anger is misdirected? It’s uncomfortable to think about and good art does just that.

Tales of the Walking Dead Episode 5 made for a great hour of television that existed inside this universe but had nothing to do with our main narrative. And that’s okay. The story was creative, it was stylish, and gave us something to think about—a few things, actually. This episode is another solid entry in this anthology series.