I wasn’t sold on the concept of Tales of the Walking Dead before starting this limited edition series, I must admit. The Walking Dead at this point is made up of a large narrative universe and heading into the final run of eight episodes of the flagship series, is a series of isolated stories worth our time? After watching the first episode, titled “Evie / Joe,” starring Olivia Munn and Terry Crews, I must admit that I was wrong. Tales of the Walking Dead Episode 1 was an artistic triumph. We’re about to get into spoiler territory here, so proceed with caution.

The episode begins with an introduction to Joe, played by Terry Crews, that felt iconic. You instantly fall in love with this character and his quirks, partially due to the strength of Crews’ acting chops but also the writing. We see within minutes that Joe is a survivalist who loves his dog. Surviving the apocalypse wasn’t an issue for Joe—he had been preparing for this kind of thing his whole life, and he’s got the well-equipped bunker to prove it.

An attack by the zombies / walkers / toe tags, as they’re called in “Evie / Joe,” does end the life of Joe’s faithful companion, Gilligan and kick starts Joe’s story here. But by this point, we’re already heavily invested in Joe, his over-the-top pajamas with dogs on them, and his ability to watch old football games and act as if they’re still new. Joe’s introduction really made me wish that he would be a series mainstay and not a character limited to a one-episode arc.

We learn that Joe had an online relationship with a fellow survivalist, and following the loss of his dog, Joe decides to load up his motorcycle (complete with side cart) and brave the Ohio roads en route to Michigan where he can hopefully meet this woman he was communicating with before the world fell apart. Tales of the Walking Dead Episode 1 would give us a second really strong character that I genuinely wish we could keep in Evie, played by Olivia Munn. A free spirit whose New Age practices lead to several punch lines in the episode, Evie captures Joe while he’s traveling near her home and decides to take him as her hostage. Much like how Joe was on the road in search of love, Evie also wants to go to Michigan to attempt to be reunited with her estranged husband.

Evie’s catchphrase “May your next life be better,” which she says after every zombie is killed, is much more than a cute line designed to generate laughs. It is a thought-provoking line in the sense that what the characters in The Walking Dead universe are experiencing is a hell of sorts. Perhaps not literally but figuratively for sure. As we near the end of the flagship series, will there be any peace for these characters? Will their “next life” be better? Is there any true escape from a zombie apocalypse ever?

As someone who follows The Walking Dead universe, there are many characters over the years that I’ve loved, but Evie, as well as Joe, felt really well-rounded instantly. You feel like you know them and who they are, what they believed in, and what their fears are, in just a matter of moments. Perhaps it was due to the level of freedom the writers had. They didn’t have to work them into long-term stories. They could just write these characters to shine in their one hour of TV time because there was no tomorrow so to speak. But that doesn’t mean that there isn’t a sense of sadness that we won’t see them again. 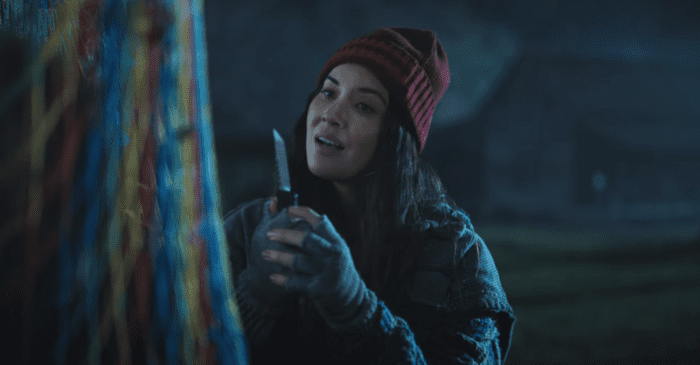 The crux of this story is the road trip Evie and Joe go on in Tales of the Walking Dead Episode 1. For the first leg of the trip, Joe was still treated as Evie’s prisoner. This led to a rather tense conversation but the subtext here was that we had two very lonely people who did desire human companionship.

Joe had avoided human contact for years, isolating himself as a survivalist. While Evie’s isolation was more short-term, she still had been on a quest to find herself. Here in this new world, both Evie and Joe were discovering who they were and what they needed. Living through the COVID era, I’m sure many of us can relate. Human contact has been reduced to a more virtual form, and while that’s better than nothing, it has its disadvantages.

After having Joe’s motorcycle stolen, the two got into an argument and went their separate ways. Evie discovered that her ex had indeed painted one of his trademark “angry paintings” about her, which helped her let go. Joe wound up in a much more precarious situation.

Joe did find Sandra, the woman he had been communicating with online. Unfortunately, Sandra had a habit of letting people into her bunker, drugging them, and then killing them. It was over the top and really came across as a different kind of horror than the zombie-fueled stories we typically get, but Tales of the Walking Dead can get away with that.

The conclusion saw Evie arriving and saving Joe and the two of them walking down the road together, having found each other in the middle of this hellscape they’re living through. Tales of the Walking Dead showed here in Episode 1 that smart, character-driven stories can be artistic triumphs for the show. While the odds of either Terry Crews or Olivia Munn showing back up again are slim to none, we will always be wondering what happened to them.

Timeline-wise, this seems to be set very early into the apocalypse—Year 1 or 2, meaning that this story takes place about a decade before our current action. It’s a nice world-building piece, showing more of our “zombie apocalypse past” and also reminding us of what our main characters from the series were like back then. What would the hard years to come do to Joe and Evie? Perhaps we’ll never know, but thanks to Tales of the Walking Dead, we got to meet them, enjoy their stories, and add to this universe more.

May your next life be better.