SyFy just released a trailer for Chucky Season 2, and it looks like it’s going to deliver just as much classic blood-spattered Chuck, delivered with the usual touch of tongue-in-cheek camp as Season 1. The trailer is chock-full of images that promise an interesting continuation to the Chucky tale. Some scenes are reminiscent of past Chucky films.

We’ve been following the developments for Chucky Season 2 as casting has been announced. The trailer shows last season’s teen protagonists as they attend a Catholic school, which echoes Child’s Play 3, during which Andy was sent to a military school.

The cast from Season 1 returns, including Fiona Dourif, whose character, Nica’s, fate was questionable at the end of Season 1. The trailer shows her at Tiffany’s mercy. Devon Sawa returns as a different character. Sawa played Jakes father and uncle, who were both killed in Season 1.  It was also announced that Gina Gershon, Tilly’s co-star from Bound is part of the cast. 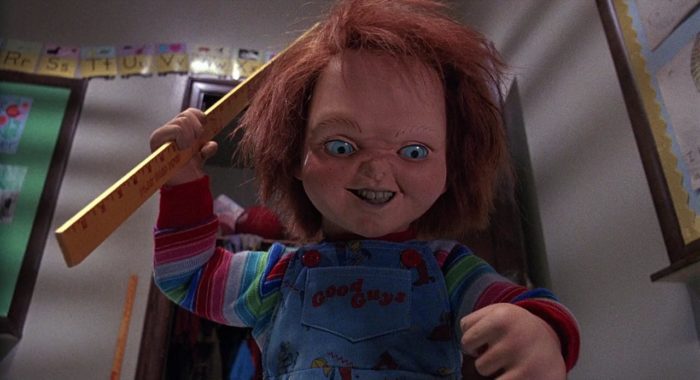 The trailer promises an action-packed and blood-soaked season. We see shots of a priest trying to convince Season 1’s survivors that Chucky is just a doll. Plus, Chucky terrorizes a Catholic school. Chucky makes a fun play on words with his original catchphrase as he says to a nun, “Hi, I’m Chucky. Wanna pray?” Chucky and Tiffany’s children, Glenn/Glenda, return in a pink car with a They/Them license plate. Tiffany dramatically greets Glen/Glenda at the door, giving vintage movie star vibes complete with a turban. The trailer also shows Nica at Tiffany’s mercy, and someone named Kyle who is a student at the school. We also get a shot of someone wanting revenge against Tiffany.

Chucky Season 2 premiers on October 5 on USA and Syfy.