There were many different ways, at least six, I wanted to start off my review of Nick Cutter’s The Troop. One was going to be a long ridiculous story comparing humans to long parasitic worms poisoning the figurative insides of the earth, another opening was going to be me talking about how, after reading this, whenever I get hungry I feel a weird crawling under my skin. The most interesting idea I had to open this review was to reference other horror novels that have broken the mold of what we think the structure needs to be for a successful novel. I threw that all away and decided to be as candid as I possibly could because that is the heart of this book…truth. Nick Cutter is unlike most authors out there, he pushes the boundaries of what we think a novel can be. On top of that he doesn’t just scare, he scares well.

The Troop is equal parts epistolary, courtroom drama, terrifying quar-horror, and sci-[non]fi blended together to make one supremely fucked up genre-bending novel. With the exception of Mark Z. Danielewski’s House of Leaves, I can’t really think of too many horror novels that really take the structure of the novel and bend it to such an interesting breaking point. While that is the only parallel it really has to House of Leaves, they both succeed tenfold. Cutter brings the story to us in many different ways. He tells us the story of the preliminary lab trials through pages of evidence logs, gives us glimpses into the future and provides expert exposition through news articles, and (my personal favorite) grills the scientists responsible with a series of transcriptions from court stenographers. 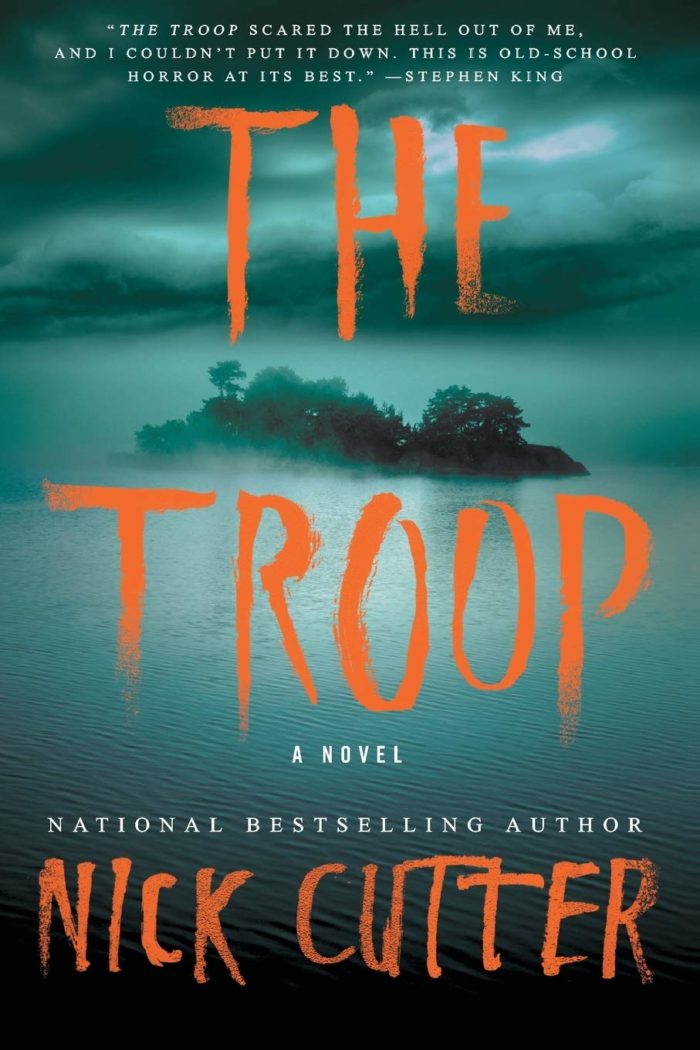 While it could be described as Lord of the Flies meets Cabin Fever if David Cronenberg directed it, The Troop is a story about survival, friendship, adolescence, and worms (hydatids)…lots of worms. Scoutmaster Tim takes a group of scouts on a weekend camping trip to Falstaff Island. The story starts fairly straightforwardly, taking its time to give us introductions to each character. From the start Shelley was my favorite character, and, unfortunately, he stayed my favorite character. On their first night there, a strangely skinny and ever-hungry man appears on the isolated island. After realizing something was wrong with this man, Scoutmaster Tim quarantines the man in his cabin. Tim, who is the town’s physician, ends up recruiting the help of Max, whose father is the town mortician/taxidermist, to perform surgery on the man. The secrets these two find hidden deep in the gooey insides of the man may just very well lead to endless bloodshed.

One of the most intriguing aspects of The Troop is how Cutter doesn’t stray away from giving us every minuscule gory detail surrounding these children. Like Salo or Trick ‘r Treat, these children are put in peril and we will be privy to every single bit of horror they must endure. Unlike Salo, none of the situations feel like they are in bad taste, and most situations are handled with tact. It doesn’t seem like Cutter put these children in peril just for the hell of it. Rather, each situation gives the children a chance to grow or learn something about themselves or life. The scouts never have a deus ex machina moment. They earn each their story beats through collective work and the limited life experiences they already have. It is a pleasant mixture of luck and using the lessons in life they have already been taught.

To go back to an earlier statement, I think my favorite character has to be Shelley (and if you’ve read the novel, I’m sorry). While Max may be the most redeeming character, I feel Cutter took the most care with Shelley’s background and had more of an opportunity to flex his nightmarish muscles, rather than the other characters. The two kids we get the most backstory on are definitely Max and Shelley. For quite some time I really thought Shelley would be the one to lead the kids to safety, which would have made for an amazing character arc, but I couldn’t have been more wrong.

Shelley is a psycho in the making, a real future Bundy. The situations Shelley “finds” himself in are absolutely abhorrent and so insanely well written. Through each bit of backstory, we are delivered about Shelley he grows more and more antagonistic and grotesque. I just couldn’t help but feel drawn to Shelley’s character because of how well Cutter wrote him. We’re given a rising escalation of Shelley’s actions, though it is told to us disjunctively, starting with the crawfish moment and later being given the cat story. Shelley may just be one of the most fleshed-out and interesting antagonists in recent horror.

On a quick note about the evidence logs and courtroom interstitials: it’s impressive how academic they sound while also being very grounded. At no point reading these did I feel too dumb or out of the loop with the scientific bits. There are some interesting science words thrown around, but at the end of the day, they are written so well and provide enough context clues that it flows just as easily as the rest of the novel. Also, that poor Guinea Pig.

When reading this novel, I had such a clear picture of every single aspect in my head, and couldn’t help but wish I could turn this into a mini-series. Cutter’s words are so precise that I found the camera directions naturally flowing into my head. Unfortunately, I missed the boat, heh, on that as Deadline reported a little over three years ago that James Wan’s production company Atomic Monster has purchased the filming rights for The Troop with none other than E.L. Katz set to direct! While I was not able to find much more up-to-date info on it, I really hope something comes out of this because I think it would transfer into the film medium incredibly well.

The Troop was a pleasant surprise of a read. I had been recommended it for quite some time, and finally pulled the trigger on it. It’s a shame I waited so long as Nick Cutter’s novel surpassed every bit of expectation I had for it. I started reading it in New Jersey, picked it back up in France, and finished in New York, and, oh boy—just imagine the horror I was going through reading this on a PACKED six-and-a-half-hour plane ride. The Troop would make a great summer beach read, or a cold day of being snowed in, hell, The Troop would make a good read at any point in your life. I cannot recommend this book enough, and it has without a doubt found its deserved place on my top 20 favorite horror novels list.