Imagine that two people—hundreds of thousands of miles apart, in a worldwide pandemic—create two uncannily similar films. One started filming just shortly before lockdown, while the other was filmed entirely in lockdown. This obviously can’t happen, right? One of these films must be copying the other…right? Weirdly enough, this is somewhat of a common occurrence in film. K-9 and Turner and Hooch were both released in 1989; Friends with Benefits and No Strings Attached were both released in 2011; and, most notably, The Illusionist and The Prestige were both released in 2006! Weirdly enough, it’s not that strange of an idea. It’s like how nurses say they’re going to be extra busy when there’s a full moon. Or, like when you’re singing a song to yourself, and then that exact song just so happens to be on the radio when you get into your car. While it may be busy in the ER on the night of a full moon, what about the countless other nights where it’s just as, if not more, busy? Synchronicity in the universe is not some higher being interfering to give someone a special moment in life. It’s just an occurrence that you take notice of. 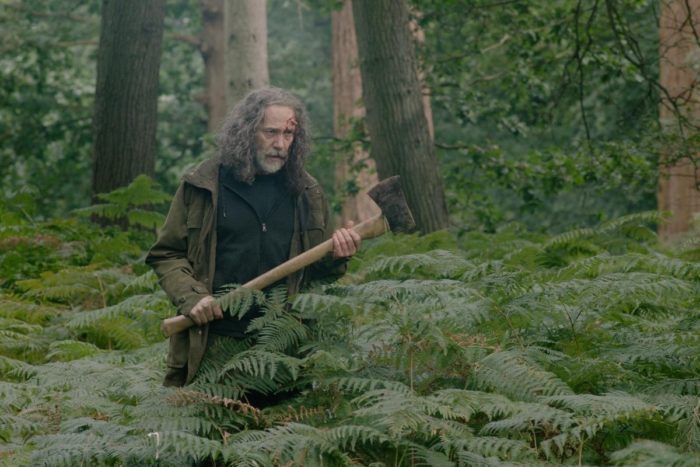 Gaia and In The Earth are quite similar films in many ways, and it’s not that weird that two films like this would come out around the same time. The world was scared of what was happening, people were flocking to isolated areas, and everything was up in the air as to what the right step forward was. Gaia and In The Earth are two films about the Earth, the human condition, and what it means to exist on a rock that has been here long before us and will be here long after us (well, that last part might not be as true). While the films have varying degrees of success in conveying their message, they both raise great points. Gaia is about what happens when the Earth gets angry and fights back, while In The Earth is the exploration of two people’s different approaches to what the Earth has to offer.

One of the main aspects both films explore is, not surprisingly, the concept of infection. In The Earth doesn’t have a typical infection, it’s more of an exploration of how the land is trying to keep the researchers inside its vicinity. It knows that if the researchers get out to the mainland, then it will be deforested and used for its resources. So, the land creates these clouds of fungus spores that can permeate the respirators of their hazmat suit, which effectively traps them on the land. On the other hand, the forest rangers in Gaia are not there for a nefarious purpose, rather they are thrust into a very wrong place at the very wrong time scenario. It’s explained later in the film that the fungus growing beneath their feet has been there since before “apes dared to dream of Gods.” The fungus here sort of has a mind of its own and dares to reclaim its land through the final foreboding shot of the film. Although it kind of feels like a “good for you” type moment. 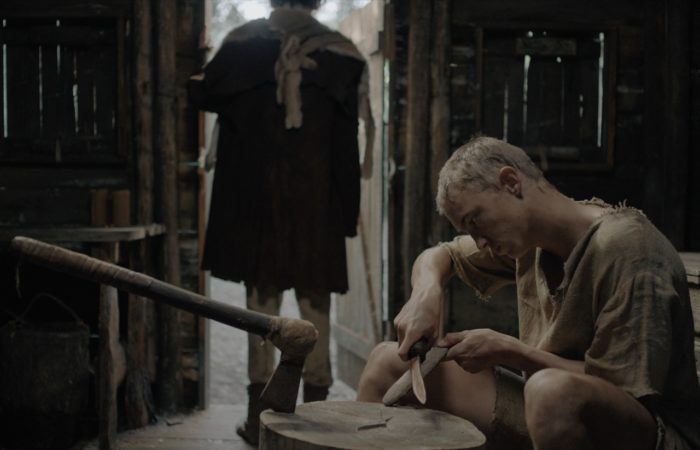 Both films explore the effects of the fungus/virus on its hosts. In The Earth has its hosts experience wild and psychedelic images from plants, to mushrooms, to clouds of spores. Gaia does the same thing, though its interstitials are used in a more reserved and useful way where it explores the idea of what the virus does. In The Earth falls into the Ben Wheatley LetdownTM category, where he uses flashy images and asks interesting questions but fails to follow through with any actual commentary. He uses these images to create feelings rather than to push the story forward. Oh yeah and cults. There’s a makeshift cult in In The Earth.

The last two big comparisons between these two eco-horror films are the color red and a foot injury. Both films use vibrant and beautiful colors, but again, to varying degrees of success. The color red is used heavily in both films, which makes sense since it’s a color of anger and rage. Wheatley uses red as a harbinger with little payoff, whereas Jaco Bouwer uses the colors to exist as a character trait of the world and its impending virus. It’s exponentially more beautiful in Gaia, as it feels a part of the world, rather than being retconned in to give a dopamine rush from pretty colors. What really makes the colors beautiful and work in Gaia is how natural they feel. In The Earth is full of color for color’s sake, while Gaia uses naturalistic colors that exist in the world and don’t feel fake—it’s substance and style. 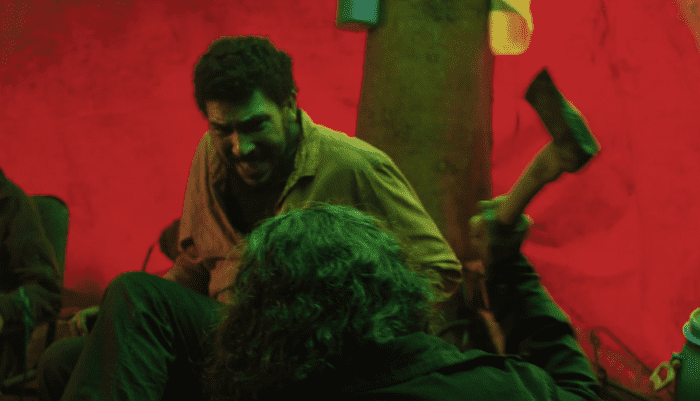 The foot injury coincidence initially seemed to be way too coincidental, until you take a step back and think about it. Both sets of characters have something to do with nature, one a forest ranger (Gaia) and the other a group of researchers (In The Earth). The forest rangers in Gaia are simply there to keep an eye on things and observe the natural order, whereas In The Earth follows people who want to use what’s in the earth. The two groups of characters both have to traverse the earth, mostly by walking. The one thing that connects their physical body to the ground is put in peril through these similar foot injuries (a spike through the foot in Gaia and a random cut on the foot in In The Earth). Funnily enough, both foot injuries happen to the left foot.

Beyond these similarities is where the films veer off from each other. In The Earth is a flashy and ultimately dull film. There is a cult-ish subplot forced in that has no real use, except for a minor amount of character development. Early on, we are introduced to a mythical creature called the Parnag Fegg, which is described as the face of the sense you get from the forest. This is fine, it’s just not fleshed out whatsoever. One of the more interesting aspects is the biblical feel of the movie. One character, Zach (Reece Shearsmith), wants to understand the feeling the forest gives off and takes the more artistic and religious path by honoring the feeling with art and reverence. On the other hand, Dr. Wedle (Hayley Squires) tries to research and learn from her experiments, even going so far as to try and control the land/creature/virus through amplified plant sounds and blinding, epilepsy-inducing flashing lights. Despite a few standout scenes, like an amputation scene that is highly talked about, the film is ultimately underwhelming. In The Earth is not a terrible movie, but it feels hastily slapped together, and as a result, it largely falls apart. There are definitely better Wheatley and eco-horror films to watch than this one. 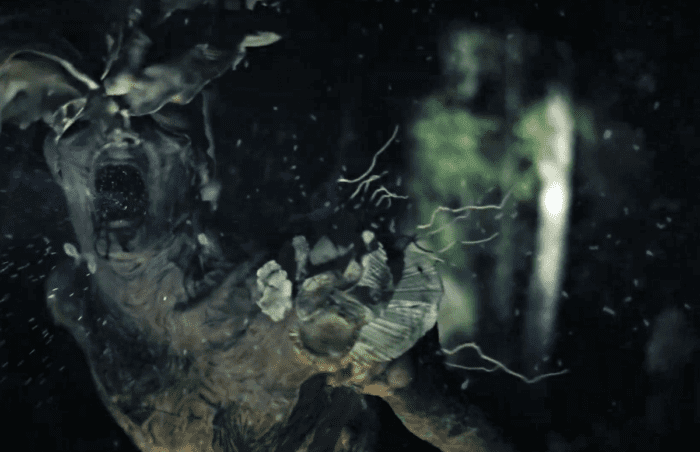 Gaia, on the other hand, has all the trappings of an intelligent film but is simple enough to get on a first watch. The film takes itself very seriously and really understands the best way to tackle the material. The practical and visual effects work hand in hand with each other to give us the most bang for our buck. Unlike In The Earth, every single frame in Gaia is important and helps to further the story. For a film that only has four actors in it, it feels so much more vast and intimidating than most films with a small cast. Also, unlike In The Earth, Gaia is engaging from beginning to end. The best part of Gaia is the creature design. While the creatures are reminiscent of the clickers from The Last Of Us, it’s based on a real-life disease called Ophiocordyceps unilateralis, also known as the zombie-ant fungus…and it’s dope as hell.

All in all, these two films would make for an interesting eco-horror double feature. But, be warned that there is a major quality change between the two. At the end of the day, both films are a commentary on our world, deforestation, climate change, and a whole host of other ideas encompassed within that realm. What is most terrifying about the ideas presented in these two films is the possibility of any of these ideas becoming true. If there’s a fungus that can basically turn ants into zombies, is there something that could do that to us?